Flip Houses or Rent Them? Which is the Better Investment? 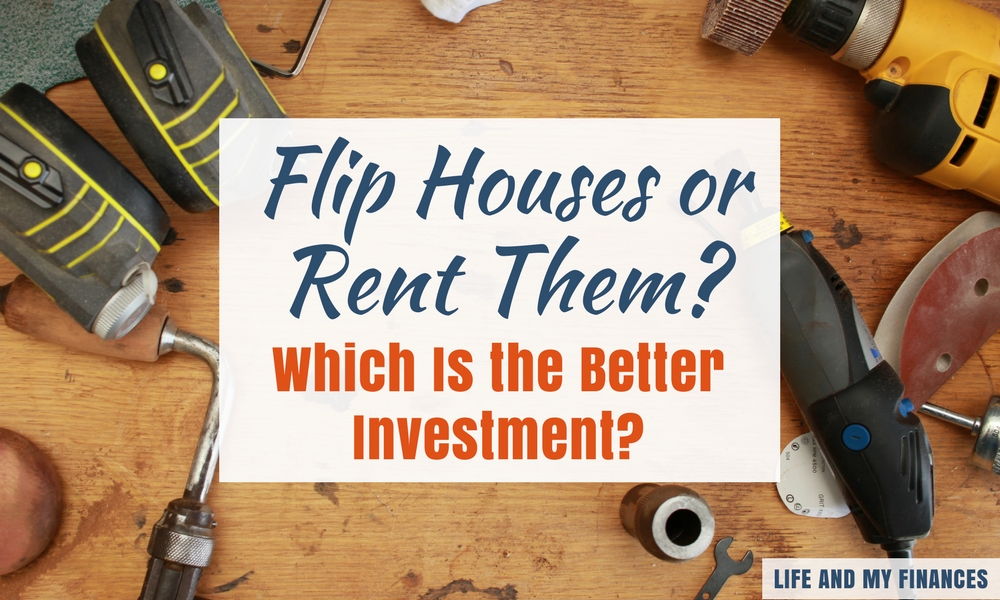 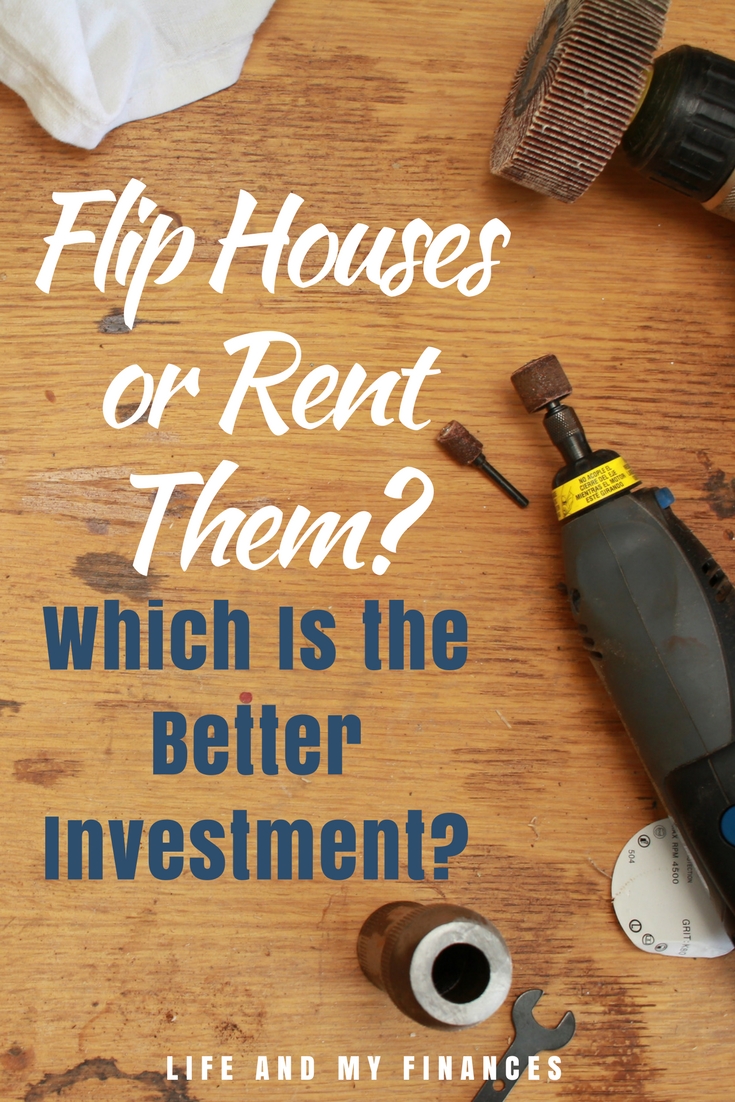 Have you ever thought about this? This debate gets almost as heated as the topic, “Should you pay your house off early?” (which, by the way, I definitely think you should!)! The question we want to focus on today is, “Should you flip houses or rent them?”

There are people that make $80,000+ a year flipping houses, and then there are those that earn $10,000 a year by renting them out. So which option is best? Well, before we dive into the answer, there are a few questions that need to be answered first.

Flip Houses or Rent Them? Which is the Better Investment?

Liz and I constantly find ourselves in this debate (even today). She likes the idea of a quick gain and cash in our pocket, and I prefer the buy, hold, rent strategy. So who is right? Naturally, since I’m a human being, I assume that I’m a genius and that she just doesn’t understand….but that’s pretty much the definition of arrogance I think…oops…

So…instead of being pig-headed and assume I know everything about everything, I figured I’d dig into the pros and cons to see what was truly the best investment tool: either to flip houses or rent them out!

The Quick Pros and Cons: Flip Houses or Rent Them?

Before we dive deep into the numbers and analyze the heck out of each scenario, let’s first take a step back and review the high-level pros and cons of flipping and renting. 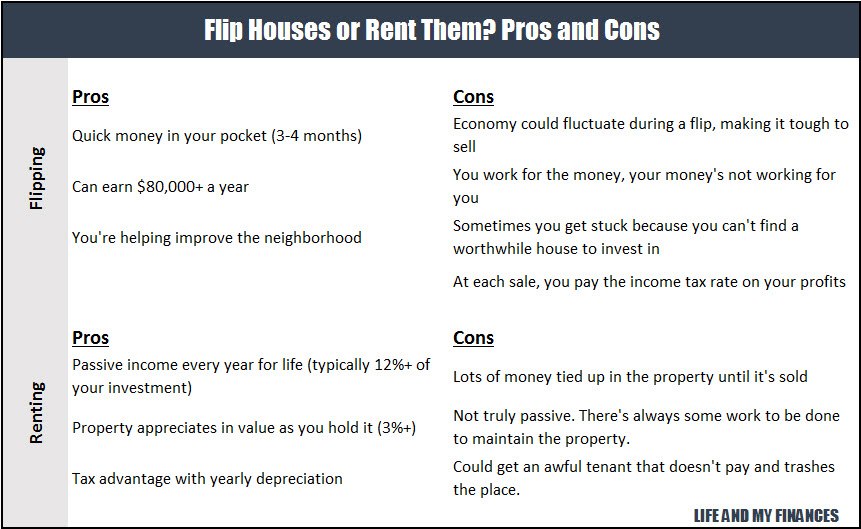 To be completely honest, after reviewing all the pros and cons, each option is looking pretty good. If you want to earn a great income right now, flipping houses looks awesome at $80,000 a year, but if you’d like to earn a passive income, renting out the houses makes a ton of sense.

So how in the heck are we going to decide which option is best? Well we’re going to make some charts of course (says the financial analyst)!! 😉

My sister and brother-in-law are master house flippers (check out their recent post about it here). They started with just $20,000 about three years ago, and five house flips later they’ve racked up over $200k. BOOM! Sounds like we may as well just stop this article now, right? House flipping is going to win hands-down!

Well…not so fast. Let’s slow down a bit and study the chart below.

When you’re actively flipping houses, you can earn about $80,000 a year by flipping 2-4 houses each year (depending how good you are at finding deals and how well you can stick to your repair budget). And, in order to make all those flips happen, the house flipper needs to put in about 14 hours of work a week, or approximately 720 hours each year (the orange line below).

But here comes the downside. If they stop, so does the money. Check out years 6-10. By cutting their hours from 720 to 0, the income takes a dramatic drop and no more income is earned.

So why on earth would this happen? Why wouldn’t you just continue to flip houses for life?

There’s a few reasons that I can think of:

Also, taxes can be a drag. If you’re earning good money at your day job and you’re flipping houses on the side, you’ll end up owing quite a bit in taxes at the end of the year – at least 25%. All that hard work for only 75% of the profits? This can really get some flippers down and discouraged, but that’s just the name of the game. There’s no changing it.

Renting Out Your Houses

With flipping houses, you can make bank almost immediately. Renting your properties out has the exact opposite effect. You’ll earn your money slowly, but it will compound over time.

Instead of being able to buy and rent out 2-4 properties a year, the buy/hold/rent approach takes more time because you’re never actually recouping your profits from the remodel (since you don’t sell the property). For this reason, with the same amount of money, the investor can only buy one property every two years or so (until things start to snowball). Also note that this takes less time – an average of only 182 hours per year instead of the 720 hours of the house flipper.

Check out the chart below.

Think of this as if it were a 401k investment. You put in $10,000 one year and it earns 20%. You now have $12,000. Can you go out and spend that money? No, it’s sitting in a protected account. But is it real money that you should count toward your net worth? Of course! The same is true with your rental home values.

In Year 2, we’re able to buy another property, fix it up, and add onto our yearly income (both with real income and again, the unrealized income from the fix-up).

Most importantly, take a look at what happens in Year 6.

Just like with the house flips, this investor decides not to invest in any more properties. Their labor hours drop from 182 down to 20 (not zero since the properties still need to be maintained), but notice the income? It doesn’t just go away like it did with the house flips! It stays steady because the rental houses are earning a passive income.

And, not only that, but they’re also:

Flip Houses or Rent? Tracking the Dollars per Hour

It’s tough to compare apples and oranges. Some people will fight you tooth and nail that flipping is better while others swear by renting out their properties to earn a steady monthly income, but which produces a better yield?

A great way to settle this debate is by looking at the dollars earned per hour.

In the first five years, the house flipper:

Which means that they earned $111 an hour. BOOM! That’s pretty impressive!

Which means they earned $221 an hour. WHOA! That’s HUGE! And nearly double that of the house flipper!

In the second five year span, the house flipper:

The investor with rental properties:

And, even if the rental investor just held onto those properties 10 more years, they’d just keep growing in value and in income!

Flip Houses or Rent? Which is it for you?

You know what’s crazy? Even with the charts and the dollar-per-hour calculations above, I’m still not going to say that EVERYONE should ALWAYS invest in rental properties. A single mold just doesn’t work for everyone.

If you were focused on making the most money you could in a 5 year span, then you’d probably have a better shot at hitting your goals by flipping houses.

If, however, you can handle the pains that come with a deteriorating house once in a while (and the occasional deteriorating renter ;)), then your money is probably better invested in a rental property.

Which will it be for you? Will you flip houses or rent them?