Him or Me?? Who Would You Rather Be? 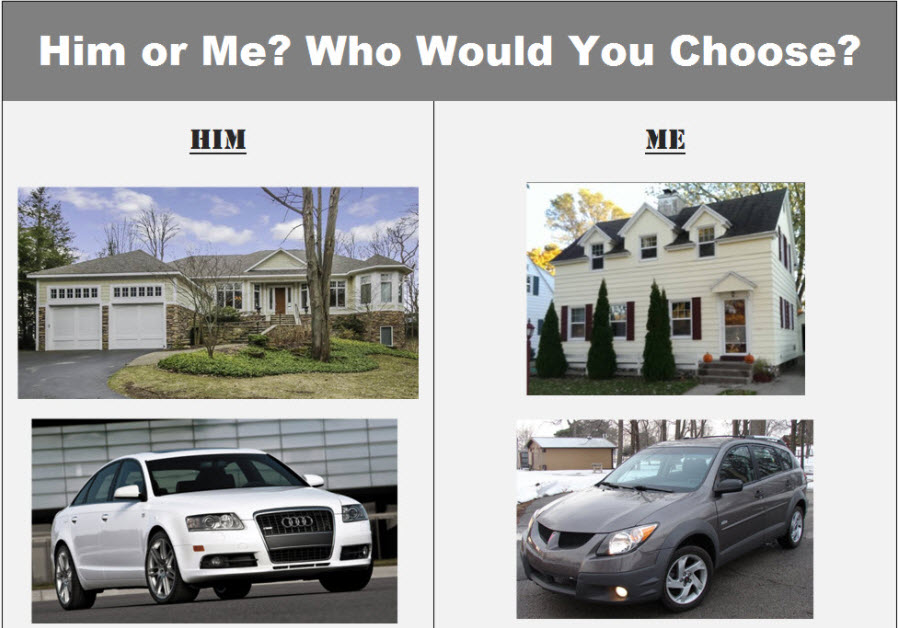 That guy at work…he’s got everything. The house, the car, the gorgeous wife. He’s the true definition of success, and if you could be anyone in the world, you’d be him.

Well…hold on now. Is your envy really warranted? Does this guy really have it all put together? Sometimes the picture from the outside is very different from the one on the inside.

Him or Me? Who Would You Rather Be? 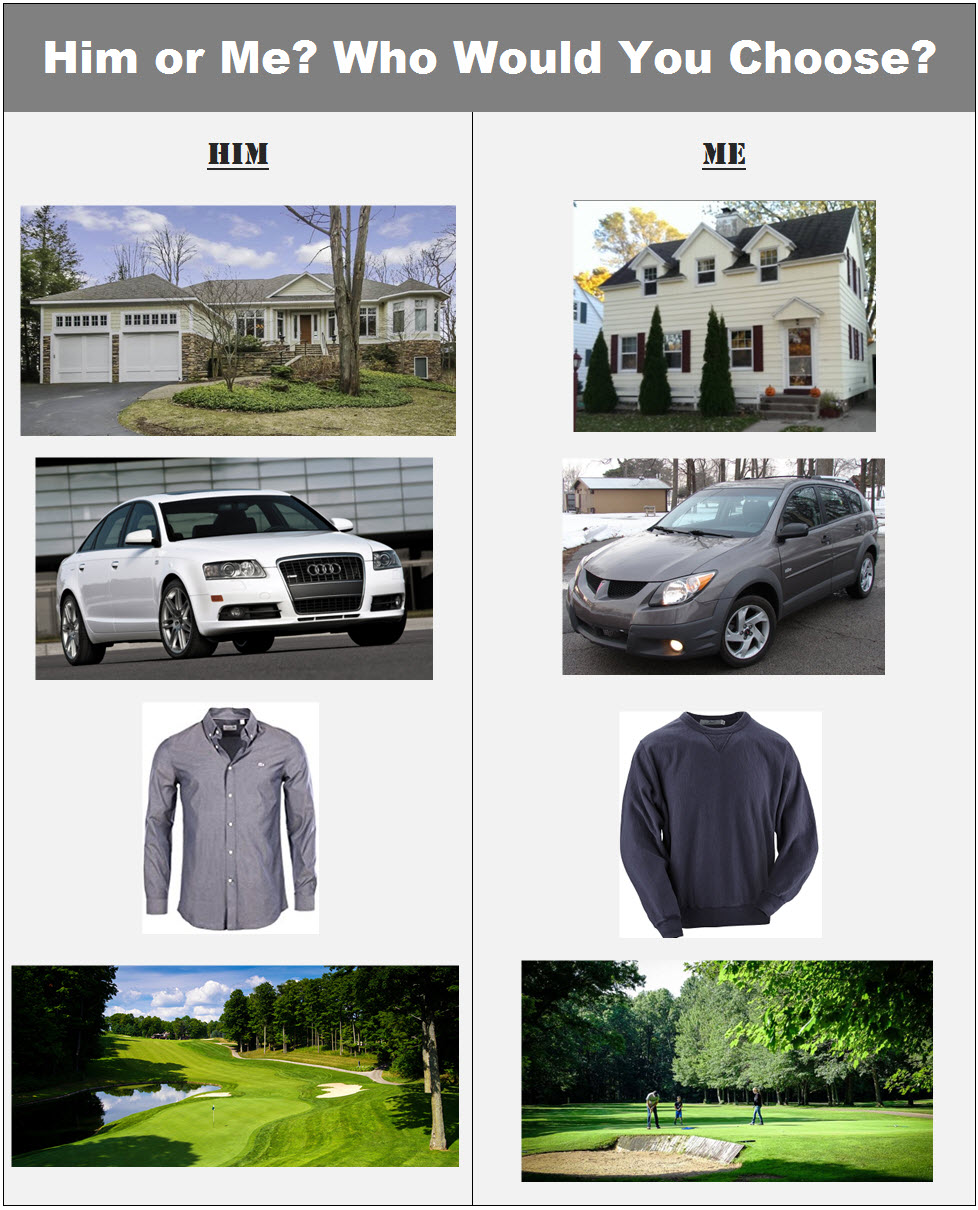 I, on the other hand:

So based on these factors, who would you rather be? The guy at work with the nice car, amazing house, stylish clothes, and expensive adventures? Or me with my mediocre house, car, clothes, and cheap entertainment?

Don’t try to spare my feelings. I know the answer. It’s the other guy! He’s got cool stuff and it’s easy to be envious of him. I get it!

But that’s not the end of the story.

The Secrets Behind the Stuff

In reality, the nice looking stuff comes at a price though. Let’s take another look at the graphic: 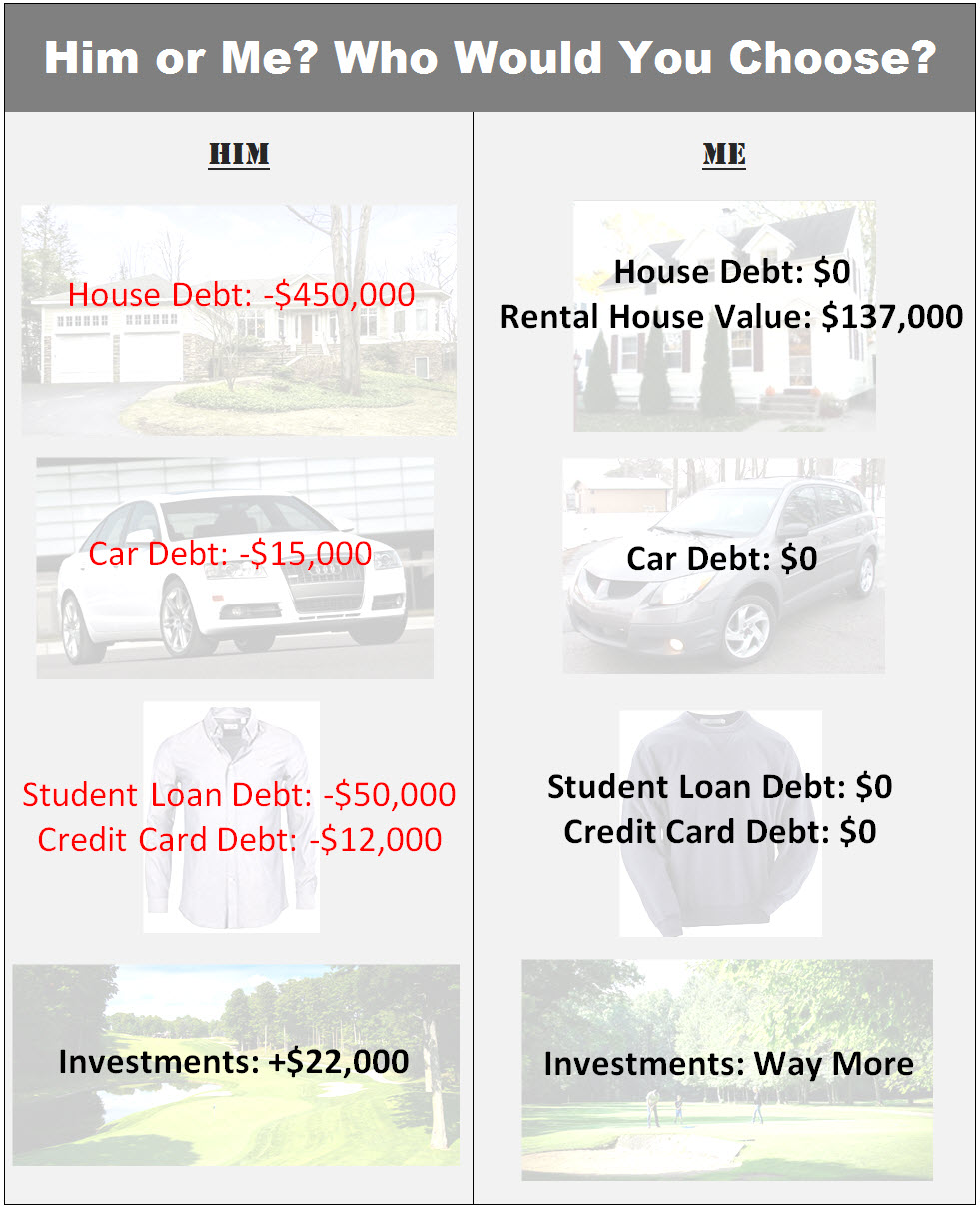 So what do you think now? Is the monster house and the foreign luxury car worth it, even with the mammoth debt attached to it all?

For me, it’s obviously not.

I feel a little weird posting stuff like this – like I’m trying to flaunt my status to the world. In reality though, I could care less (which is why I still live in the 1,400 square foot house, and absolutely love it). I write posts like this because I want you to know that it’s okay to live below your means.

What’s It Going to Be For You?

So what the heck is the point of this article? Is it that having stuff is bad? Or that you’ll only be happy if you live with as little as possible?

There’s absolutely nothing wrong with stuff. If you want a $75,000 Ferrari and you’re worth $5 million, then yeah, go buy the Ferrari. It, by itself, won’t make you more happy or unhappy. It’s what’s going on inside of you that makes all the difference.

Related: The Myth of Happiness…And How to Be Truly Happy

My friend, the guy at work, has a want for everything.

No matter what he has, there’s always something out there that’s more elite, shinier, and faster that he thinks will fulfill his emptiness inside. So far, it’s all been for nothing. He’s still as unhappy as ever, and he actually has more debt now because of it… Sad, but true.

So what about you?

Are you going to take on a bunch of debt and chase after all the high-class stuff in this world?

Or, will you be content with the stuff you’ve got, pay down your debt, and stock up your retirement fund so you can do absolutely anything you want later in life?

It’s your choice to make, and if I were you, I’d make it sooner rather than later…

Him or Me? Who would you rather be?