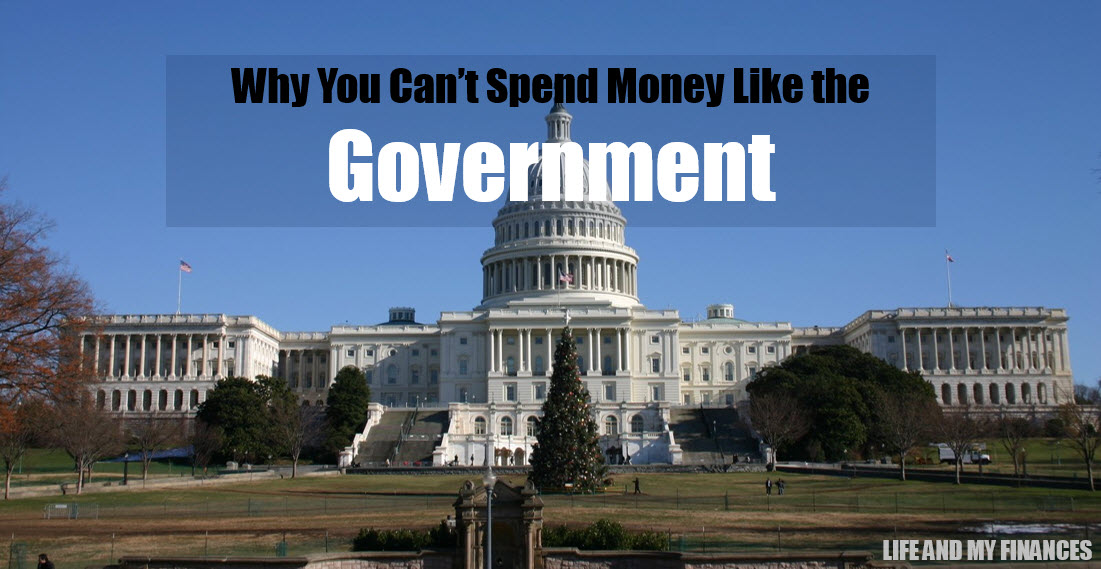 Another government shutdown is looming and what boggles the minds of most Americans is how can the government be so reckless when it comes to spending money.  This is not a political statement – it’s common sense.  Just image in if you ran your household budget like the bigwigs in Washington or even city hall.  It’s not hard to think of what would happen as bill collectors would follow you everywhere.

Related: What if a Typical Family Spent Like the Federal Government?

However, that still doesn’t give you a reason why you can’t spend money like the government.  While it might seem tempting, it’s just not possible and this article will give you more details on the reason why.

1) For Starters – You Have to Work for your Money

Unlike the Federal Government, you have to work for your money.  Now, this is not to say that the government is lazy.  In fact, there are hundreds of programs and thousands of workers who help improve our communities by the work they do.

However, the government has one massive advantage – they can print as much money as they want.  Think of the Treasury like your five-year-old with a set of crayons, as they are masters at spitting out colored paper.  Unfortunately, bankers on Wall Street and elsewhere are unlikely to accept the works of your beloved child as anything more than doodle.

Given this limitation, it means that you need to be more mindful when it comes to balancing the household budget.  Part of this means you need to work, and when times are tough you might even need to take on a second or a third job to make ends meet.

It also means that when you are in serious trouble you might need to turn to someone who can help you get out of the jam.  Examples include credit counselors and even bankruptcy attorneys like The Law Offices of David M. Offen.  The specialists can help you restructure your debts and even get free of bills.

However, it also means that you might need to live with the ramification of such moves.  While the specifics would depend on your situation, it’s not like the government who usually refinances their debt and just keeps making the interest payments.

It is safe to assume that most Americans want to protect the country.  However, when it comes to budgeting the government spends nearly half of the money it takes in on defense.  This would be akin to a family making $70,000 per year spending $35,000 or more on a security alarm, guard dogs, etc.

As you can see this doesn’t make sense and even worse it ends up meaning there is never enough money for those who do much of the heavy lifting – our veterans.  In fact, this group of Americans usually has a hard time making ends meet and while much the of news on military spending focuses on the people doing the work, the reality is much of the money is spent on fancy weapons systems, many of them supplied by large companies.

The lesson here is that you can’t spend half of your annual income on defending your home. Doing so wouldn’t leave you with enough money to pay for essentials.

Talking about the essentials, one way in which government does this is to simply shift the burden to state and local governments.  This would be the same as you telling your five-year-old they need to begin saving up for their college education.

Sure, this take pressure off you, but how realistic is it to expect that a five-year-old, or even a teenager will be able to pay for college?  As such, it all comes back to mom and dad.   Either you are fortunate to make enough money to cover the essentials (food, mortgage, clothes, transportation) and save for college or you aren’t.

If you are like most families, then you know all too well that something has to give and this usually means scrimping and saving.

Another advantage the government has over you is that it doesn’t need to pay taxes.  Ok, this goes without saying, but just imagine if you had 30 percent of your hard-earned money back – wouldn’t this make life a ton easier?  While you won’t get to save all that money (someone will need to pay for school and don’t forget tolls for roads) it would put much of your money back in your hands.

For many Americans, this might sound like a fiscal nirvana, but the reality is that there are two things in life you can’t beat – death and taxes – all the rest is up to chance.

So, remember, you can’t just print money to cover your family’s expenses and you probably can’t spend half of your household budget on defense – so no, you can’t spend money like the government.