7 Reasons to Buy a Used Car Over a New Car 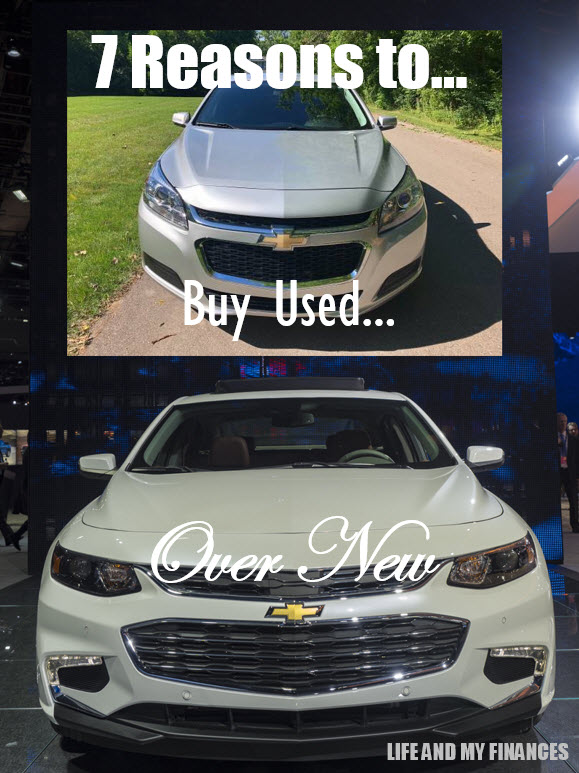 17.2 million new vehicles were sold in 2017, reports USA Today. Whoa. And, at an average price of $36,270 per vehicle, that’s 624 billion dollars that landed in the dealerships’ pockets. Seems like quite a few people are in love with their new cars. Not me. In fact, I can come up with plenty of reasons to buy a used car over a new car — seven to be exact.

7 Reasons to Buy a Used Car Over a New Car

This sounds like another one of those articles, huh? Blah blah blah, you’re dumb if you buy a new vehicle. But I wouldn’t skim over this one if I were you. It’s because of the reasons below that I will never buy a new vehicle for as long as I live…even if I’m a deca-millionaire.

I challenge you to learn the truth about buying used vs. buying used. Chances are that after reading this article, your eyes will be opened and you’ll make the pledge too:

“I, Derek, will never lust after a new car again. The alluring aroma, the glossy exterior, and the crisp steering will never again draw me into financial destruction like the Sirens’ song on sailing passers-by. They simply aren’t worth it. Not now, not ever.”

Don’t believe me? Read on, my friend.

So, simple math tells us that you’re paying $6,000 a year to drive the new car and only $1,000 each year to drive the used car. I think I’d rather pocket the five grand a year, thank you very much. Plus, a $10,000 car is really nothing to sneeze at! That’s a pretty decent car!

2) Pay Cash and Save on Interest

Used cars are cheaper and by saving up a few hundred bucks a month for a couple years, you could afford a pretty nice one that will likely last you many years! Go this route, and you’ll avoid the 5% interest rate (or more…much more for those of you that have poor credit – can anyone say 19%????), which equates to an extra $6,000 over the course of six years. Looks like we just saved another grand a year by buying a used car!

3) Save on Maintenance Costs

You might think I have this backwards. New cars couldn’t possibly cost you more money in maintenance!

Alright, so I have to admit that I have absolutely no support to back me up on this claim. I’m basing this on personal experience only. So, I could be wrong, but let me think out loud for a minute here:

Oh yeah, one more thing! With a used car, you can do your research and avoid the lemon makes and models out there. With a new one, you’ve got absolutely no data on how reliable it is. You might be buying a brand new lemon and not know it until AFTER you spend thousands of dollars! Consumer Reports cannot save you here.

With these top reasons to buy a used car over a new one, we’re already saving you $6,000 a year plus the additional cost of new(ish) car maintenance!

4) Mechanics Actually Know How to Fix It

Drive in with a used car that the mechanics have seen hundreds of times — they’ll know exactly what to do with it. Pull in with a car that they’ve seen three times, it’s going to take them longer and they’re going to be doing more guess-work, which means what?

Buy a new car with a loan and you’ll be required to put full coverage on it (the bank is exceptional at protecting their assets with your money). Buy a used car with cash (and with a few more bucks left in the bank) and you can put minimal coverage on it. Plus, it will naturally cost less to cover a cheaper asset than a more expensive one.

The savings? Roughly $75 a month. That’s almost a grand a year!

You know what happens when you’re used to watching a baseball game from the upper deck and then your boss takes you to a game with seats right behind home plate? It ruins you for life!

You were once content in seat 323G, where fly-balls looked like grounders and the crack of the bat was barely heard over the whistling of the wind… Now you’ve experienced the movement of pitches, the cackling of the players, and the earth-shattering boom of those home run blasts…

…It sure is going to suck going back to section 323…

The same is true for old cars vs. new cars. Once you buy new, it’s tough to buy used again. It’s best to just never start. Your future wallet will thank you.

Have you ever seen a guy pull into Walmart with his brand new Audi R8?

After he’s done shopping, he drives home, gives his wife a head-nod when she approaches, then hides out in his Audi-themed man cave for the night.

Alright…so I’m having a little fun with this one, but seriously – some guys are way over the top when it comes to the love of their cars!! They’re just pieces of metal, people! They’re meant to drive you from point A to point B. You know…if your car is the most important thing in your life, you’re going to be living a pretty sad life with plenty of regrets.

Instead, buy that used car, care about it just a little bit, and love on your wife every day. It’s way more worth-while in present AND future!

7 Reasons to Buy a Used Car – Are You Bought In?

I absolutely love my used cars. They hardly cost me any money, they still look decent, and I really don’t have any emotional attachment to them (crash into me and I’ll ask if you’re okay instead of calling you an idiot for denting my second love).

Buy a used car and pocket over $7,000 a year. Invest only this savings and ignore all your other bad spending habits…and you’ll enjoy $2.6 million in retirement.

So what about you? Have I convinced you yet that buying used is the only way to go?

Say it with me now!