How to Give a Million Dollars (Not Save…Give) 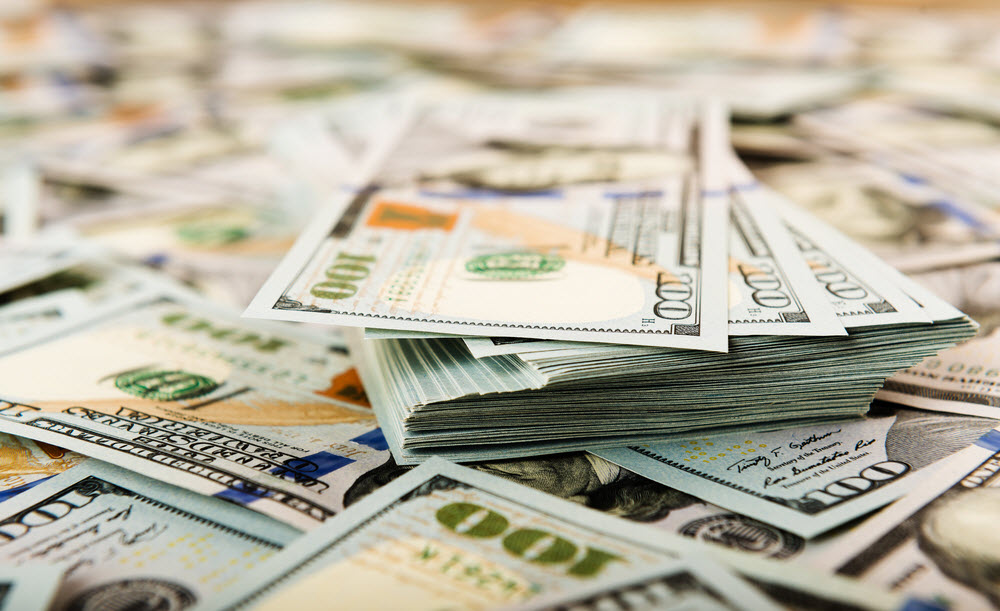 There are literally thousands of articles out there titled, “How to Save a Million Dollars For Retirement”, and that’s great – we should all be millionaires in our retirement if we want to live well in our golden years. In this article though, I’m going to challenge you to think even bigger. What if, instead of just saving a million dollars in your nest egg, you could give a million dollars?

Related: How to Make a Million Dollars in 10 Years

How to Give a Million Dollars (Not Save…Give)

Think of all the good you that can be done when you give a million dollars away!

Through Samaritan’s Purse alone, you could:

Whoa! That’s a TON of good that could be done!

So why doesn’t everyone aspire to give a million dollars away? …Oh right…I guess because it’s kind of a crazy goal. But you know what? It’s certainly not unattainable and it could do so much good for so many people!

But, before we dive into the best methods to save up and give a million dollars away, we’ll first explore how not to do it…which is the way pretty much everyone tries to donate money and do good for the world…unfortunately. After that, I’m going to educate you on five ways that you can actually accumulate and give a million dollars to the charities of your choice. Some are better than others, but they’re certainly all possible! 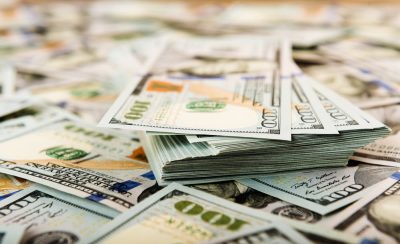 How NOT to Give a Million Dollars

There are mainly two ways that most people (even the most well-intentioned) live their lives in terms of giving:

Those that Fund the Life They Want, Then Give

I’d say the majority of the population lands in this camp. They decide where they’re going to live, what cars they’re going to drive, and then plan out where their kids are going to go to school. After almost all the money is accounted for (and spent), they then consider giving a little bit here and there.

At most, this type of giver finds $100 a month in their budget to help those that are in need.

It’s nothing to sneeze at, but they certainly didn’t give a million dollars away.

Those that Plan, Give, and Then Live a More Modest Life

According to Psychology Today, there are multiple evidences that giving not only improves the lives of the receiver, it improves the satisfaction of the giver as well. The more someone gives, the more satisfied they feel. For this reason (and often due to religious beliefs as well), some individuals first set aside money for giving and then live off the income that remains.

Because this type of person intentionally gives money away each month, it is likely that they’ll likely shell out more than those that give as an afterthought. Let’s assume this individual gives away 10% of their $60,000/year income.

Much better than the haphazard giver, but still not a million bucks.

5 Ways to Give a Million Dollars

Sooo…if even the most intentional giver can’t give a million dollars away over the course of their lifetime, how does anyone have a chance? First of all, there are many other non-conventional ways to give. Second, the givers that consistently send money to charity for many years are actually going about giving all wrong (as you’ll note in points #4 and #5 below)… 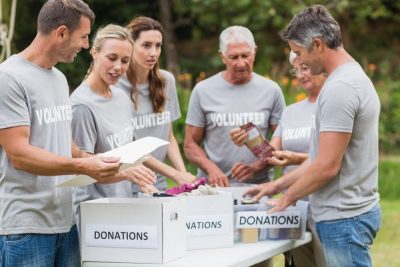 One of the more popular ways to give a million dollars to charity is to use someone else’s money.

Over the course of many years, you’ll likely reach your million.

Yes, it’s sort of like cheating since you’re not giving your own money away, but you’re still making the impact in the lives of all those people that are receiving the gift.

2) Build a Business and Sell It

According to the well-known study of millionaires, “The Millionaire Next Door“, two-thirds of millionaires are actually business owners (and I suspect much of their net worth value is actually in their business…ie. what the business is worth if they sold it).

If you’re self-employed and have a growing business that you’d like to sell someday, perhaps you should plan out a percentage of that sale that you’d like to give away. With the right business growth, your gift could very well exceed a million dollars.

3) Inherit Millions and Give Some Away

It’s typically not up to you to inherit millions of dollars…but you could positively impact your results by being a genuinely nice person and by caring more about others than you do yourself…Just ask Cara Wood from Chagrin Falls, Ohio.

Over 20 years ago now, Cara was a waitress at a local restaurant, working her way through college. It was there that she met Bill Cruxton, a widower with no children that came in each day to subdue his loneliness a bit by eating a quality breakfast among people and chatting it up with a few of the employees. He and Cara developed a friendship – so much so that she started helping him run a few errands and even spruce up his house once in a while.

Little did she know that this would result in an inheritance…

A couple years into the friendship, Bill passed away, leaving the majority of his estate to Cara the waitress…the amount was $500,000.

Okay, okay, so it’s not a million. But if half a million is possible, I’m sure there’s been someone out there that has left a million bucks to an acquaintance!

And, if you suspect that your parents or grandparents will be leaving you millions of dollars upon their death, start to consider what you’ll do with the money. Either give a million dollars away immediately upon receiving the gift, or you could go the route that option #5 suggests!

It might be difficult to stack up your nest egg large enough to give a million dollars away in your lifetime, but it would certainly be doable upon your death. Here’s how you do it:

So depending on your age, how much would you need to save to reach that million bucks by retirement?

If you’re young…take note of the numbers above and start saving early!

The numbers above assume that you’ll invest the money into an S&P 500 Fund and earn an average of 9% a year.

5) Save Aggressively Early in Life, Give a Million Dollars Away in Retirement

If you’re under the age of 25, your odds are pretty good to give a million dollars away while you’re still alive.

Let me show you why.

If you do what I teach, you’ll certainly be out of consumer debt by the time you’re 25 years old, and then you’ll buy a modest house that you’ll be able to pay off in 5 years or less. With little to no debt for your entire adult life, do you think you’d be able to stash $800 a month into your retirement accounts?

By doing so, you will have amassed $4.6 million by the time you reach the age of 68.

In just 5 short years, you will have given away a million dollars and you’ll still have the $4.6M in the bank! 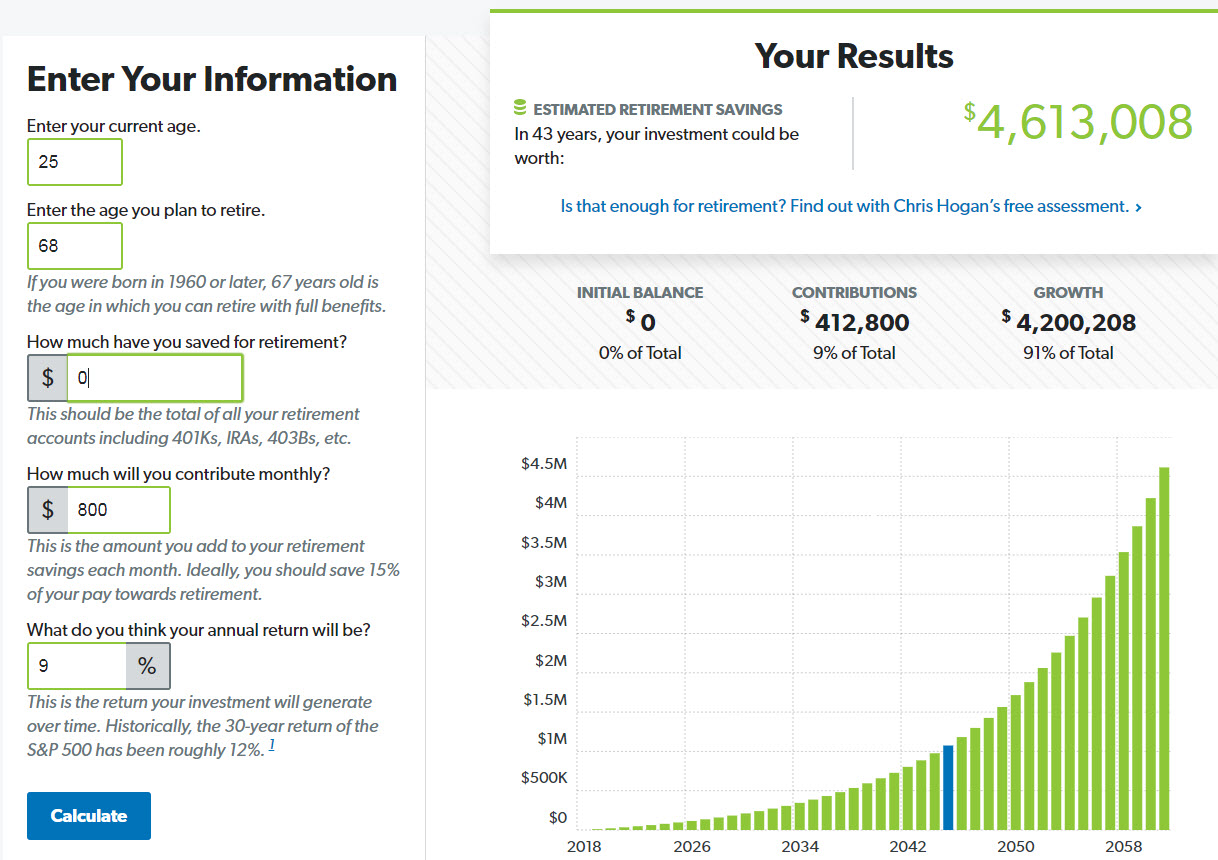 Give a Million Dollars

What do you think? Are you ready to accept the challenge?

Liz and I have approximately 35 years before the standard retirement age. If we choose to work them all, we’ll almost certainly be millionaires in retirement – in fact, we’ll likely have that $4.6 million that we just talked about above. If all happens to plan, we’re going to have a blast blessing others with hundreds of thousands of dollars each year in retirement…

It almost seems surreal like it couldn’t possibly happen, but it absolutely could! You really don’t have to:

If you want to give a million dollars away before you die. All you have to do is invest early and stay consistent. Once you’re in retirement, you will have amassed so much money, giving away a million dollars wouldn’t hurt your financial standing in the least!

So when will you get started? When will you start saving so you can give a million dollars away??