Over Half of My Readers Are Considered Wealthy – Are You One of Them? 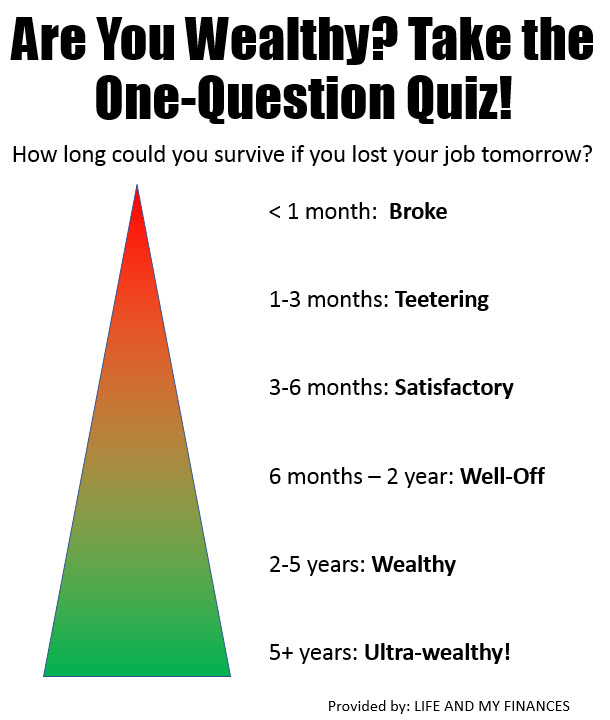 Just over one year ago, I polled my reader base and asked them one question, “If you lost your main source of income tomorrow, how long could you survive without touching your retirement accounts?” Over 1,000 people responded, and guess what? Based on the response, 55% are considered wealthy!

The question I have for you is, “Are you one of them?”

Over Half of My Readers Are Considered Wealthy – Are You One of Them?

You might be thinking, “How is it possible for someone to survive without an income and without dipping into their retirement funds?”

I don’t mean to be harsh, but if you’re asking yourself this question, then I can already tell you that you’re not one of the 55% that are considered wealthy.

But you know what? That’s okay! The important part is that you’re reading this post and learning what it might take to get there. And quite honestly, that’s about 80% of the battle… admitting that you don’t know everything, understanding that your methods aren’t working, and being willing to try something new…something that might actually make you wealthy.

The Magic Question and the Wealthy Answers

Back to our question, “How could someone survive without an income and avoid dipping into their retirement savings?”

So, they can either continue living because they have other money coming in that can cover their expenses, or they have so much stashed away in a non-retirement account that they could chip away at that for many years without it really impacting their future life.

So what does it take to qualify as wealthy? How long would you have to survive?

See the chart below to get a quick read on where you land.

How This Form of Wealth is Possible

Alright, so now it’s making sense how someone could survive for so long, but how in the world did they reach that level of security? I mean, how is it that people earn an additional income outside of their day job?

And how could people possibly have enough cash stashed away to live on for years?

I know it seems odd to have such wealth. In fact, it seems so odd that you may have nodded your head to some of the ridiculous possibilities above! In reality though, the answers are much simpler than you think.

Live on far less than you make

If you want to be considered wealthy, the first key is to start living on far less than you make.

The best place to start is the debt snowball. List out all your debts from smallest to largest and then devise a plan to start paying extra on them each month. Pay the smallest one off first, and then apply that payment to the next largest debt, and then the next largest, etc. etc. until you’re totally out of debt! This will reduce your monthly expenses by far more than you realize.

Next, you’ve got to come to terms with your house. If you owe more than 2x your yearly income, it’s likely too much house for you and the payment is just crippling. In short, it’s stealing your money and is actually keeping you from becoming wealthy!

Related: How Much House Can I Afford?

Finally, if you want to be considered wealthy, you’ve got to learn to live on far less than you make. One of the easiest ways to do this is to simply make more money!

Related: How Much Should You Spend on That??

Isn’t that just CRAZY?? But the cool thing is, it’s absolutely possible.

So once you get here, what do you do with all that money that’s just stacking up in the bank? There are endless options, but there are a few standard go-to’s that have become the central building blocks for the wealthy.

Continue to live on far less than you make

If you want to be considered wealthy, this point has to sink in.

Anyone can live on less for a time, and the majority of people can increase their earnings for a time, but very few people have the ability to earn more, live on less, and keep that pattern going for the long term.

In other words, some people chop their budget for a few months and make some financial headway…but then they likely lose steam and fall off the wagon. Others find a way to earn $200,000 a year, but then they soon figure out a way to bump up their expenses to $199,900… Very few can earn more, live on less, and build wealth. I hope that you’re the exception, because it’s an absolute fantastic place to be.

Get your earnings up, don’t inflate your lifestyle, and watch your financial future blossom.

My Confession – I’m Less Wealthy This Year Than Last Year

Remember how I just told you to fight off inflating your lifestyle?

Well…turns out I’m a finance blogger that’s not perfect.

While Liz and I are on the road to wealth and we’re not too far away from millionaire status, we’re certainly human and we occasionally make some decisions based on emotion and not math (which sometimes you should do!).

About six months ago, Liz and I decided it was time to move to the country. Since then, we sold a rental property, sold our primary house, and bought a lovely two-story home on 6 acres.

After these transactions, our net worth has stayed roughly the same, but we moved roughly $120k from rent-producing property into our primary residence. ie. We now earn less outside of my day-job than we did before.

Instead of being able to last for 5+ years like we could have a year ago, we’re now in a spot where we would last only a year and a half.

Dang, that calculated out way worse than I thought it would. But you know what? It’s okay. We’re loving our new home, I love my job, and we’re building up our reserves back quickly.

In the next 2-3 years, we’ll be considered wealthy again. I’m going to make sure of that!

What about you? Are you considered wealthy and part of the 55%? Or are you still aspiring to get there?