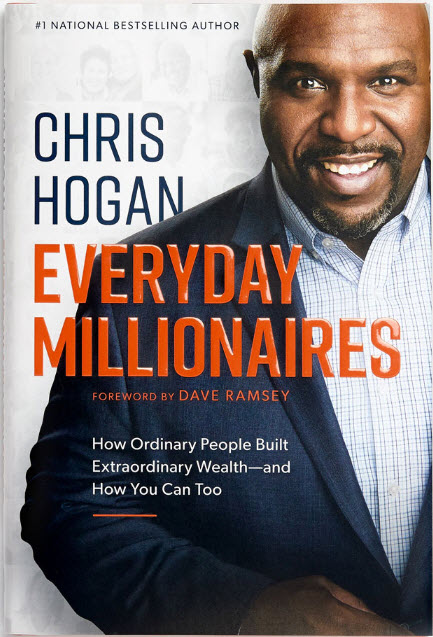 It’s probably no surprise to you all….but I’m a Dave Ramsey junkie. I couldn’t agree more with his baby steps, and I find myself nodding to just about everything he says (except his investment advice – I’m an index fund kind of guy). About a year ago, when he said one of his “Dave Ramsey personalities” (Chris Hogan) was writing a book about everyday millionaires, I couldn’t wait to put in my order, devour its content, and confirm (or disprove) all of my beliefs about millionaires.

This should clue you in on two things:

How the Book Came to Be

Before we dig too deeply into the book and its contents, I think it’s important for us to step back and understand how the book came about, and what kind of work went into it before the words even made it onto the page.

If you consistently listen to Dave Ramsey’s podcasts, you know that they occasionally host a “millionaire theme hour”, where millionaires are prompted to call in so Dave can interview them and see how they developed their wealth (since the popular belief is that rich people either inherit their wealth, win the lottery, or they lie and cheat their way there).

His common questions for millionaires are:

What they discovered pretty quickly was that most of the callers were just ordinary people that didn’t make an excessive amount of money. But, they consistently lived below their means and had been consistently investing for decades. Hence the title…everyday millionaires.

The millionaire theme hour data became so intriguing, the Dave Ramsey team decided that they needed to take this “study of millionaires” one step further. It was time to conduct a nation-wide survey.

Instead of simply reaching out to all the listeners of the Dave Ramsey show (which would make for skewed results of the survey…), the staff figured that they should contact an outside research company to conduct the survey both from listeners, but also from a wide variety of millionaires outside the scope of the show.

From the bits and pieces that I’ve heard on the podcast, over 10,000 millionaires responded to the survey and answered a variety of questions. Roughly half of these respondents were Dave Ramsey listeners, and the other half knew nothing of Dave Ramsey, but still made millions and reported in about how they got to where they are today.

The results basically confirmed my suspicions.

What is it Like? Is It an Enjoyable Read?

First of all, Chris Hogan did an excellent job writing this book. He has a fantastic personal story and it’s always a pleasure to learn from him and his experiences. The first few chapters of this book capture a bit of that story as he discusses…

The middle chapters of Everyday Millionaires are meant to pump you up. They basically tell you to stop making excuses, own up to your mistakes, believe in yourself, and start to blaze a trail of success.

The final chapters basically outline the baby steps (not surprisingly) since that’s the path most millionaires take to build their wealth (sorry, I kind of ruined the cliff-hanger ending here…couldn’t help it!).

All in all, it IS an enjoyable read, but it’s just not packed full of the facts and figures I was expecting. However, after having read the book and analyzing it after the fact, I was surprised how many stats there actually were! There were just so many personal stories mixed into the book, that you didn’t realize how detailed it actually was (which honestly, makes it a much better read for the general population looking for answers).

I liked it, and now that I’ve read it I’ll probably read it a second time without being so critical of every page. I’m sure I’ll get much more out of it the second time around.

What Did I Learn?

I honestly didn’t think I’d be too shocked by any of the stats, but there were a few that caught me off guard…

Basically, everyday millionaires are goal oriented and assess what they do on a regular basis. They want a bright future…with money, health, and their personal life. They’re willing to learn continuously to achieve success in any area they choose.

Makes total sense to me!

Even though the other stats didn’t completely shock me, a few of them still are worth noting:

And you know what? There are probably 20+ other stats that you’d probably like to learn. I just can’t list them all!

Would I Recommend Everyday Millionaires For Your Bookshelf?

You might be intrigued by all the stats above, but is it actually worth you buying this book and adding it to your bookshelf? Even though it took me like, 6 months to read this book, I would highly recommend that you buy it, dog-ear some pages, and underline the heck out of it.

The truth is, we are fed lies from the media all the time. Lies about millionaires, society, the norms of today…and we’re fed this crap so often that we need a resource within arms’ reach that quickly and definitively dispel the myths. I firmly believe that you should buy a copy.

So where can you get your hands on Everyday Millionaires? I’d say you should just head straight to the source – right here at Dave’s online store.

How quickly will you read this book? And will you take action on the newfound reality??