The Debt Trap: Selling Yourself Into Modern Day Slavery 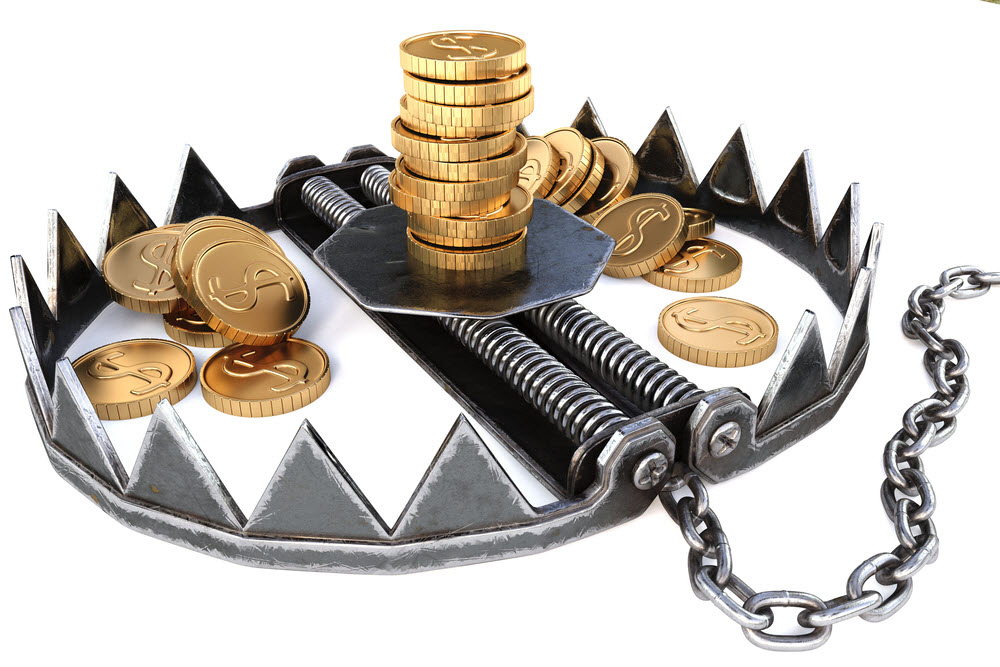 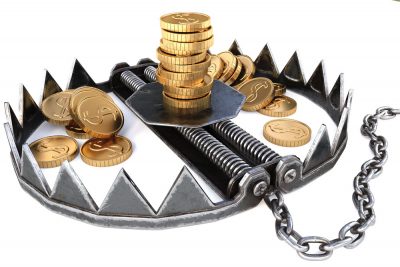 Have you ever heard of the debt trap? This is where people take on little bit of debts at a time in order to get stuff that they want/need today…even though they can’t afford it (ie. can’t pay cash for it). Then, a few years down the road, they’re left with old stuff that they could care less about, but have big debt payments and little cash flow to get out of their financial mess. It often doesn’t happen overnight, but many Americans today are entering the debt trap.

It’s easy to hop your way down into the trap, but you’ve got to claw and dig and crawl your way out. Retrospectively for most…it’s better to never enter the trap. 😉

The Debt Trap: Selling Yourself Into Modern Day Slavery

The problem really is getting out of control. According to a recent article by the Motley Fool…

Isn’t that just staggering?? And you can’t just attribute all these high percentages to mortgages either. After all, baby boomers should really have their houses paid off by now (they’re ages 55-75, so a 30 year mortgage should be paid off in their early 60’s for sure!), and many millennials are still renting apartments and traveling the world while they can! They don’t want to be tied down by mortgages.

As it turns out…

The reasons may differ by age, but the resulting story is the same throughout – all this stuff (vacations, clothing, entertainment, houses, and yes, even education) are sending us into a debt trap, and few of us realize that we’re even headed into the mouth of the beast.

My Friends and Their Constant Debate

I was on the phone with them just yesterday. My buddy was excited because they just bought pretty nice used car – for $10,000. They’re pretty frugal most of the time, so the purchase shocked me a bit. Long story short, they were sick of their older cars and just wanted something that looked nice and that they could be proud to drive.

Okay, kind of a lame reason… Sounds to me like they got car fever and just splurged on one of the first shiny objects they saw…but whatever, I digress…

Anyway, he was most excited about the deal they got on the interest rate and payment terms.

With this financial method, it turns out that his car payment is only $48 a month, which he thought was pretty sweet.

But you know what? Even on just day 2 of the line of credit, it’s already starting…the debt trap.

It actually happened while I was on the phone with him… In the background, his wife piped up,

“You see [hubby]? Isn’t it just nice to have this line of credit? Now it’s there in case we have an emergency. Plus, we’ve always wanted to redo the kitchen. We finally have that chance!”

*a sharp message from the loudspeaker, “WARNING! WARNING!”*

…my eyes definitely bugged out of my head a little (it’s a good thing I was on the phone and not there in person)!

Their debt trap has officially begun. His wife was feeling comfort in the fact that they finally had money at their disposal…

But this is what I was hearing:

…Of course, she wasn’t saying this, and she probably wasn’t thinking it either, but these are the exact things that happen as a result of opening up a line of credit.

But, this is exactly how the debt trap starts…and it often doesn’t end well. 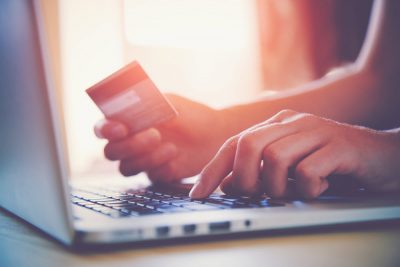 The Debt Trap – Playing Out This Scenario

So…they’ll probably tack one more purchase into this line of credit. Let’s pretend it’s another car – this time for $20,000, which adds another $100 a month to their debt payments.

Suddenly, they’ve got $350 a month in extra payments that they didn’t have before, AND they were already living paycheck to paycheck before this “magical” line of credit. Now, with all the payments, they are literally going backwards financially.

So what can they do?

Buuuuut, houses have appreciated in value since they bought theirs 8 years ago, so in order to find a house that results in lower payments than the one they’re in now, it will literally need to be half the size.

…the debt trap claims yet another victim. Either it eats you up, or it chomps off your leg and forces you to try to regrow another one. (Is that a terrible analogy? Yeah…yeah, it is. (*shoulder shrug*))

What I Would Have Done to Avoid the Debt Trap

When you’re living paycheck to paycheck and can’t seem to get ahead financially, the absolute easiest solution (which often means the worst solution by the way) is to get a line of credit to float you through.

Inevitably, the added debt will harm you in the long run and put you into an even worse spot than where you were before.

On the wall in our living room, we have a framed quote that reads,

“Do not follow where the path may lead. Go instead where there is no path and leave a trail.”

Instead of following the easy road, what could have been done to avoid this debt trap? What could you have done that pretty much no one does, but that would put you in a much better position in the long-run?

First off, you’ve got to stop thinking only in the moment. You know the phrase, “YOLO” (you only live once)? Sure, it’s a good idea to take some chances in life and actually live while you’re alive, but too many people use this mentality as an excuse to be irresponsible.

Stop letting the breeze of life blow you around. It’s time to set some goals and actually drive yourself toward something.

We all need goals. It gives us purpose, it makes us feel alive, and you know what? It also makes us interesting (because so few people do it).

2) For every decision, ask yourself if it helps or hurts the end goal

Now that you have a few goals (and P.S. …if you’re in a relationship, make sure that you and your partner are on the same page), decisions start to become more clear.

“Let’s see, I want to pay for at least half of my kid’s college education, which costs me $400 a month….but I really want this $400 TV that I’m staring at right now… Well, I guess this TV will just have to wait. My kiddo is too important!”

Without that goal, you could have easily talked yourself into that TV. After all, your TV is 8 years old, the sound is wonky, and you work so hard that you really deserve to relax in front of a decent TV…. (blah blah blah). But nope! You’ve got a goal to give your child a better life than you’ve got today. And they’re going to love that education so much more than a dumb old TV.

Alright, even if you have goals and therefore reasons to say ‘no’ to stuff, you still won’t succeed if you’re constantly living paycheck to paycheck. You’ve got to find your way off that rat’s wheel.

Based on one of my top articles, “40+ Side Hustles That Anyone Can Do“, there are so many options that could boost your income, and it doesn’t even have to be a dramatic shift in your life.

Also, you could check out my post, “35+ High Paying Jobs Without a Degree” and get yourself into a better career, thereby providing you more money each month, and getting you out of that paycheck to paycheck cycle.

And finally, yet another great way to improve your finances is to spend less money! Back in the day, I turned myself into an expert. In fact, I cut my budget in half. Here’s how.

If you want to get out of (or avoid) the debt trap, you’ve got to start being honest with yourself about what truly is a want vs. a need.

Pretty much everything else is a want.

And then our other wants are just ridiculous.

If you could die because you don’t have it (be honest with yourself here), then it’s a need. If it’s anything else, it’s just a want.

5) Ask yourself, “How could we pay cash for this?”

Ever hear of the “law of attraction” or the “law of income“? Basically, if you set your mind to something, it’s amazing the ideas that can pop into your head and the opportunities that can arise that never seemed to be there before.

When you depend on debt and always have that as your ‘go-to’ solution, your mind will never find a different way to reach the same goal.

BUT, if you commit to come up with a way to do what you want with cash (which may seem impossible at the time), your mind will likely not only come up with one option, but many!

Want a new kitchen? Perhaps you could…

You know what? The possibilities are endless! All you’ve got to do is get your mind thinking. If you commit to debt, you undoubtedly spend more.

The Debt Trap – It’s a Nasty Thing. Avoid It At All Costs.

Thousand of years ago, people got into financial trouble where they simply couldn’t pay off their debts. Back then, they had what seems like a radical option today. They could walk over to the rich man that loaned them the money, tell him they couldn’t possibly repay him, and agree to pay back their debts with years of service – as a farmhand, a butler, or a general laborer. It obviously wasn’t ideal, but it was pretty much the only option they were left with.

Today, 80% of us offer ourselves to modern day slavery. No, we don’t need to literally put ourselves to work on our master’s property, but every time we buy something on payments, we tell that manufacturer/builder/business owner that we’ll give them a portion of our future earnings – that’s money that we don’t even have yet! We’re selling our tomorrows for the trinkets and shiny objects of today. It’s causing us to save less, to invest less, and we then need to work later in life because of it.

Consumerism is quite literally a voluntary slavery program, but unfortunately very few of us realize it until it’s too late.

So what about you? Are you ready to get out of your debt trap? It’s time to commit to a better tomorrow!!