Investing Based on Trump Tweets? Or Index Funds? Which is Better? 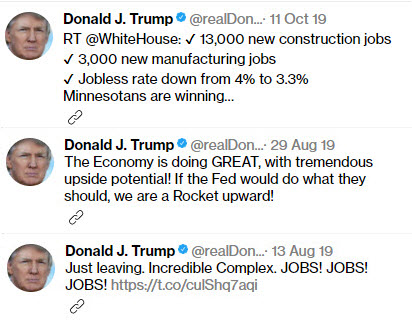 It’s been going on for years now, but…slow as I am, I’m just now starting to catch on. It seems that when President Trump tweets about trade talks, businesses, or about the economy in general, the stock market reacts – up or down depending on the message of the tweet. First of all, why might this be? Does Trump’s twitter handle really carry that much power? Secondly, is it actually true? Could someone become rich by trading based solely on President Trump tweets? And finally, what should you do about it?

All interesting questions. And we’re going to dive into every one of them. 🙂

Investing Based on Trump Tweets? Or Index Funds? Which is Better?

Check out the Trump tweets below and the stock market’s reaction to them:

…the Dow responds yet again…320 points.

The stock market seems to move as a whole when President Trump tweets what’s on his mind. You’d think it would move even more so when he tweets about business – After all, it’s a much smaller market that can be more easily impacted – especially by a guy that has over 65 million followers!

What Businesses Were Tweeted About? And How Did the Stock Respond?

The Toyota stock didn’t dive massively, but it was still down 0.6% that day.

Does the stock always take a dive with President Trump’s negative tweets (or shoot up during the rare positive ones)?

The answer: of course not.

Trump might say something completely negative about a particular company (like when his daughter was treated unfairly at Nordstrom), but the overall stock market was up and the economy was strong, so naturally, the specific stock that Trump is bad-mouthing still goes up that day.

BUT, in order to win with trading on Trump’s tweets, you just need to be right more often than you’re wrong. In other words, if you invest correctly 51% of the time, you’ll eventually come out on top. But what if the odds were even better? What if they were 60/40? Or 70/30?

How much money is there really to be made here??

Get Rich By Trading on Trump Tweets?

Like I said earlier, I’m a little slow to this party. Planet Money thought about this back in 2017. In fact, they actually paid a computer programmer to build a bot that would automatically:

But, the real question is…”Did it work?”

Unfortunately, the original bot (called BOTUS – “Bot of the United States”) had a few glitches. There were quite a few instances when it should have traded a stock, but didn’t. Over the course of 7 months, the bot actually only made 2 trades and lost 0.2% of the $1,000 investment. Soooo…not too great.

BUT, what if the bot performed as it was supposed to and made all the trades perfectly? How much money would have been made from the start date (January 1, 2018) to the end date (October 9, 2019)?

Did the Overall Stock Market Perform Better During the Same Stretch?

In the past, I’ve heard far too often the gloating from those that have “chosen the stock of all stocks” and their returns are just soaring! When I stop and humor them for a moment, I discover that they had earned 15% on their money that year. Not too shabby…but that was also the year that the overall stock market earned 20%!!

Suddenly, their fairy-tale stock wasn’t all that impressive.

But what about this case? What about investing based on Trump tweets? Is it better to load up all your money with BOTUS and let him do his thing (you know…assuming he would actually operate exactly as he should)? Or (as I have preached many times) should you just put your money into a market index and let it ride with the overall market?

Okay, so it went up. What was the annual yield vs. the 7% that was achieved by the bot?

You’re not going to believe this…

The overall stock market only grew at a 5.0% annual rate. The bot won…

What Does This Mean For You?

I started writing this article on the premise that Index funds are almost always the best way to go. My assumption was that the overall stock market surely would have beat the BOTUS bot. In fact, I was so confident that I didn’t even compare the two until basically just now.

However, these results are reminding me of a documentary I’d seen a few years ago. The name of the documentary as well as the featured fund managers are escaping me at the moment (I apologize…perhaps I’m still in shock at the above results), but the story went something like this:

They started out so well! What happened??!

In other words, they used logic and patterns to predict the rise and fall of future share prices. And heck, it worked GREAT for those first few years!

But then…the scare of the Cold War started.

People no longer traded based on logic and future foresight. They pulled money out of the market at the slightest sneeze that something was going wrong – that perhaps their money wasn’t safe.

And suddenly, the algorithms broke down.

History used to be a great indicator of future results, but not anymore…not when emotions started running the show.

So What Does This Mean For You?

The hot-shot fund managers of the 1980’s were foiled by emotion. Day traders today are often beat out by bots and high-frequency trades. And you know what? Bots based on Trump tweets will soon fade into the darkness as well.

These are all flash-in-the-pan techniques…

Sure, they might work for a couple of years, but they’ll soon just leave you scrambling for the next method/trick/stock tip… And, whether you realize it or not, all that scrambling comes at a cost (the cost of trading, setting up bots, management, and most importantly, the cost of time!).

I’ve done the research, I’ve watched the market, I’ve experienced time slipping right through my finger-tips. It’s just not worth it…

BOTUS? No Thanks. I’ll Stick With the Index Funds.

Even thought BOTUS technically won this battle, I’m convinced that it won’t win the war.

President Trump will eventually not be President. Like all of us, he will get older, have less of an impact on the world, and probably sooner rather than later….get forgotten about. There’s no use setting up a bot to trade on his off-the-cuff opinions.

Instead, here’s what I’m going to do:

How about you? Would you invest based on Trump tweets? Did this above article spark an idea for you to make millions and act on something that’s totally against what I’m recommending?? Or, would you rather invest passively and potentially earn even more money in the long run?