The Power of Belief – My Accidental Discovery 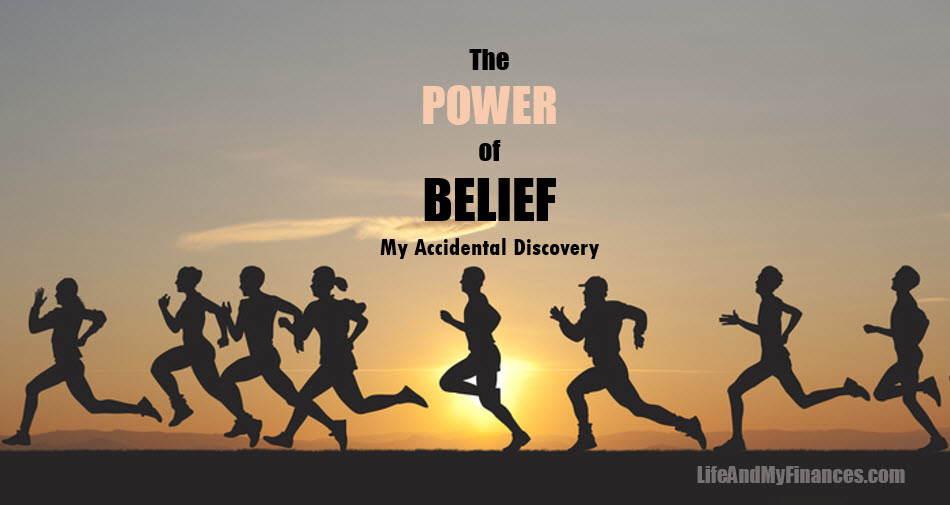 A little over a month ago, I decided to run 2 miles as fast as I could. I stretched, I busted it out, and then…I was dumbfounded. It was fast. Like, really fast. So fast that I figured it was a computer glitch. But, part of me held onto the belief that it was true, so I’ve been trying to match it ever since. Because of this glitch (and it was a glitch by the way), I BELIEVED that I could start running the fastest times of my life at age 35. And you know what? I have. I’ve accidentally discovered the power of belief.

“Time, 5 minutes; Distance, 0.83 miles; Average Pace, 5 minutes 58 seconds per mile”…proclaimed my robotic running app. My eyes stared blankly forward as I somehow still continued to run (instead of falling over in disbelief).

I knew I started out fast, but I had no clue I was THAT fast! My usual fast pace was 7 minute 40 second miles. This was going to be a new 2 mile record for me!

I pressed forward (and maybe even picked up my pace a little) and reached the 2 mile mark in 13 minutes, 5 seconds. A personal record of mine by like…2 solid minutes! 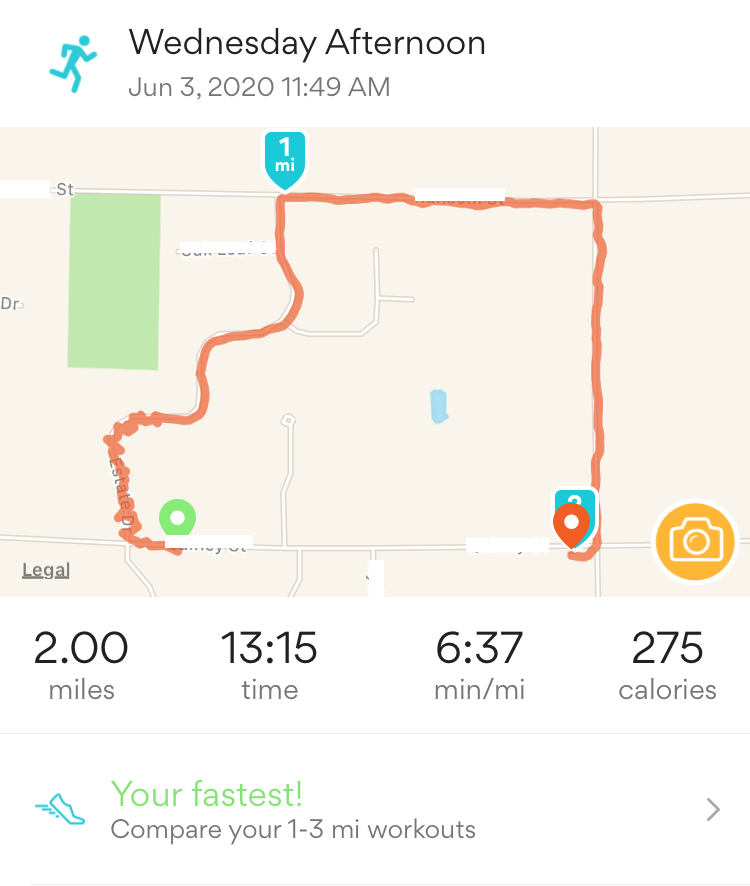 This can’t be right…I said to myself.

There must have been a glitch.

And while I knew there had to be an issue with the GPS tracker (P.S. see “Exhibit A” above…the squiggly line in the first half-mile. I definitely DON’T run like that! LOL!!), my mind knew that I probably could run faster than I had been in the past. After all, the second mile of this run was at a 7 minute, 10 second pace! Where did THAT come from??!

It was time to pick it up a notch. My belief was growing.

My Runs Now Compared to the Pre-Glitch Run

Remember the pace of my previous “fast” runs? 7 minutes, 40 seconds per mile. 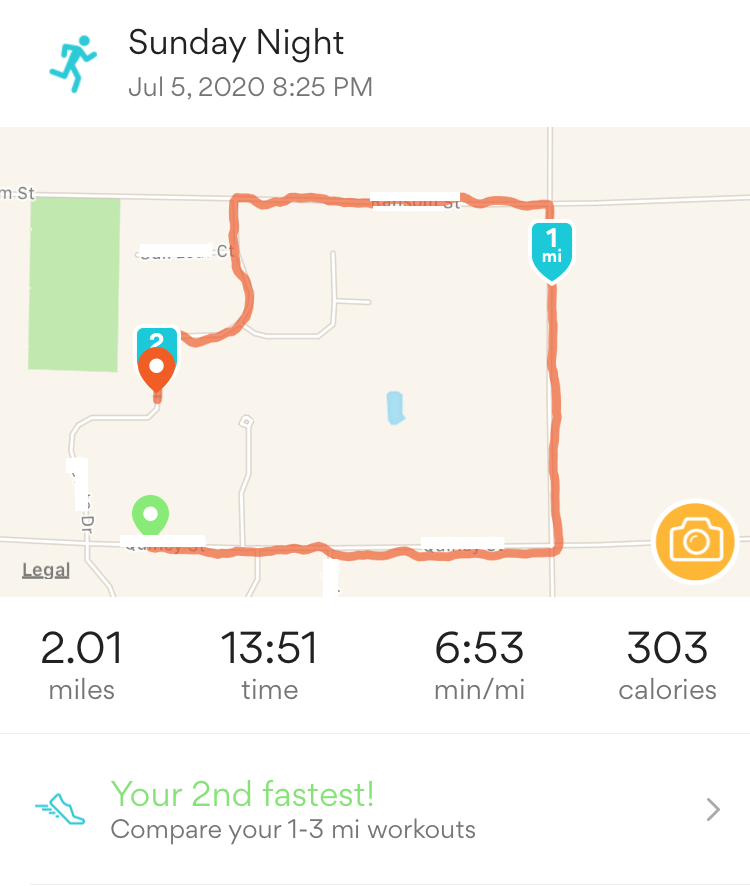 How is this possible?

Believe that you can achieve something and watch out. Your mind will find a way to make it happen.

Somehow, I forgot this principle with my running.

But all that changed when my belief changed.

The power of belief is a crazy thing. I obviously just witnessed this with my physical potential, but I’ve seen it at work in my finances as well.

Related: 13 Fascinating Facts About Your Brain 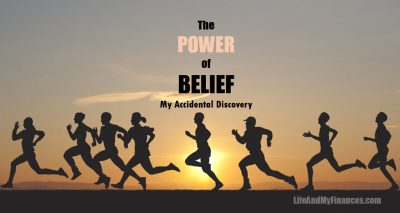 The Power of Belief in Paying Off Debt

When I was 27 years old, my then-wife of 2.5 years called it quits on me. There was no changing her mind, and she wanted half of our assets…most of which was in our home equity. I kept the house and needed to figure out how to get her $21,000 in six months.

Long story short, I did it.

What else could I do?

Well, I had a mortgage left on the house. There was $54k left to go.

And, I had the power of belief.

It was go-time on that debt. I made a goal for myself to pay off the entire loan in 12 months.

There was never a doubt in my mind. It wasn’t if I was going to make it. The only question I continually asked myself was “how?”. And I answered that bit by bit along the way.

11 months and 11 days in, I was mortgage free. I made it, just like I believed I would.

The Math Made No Sense

You know how all those math nerds always say you should invest your money instead of paying down your home loan? They say it’s because you can earn 8% in the stock market vs. just 4% on your home loan.

With the power of belief and the emotions that propelled me to that debt-free goal, I came up with $54k far faster than I would have it I were casually investing. If I would have ignored my debts and invested instead, I probably would have only put $10,000 into the stock market.

Over the years, I’ve written all about how I paid off that mortgage debt. But to this day, I still really don’t know how I did it. Put simply, it was the power of the mind…but I have little else to pontificate. It largely remains a mystery. I got there simply because I believed it was possible. And somehow, some way, my mind got me there.

Related: How to Master Your Mind and Create the Life That You Want

The Power of Belief in Every Area of Life!

The power of belief doesn’t just work with running and paying off debt. It can be applied to every area of your life!

If you believe your marriage can be awesome, it will become awesome.

If you believe you can become a director at work, your mind will find a way to make it happen.

The examples could really go on and on.

The point is, your mind can take you to places that people haven’t even dreamed of yet. But you know what? You have. And you believe it’s possible to get there…and so you will.

The Power of Belief – Are You on Board?

For me, I’ve seen the power of belief in my life on multiple occasions. It’s not voodoo magic. It’s the reality of our God-given gift – our brain, our minds.

So what is it for you? Are you going to start believing in yourself?

What is it that’s going to change? What is it that you’re going to dramatically improve? We can all get better, we just need to believe that we’ll be better.

Are you ready? Are you on board? I want to see your comments below! In what area are you going to believe in yourself??