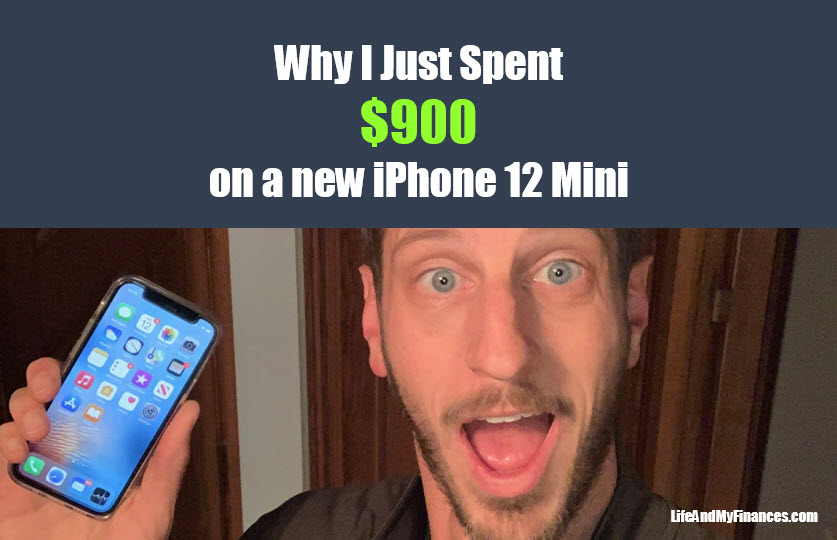 I’m frugal…but I just spent over $900 on a cell phone… “WHAT? Derek, how could you??” I know, I know. It was a lot of money, but I had my reasons, and quite honestly, I’m loving it. So what about you? Should you buy an iPhone 12 mini? Well…that depends on a lot of things. My reasoning is below. If you can relate, then maybe you should pick one up too!

Yup, I Ditched My Old iPhone and Bought a New One…But Why?

I was still rocking the iPhone 6s, which I purchased 117 years ago. Well, that’s how old it was in cell phone years. Actually, it lasted me a solid 5…human years.

I would have kept it forever if I could…but with advancing technology these days, it just wasn’t possible.

At the end of November, I bit the bullet and made the upgrade to the iPhone 12 mini.

Here’s my full line of logic. Like it or not, it’s how I was able to convince myself that this was the best move for me. 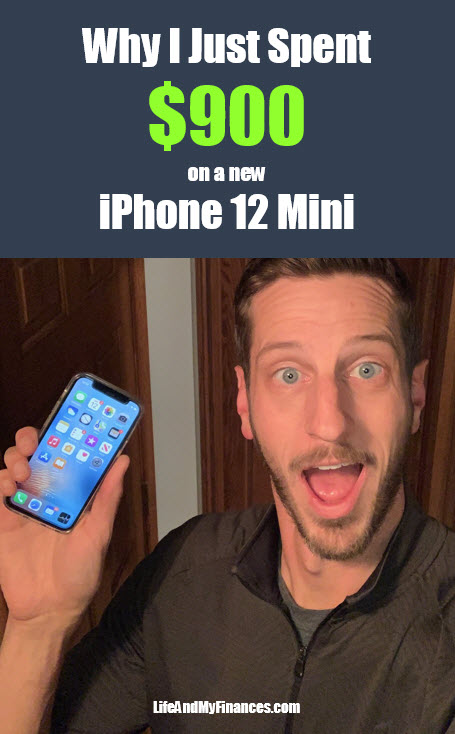 1) Not Enough Memory in my iPhone 6s

When I got my phone, it was one step down from the brand new one at the time. And, it was the lowest amount of memory you could get too.

In other words, I cheaped out and didn’t make a full upgrade at that time. As it turns out, 16 GB isn’t enough memory these days…

As it turns out, a 5 year old battery isn’t so great.

The examples could go on and on, but the point is, the battery sucked and I needed a new phone.

Okay, so this one ties to the point I made in #1 (the phone memory), but there were SO MANY TIMES where I wanted to capture a memory of my kids and I got that stupid message telling me I didn’t have enough memory to take a single solitary picture.

So many memories missed… NO MORE!

4) My Wife Was Begging Me to Get a New One

I’m super frugal, and I can endure pain and suffering with the best of them. My phone had been acting up for probably two years…which was long enough to drive my wife nearly insane. Lol.

The memory issue, the email issue, the battery issue – she knew about them all.

And, quite honestly, it got to the point where she was more upset about me NOT buying a phone than she would have been about me spending nearly a thousand bucks to replace it!

So, I knew I wouldn’t get any flack from her for buying a new one. In fact, buying a new phone would probably cause her to love me more. Or you know…be annoyed with me less. Same thing in my book. 😉

Have you noticed how all my articles have been super crappy lately? (Lol, I hope not, because I still work hard at producing amazing content!!) Well, if I HAVE been slipping a little, it’s because I haven’t been able to stream the Dave Ramsey podcast for the past couple years. My old operating system just wouldn’t support it.

So, I haven’t been able to listen to the issues of the general population that spark many of the amazing articles you’re used to seeing on this page!

Why The Brand New iPhone?

I could have bought a slightly used phone through reputable sites like SellCell, but I decided on buying a brand new one.

1) Used Won’t Give Me As Much Life

Let’s say I bought a used iPhone XR. The maximum memory is 128 GB.

It sounds like a ton to me now, but what about 5 years from now? I’m going to run into the same issue I did with my 16 GB iPhone 6s.

To give myself the best chance at keeping this phone for the long term, I knew I needed to get the maximum amount of memory.

Also, getting an old phone means getting older technology…which likely means it won’t last as long. It’s like buying a 10 year old car with 100,000 miles vs. a brand new one. Chances are the new one is going to last far longer.

2) The Used Ones Weren’t That Much Cheaper

Unlike the prices on used vehicles vs. new ones, the used smartphone prices weren’t that much cheaper than the new ones. I could buy a new iPhone for $900. A comparable used one was like, $830.

Related: BillCutterz Absolutely Shocked Me and Saved Me Money on My Cell Phone Bill

To be honest, I would have considered the iPhone XR or 11 since they were cheaper, but I hated how big they were. Can anyone even fit those phones in their pockets? I doubt it. How annoying!!

If I want a tablet, I’ll buy a tablet. I don’t need one for a phone.

4) A Write-Off For My Business

The expense of a new phone was pretty steep, but you know what? I use it for my day job and I use it all the time to promote this website (ie. my business). So, that means I can write off a portion of it and save myself from paying a bit of taxes this upcoming April.

So, that makes the spend feel a little more palatable.

5) We Could Afford It

Liz and I are both frugal to the core (it’s what made her so appealing for my 2nd marriage. The first marriage…I wasn’t so wise, but that’s a story for another day). We have tens of thousands of dollars in savings and we spend less than 50% of our earnings each month.

While the idea of spending $900 on a phone made me gulp a bit, it was honestly just a tiny blip in our bank account. It had no impact on our lives whatsoever.

Related: Why It’s Ludicrous to Make Payments on a Cell Phone (…and How You Can Avoid It)

Specifically, Why the iPhone 12 Mini?

The only other two qualifications I had were:

There were many complaints stating that the SE would drop calls, and that the battery didn’t last nearly as long as advertised. While the iPhone 12 mini was far newer and therefore had fewer reviews, they seemed to come in much more positive.

2) The iPhone 12 Mini Memory Was Awesome

I’m hoping this phone will last me 6+ years! Pipe dream? Maybe, but I’m going for it!

Should You Buy an iPhone 12 Mini?

What about you? Should you buy an iPhone 12 Mini? This is truly only a question you can answer for yourself, but here’s what I’ve discovered.

So here’s the only consideration I’d have you make… The cost is pretty steep. $900 is nothing to sneeze at.

If you’re not debt free with a bunch of savings in the bank, it’s just not worth it. A new smart phone is a convenience, not a necessity. If you’re still digging your way out of debt, then buy something WAAYYYY cheaper. You can buy something for a few hundred bucks that will do everything my iPhone 12 Mini will do, but it just might not last quite as long.

But you know what?

Get by with what you can for now, then when you’re completely out of debt in 2 years, buy whatever you want. It will be way more fun that way.

Should you buy an iPhone 12 Mini? Is it your preference? Tell us in the comments below!