What Debt Should You Pay Off First? (Highest Interest? Credit Cards?) 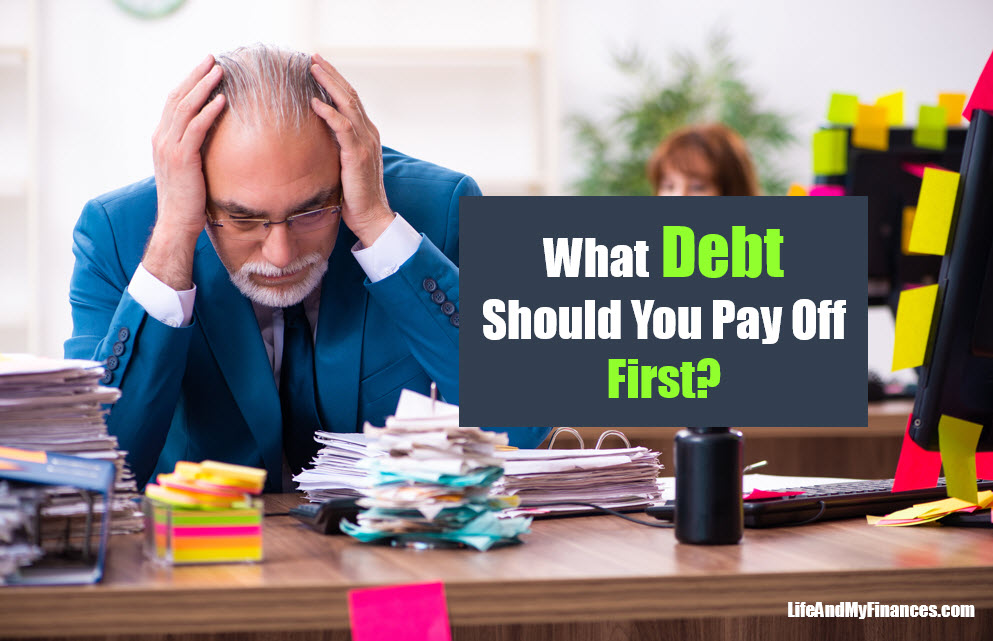 You’ve got credit card debt, car debt, medical debt. Heck, you even owe your mom and dad! What debt should you pay off first? And why? This post will help you navigate all of that and more. It’s time to start killing your debt and never look back!!

The Different Types of Debt

Consumer debt is pretty much anything that’s not your primary mortgage:

And mortgage debt is obviously what’s left on your home loan.

Between the two categories of debt, the most accepted form is your mortgage debt (often referred to as “good debt”) – mainly because the value of your home is likely going up, while every consumer item you borrowed money for is going down in value (your car, appliances, furniture, etc.). Either that, or there’s no physical asset that can possibly appreciate (credit card debt, medical debt, student loans, payday loans, etc.) 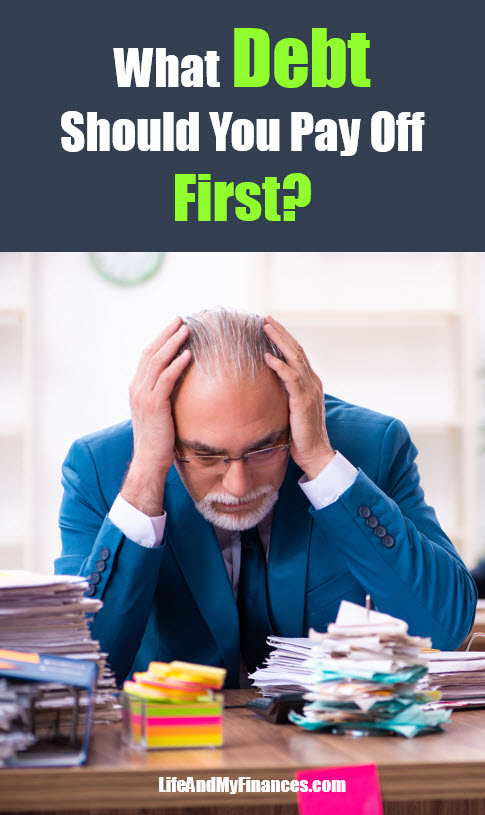 So….what debt should you pay off first?

Well, obviously not your house. That’s probably a huge amount and at a very low interest. Plus, like we said, it’s going up in value. So, let’s not tackle that one until everything else is paid for.

Now we need to look at the consumer debts. Those are the ones we should hit first, but is there a certain one that’s worse than the others?

I mostly agree…but not completely.

If you have payday loan debt, I’d tackle those first since the interest rate is probably 200% or something ridiculous. As for the other forms of debt, I’m fairly indifferent. I’d rather you just start with the smallest debt and get some momentum going! (We’ll cover this method more later).

Some of you may have debt in collections – meaning, you had a debt that was sold to a collections company (for far less than your debt amount, FYI). They’re hoping to hound you and make your life a living hell so you pay your bill in full and they make a ton of money in the process.

They’re annoying, a little scary, and they can be upsetting at times, but paying that bill probably isn’t going to make your credit any better (it’s gotten worse already since you missed your payments and the debt was sold to them). So, if I were you, I wouldn’t be in a huge rush to pay these people unless you can settle for an amount that’s far less than you initially owed – something like 50% or less.

So, let’s say you owed $4,000. If they’d strike a deal with you at $2,000, then it’s probably worth paying and getting them off your back. Plus, you technically owed the money anyway, so it’s the right thing to do to get the debt taken care of (rather than ignore it forever).

A couple things to note:

What About Government Debt?

What if you owe money to the government (for many, this means unpaid taxes)?

I’d recommend that you move this amount to the front of the list. Get it paid as fast as you can. The government has unlimited power (they can even take money out of your bank accounts if they want to!) and they’re not afraid to use it.

It’s best to get them paid, get the struggle out of your life, and then start with your smallest debt after that. 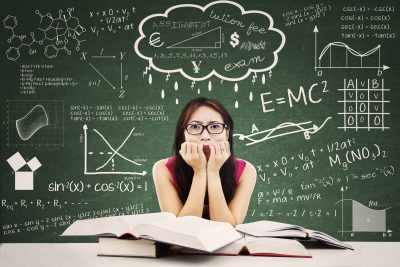 This is actually a tough one. There are quite a few programs out there that promise to forgive your student loans.

Sooooo, should you even work to pay these off? Or should you just make the minimum payments and put all these student loan debts way at the end of the debt snowball?

I like the idea of free money, but there’s quite a bit of red tape here:

So, waiting 10 years to probably get nothing… I don’t think so. I’d just pay off the debt.

Buuut, if you have like $100,000 in debt and don’t like the idea of paying off all that money if it could perhaps be forgiven…then I might just stash cash away like I was paying it off and see if the whole forgiveness plan pans out. If it doesn’t, then you could just move the dollars from savings into the student loan account. Boom.

As for the Biden student loan debt “cancellation” program, I’d probably pay down my debt to $10k, and then maybe move that to the back of the snowball. You know…just in case. If, after his 4 year term nothing happens, just pay the remaining balance. 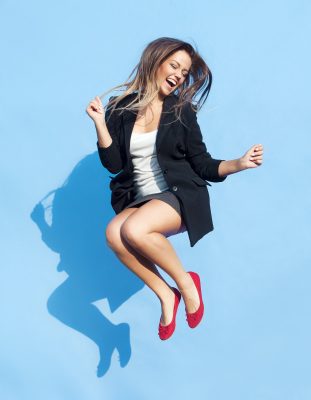 Paying Off Debts From Smallest to Largest – The Proven Method

The Harvard Business Review ran a great piece back in 2016, and it’s still incredibly relevant today.

Through their research, they deduced that roughly half of Americans were unable to pay off their credit card debt in full each month. On average, these individuals were $15,000 in debt and it spanned across four different cards.

Everyone wants to get rid of their credit card debt. First off, it’s a little embarrassing to carry a balance, and second, the interest charges are a killer!

The main question then is, “What is the best way to get out of debt?”

The answer came from a data set of HelloWallet, a financial guidance company that services many Fortune 250 companies and their employees. In the data set, multiple tests were performed on over 6,000 individuals.

The initial test instructed people to pay down their debts:

The results of this first test?

Those that focused on one debt at a time were more likely to pay off all the debt and to do it more quickly.

As you may have guessed, those that started with the smallest debt were the most effective in paying off their overall load.

Based on this testing, what debt should you pay off first?

Well, the smallest one of course! Tackle it with a vengeance, kill it, and then move onto the next biggest one and do it all over again. Keep it going until all the debt is gone!

Based on my experience, you’ll pay off your debt faster and you’ll be more likely to finish vs. any other method out there! It’s how I got completely out of debt and it’s how Harvard tells us to do it! Any other questions?! 🙂

The Debt Snowball – How It Works

The method of paying off your debts from smallest to largest is often referred to as the debt snowball.

The unique name is because paying off the debt is akin to rolling a snowball down a hill.

The financial debt snowball is similar.

Ahh the debt snowball. I freakin’ love it. 🙂

A Free Debt Snowball Payoff Tool, Just For You!

I have introduced this tool in other posts, but I want to make sure you don’t miss it… Download the Free Debt Snowball Tool Here.

Based on all the above, we know the debt snowball is the best method for paying off your debts, but this tool takes one more giant step toward effectively paying off ALL OF YOUR DEBTS.

This tool allows you to see how quickly you could pay off your debts if you:

I have personally seen people plug all of their numbers into this tool and see that it would take them 10+ years to pay off their debts if they just kept making the minimum payments. But, by committing to roll up their sleeves and add $1,000 a month to their payments, their payoff projections came all the way down to 2 years!

Then, they paid them all off even faster than that!

It’s amazing what this tool can do for your motivation. It shows you that you can ABSOLUTELY pay off your debts! And, you can do it faster than you ever thought possible!

Want to learn more about how to navigate the tool? Here’s the original post: Free Debt Snowball Calculator: How Soon Could You Be Debt Free?

What Debt Should You Pay Off First? In Summary…

So what’s the order again? What debt should you pay off first?

Here’s the order as I see it:

But of course, everyone’s situation is different and unique! This is just a guideline for the typical debt scenarios. If you believe that your order differs, then by all means, follow your logic!

Where are you in your debt payments? What debt should you pay off first?