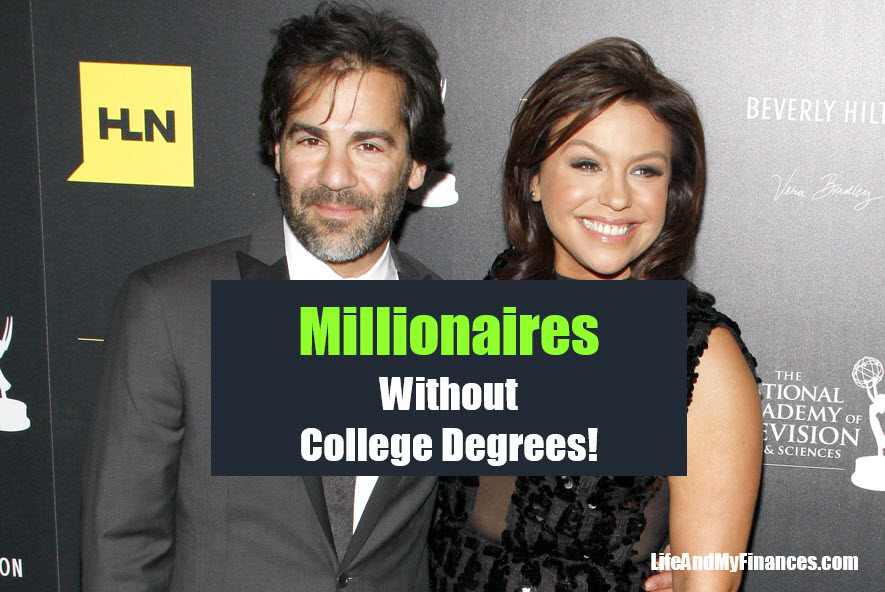 While college is necessary for some professions, and helpful for others, it’s not always the best choice for everyone. And the long-standing myth of “college degrees make you richer and more desirable in the field” is wrong as well. In fact, there are quite a few millionaires without college degrees, and many also worked their way up the ladder.

The people on this list are all self-made, didn’t go to college, and have still been able to make millions. If anyone can show it’s possible to make money without a degree, it’s these people.

Many women (and men!) have owned a pair of Steve Madden shoes. Maybe that’s how the multi-millionaire was able to amass a $300 million net worth. But funny story about Steve Madden… he started his business with the $1,000 he had in his bank account. $1,100 to be exact.

After his father cut him off, he could no longer afford to go to college. So he dropped out, used the money he had saved up, and started the now immensely popular shoe brand we know and love today. Not too bad for a party boy, huh?

Almost everyone knows Bill Gates, but he’s worth mentioning on this list. Not only is he a millionaire, but he’s actually a billionaire. While there is some controversy surrounding his wealth (and himself), you have to give it to him… he knows how to make a buck.

Bill Gates was actually a Harvard student before dropping out. He’s admitted to spending more time on his computer than paying attention in class. Did you know that he was in school to become a lawyer, and when he dropped out, his parent’s were disappointed in him? I wonder how they felt when he became a millionaire doing something he loved! 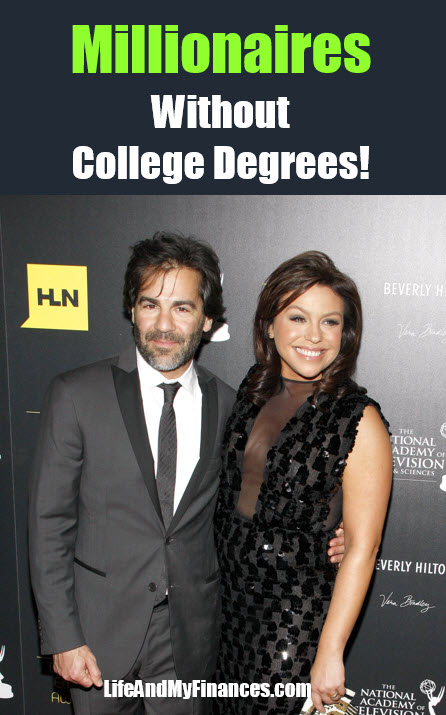 I don’t know about you, but I watched Rachael Ray for years when she first started on Food Network. Her hit show “30 Minute Meals” is STILL running after 21 seasons! It’s a smash hit that has made the lives of cooks everywhere easier (and quicker).

But that’s not all Rachael Ray does.

She’s been in the food industry her whole working life. And, she even turned down a promotion with Macy’s (her first job) after they tried to move her from her candy counter to buyer of accessories. She’s a self-made woman who followed her passion, and now she’s worth over $100 million dollars.

Yes, he’s been a bad boy for forever. After being kicked out of multiple institutions during high school, he officially dropped out at the age of 17. But, as you can see, your past doesn’t have to determine your present or future.

Now, Simon Cowell is worth $550 million, and is well known in many households as the “mean judge” across multiple reality shows. Love him or hate him, he’s built quite a name (and brand) for himself.

You may not recognize her name, but Gwynne Shotwell is very, very rich. And she’s not even an entrepreneur or business owner. In fact, she’s employee #11 at SpaceX, Elon Musk’s company. And yes, we know he’s a billionaire, but Gwynne’s net worth isn’t anything to dismiss either.

Worth $290 million, Gwynne is the president and COO of SpaceX, a commercial space exploration company. She’s been in charge of launching over 600 satellites this year alone. And while it may not seem like a lot, Gwynne also owns 1% of the company, so I expect her net worth to continue to rise over the next few years, or even decades.

2020 was the year of the Zoom meetings, as many employees and their companies quarantined at home due to a pandemic. And the woman who made that all possible and easy? Kelly Steckelberg, the Chief Financial Officer (or CFO) of Zoom. And she has quite the resume. She spent 20 years in finance for companies like Zoosk (a dating app) and Cisco’s Webex. So she’s been doing this for a while!

She helped Zoom go public in 2019, and has been managing ever since. Her net worth is $255 million, and she also owns stocks in Zoom, which saw a huge jump in 2020, thus catapulting her net worth.

Not only is Ritesh Agarwal the only Indian self-made billionaire (with a “b”), he’s also only 27! And a college dropout. Plus, he started his company with the few dollars he had in his pocket and a lot of testing. If he’s not proof of “let your kids follow their passions” I don’t know who is.

He created the ever popular OYO Rooms, an Indian hospitality company, based in Haryana, India, in 2013 at the age of 20. He believes tech and innovation is the way of the future, and he wants his people to have the knowledge and capability to keep up. So not only is he a billionaire, he’s got a kind heart and loves his people too.

You’d be surprised to know that some of your neighbors might be millionaires too!

Contrary to popular belief, many millionaires (and even billionaires) live normal and maybe even fairly boring lives. In fact, many people have died (like this secretary who left millions when she passed) without their family even knowing they had money! And, many have their own small businesses or side hustles that they use to build their net worth, without anyone ever noticing.

Related: 18 Tips to Get Rich (from Actual Millionaires!)

Now, I’m not saying college isn’t worth it for some people. In fact, I think college is still a smart investment in yourself, as long as you know how to leverage it.

There are plenty of millionaires without college degrees. Do you have a goal to become a millionaire?