Jobs That Make the Most Money (Both The Typical AND The Unusual!) 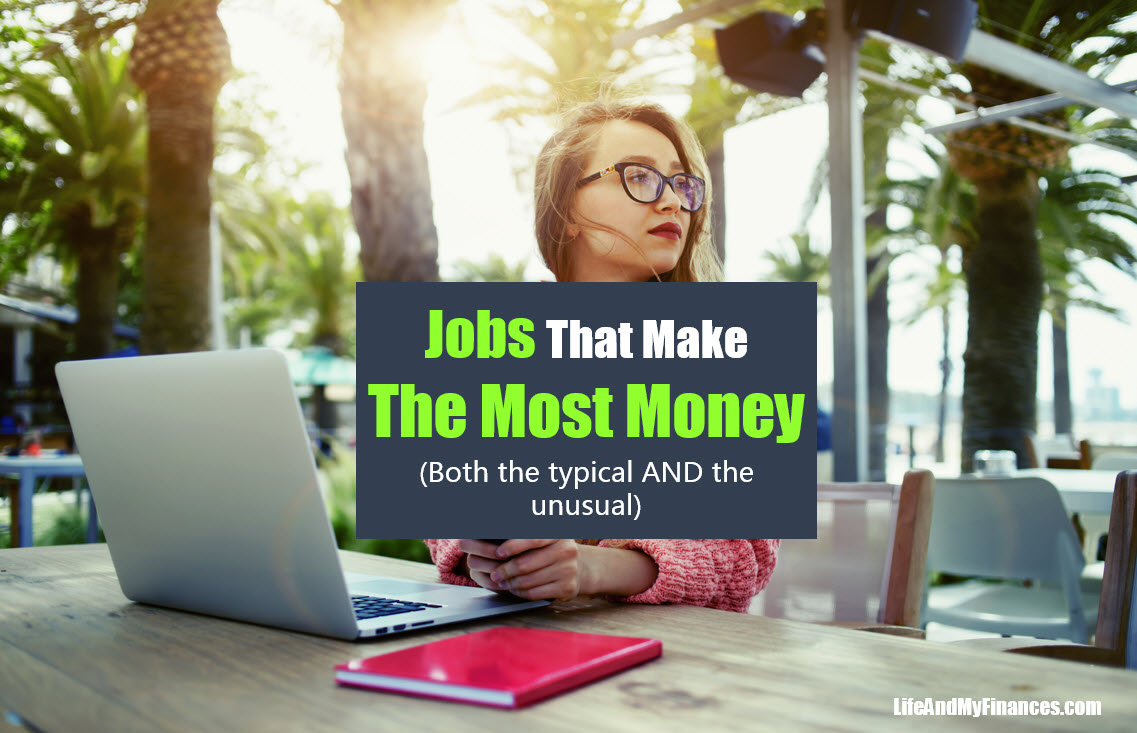 Jobs that make the most money; we all want one but what are they?

The following post was written by an up-and-coming blogger, Lindsey Ralston. Her blog, Big House in the Woods, teaches millennials to become debt free AND mortgage free (that’s what she did) while they’re still young! Interested in some good reads? I encourage you to check her out!

When I was in elementary school, I wanted to be a Marine Biologist. The best paid Marine Biologists make 6-figures. I mean, I didn’t know that when I was young because we didn’t have Google back then. I just knew that “marine” meant I got to swim with dolphins all day and “biologist” basically meant money.

I soon learned that I only had part of that idea correct.

Yes, a marine biologist is one of those “jobs that make the most money” but no, you don’t get to swim with dolphins all day.

So, like most kids, I moved on to a veterinarian. Getting paid the big bucks to play with puppies sounded good! Then, my mom completely ruined it for me when she told me about all the downsides to being a veterinarian. A veterinarian is another one of those jobs that make the most money but, it’s not puppies and cuddles all day.

After that, I was out of ideas.

So, if you’re like me and you’re trying to think of a job that makes the most money other than swimming with dolphins and cuddling with puppies (because that’s apparently all lies), check out all of the options below!

“Normal” Jobs that Make the Most Money

When a lot of people think of jobs that make the most money, four options generally come to mind: doctor, pharmacist, plastic surgeon, and lawyer. 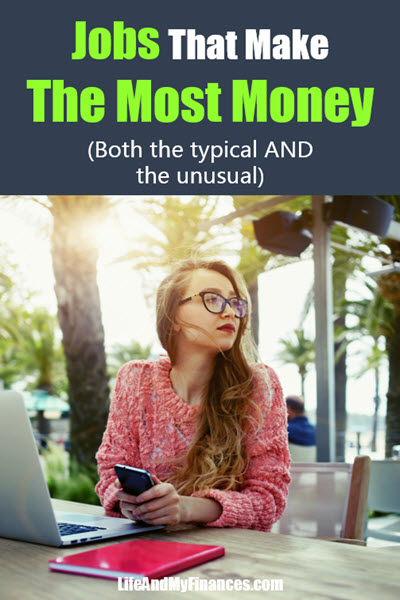 “Doctor” is a fairly generic term for a wide range of specialties. The job title of a doctor can describe primary care physicians, pediatricians, obstetricians/gynecologists, etc.

So, with that in mind, can we classify a “doctor” as a job that makes the most money?

“In the primary care arena, Profiles Database reports family physicians earned a starting salary of $138,000. Internists started at a median salary of $145,000, while pediatricians earned $162,000 and obstetrician-gynecologists earned $200,000.”

Those are the average salaries for first-year medical doctors. That’s not too bad!

Pharmacists play a very important role in our society. Often, they are on the front lines of health care as they help patients manage their prescriptions, explain usage information, and side effects.

“The average Pharmacist salary in the United States is $137,675 as of November 25, 2020, but the range typically falls between $129,722 and $146,639. Salary ranges can vary widely depending on many important factors, including education, certifications, additional skills, the number of years you have spent in your profession.”

Reconstructive Surgeons help people who have been burned, experienced trauma to a body part, or have a developmental abnormality.

Can we label a plastic surgeon as a “job that makes the most money? Definitely!

According to Doctor Salaries:

“Plastic surgeons are among the best paid professionals in the United States, with an average annual salary of $264,000, and top salaries amounting to up to $527,000 a year according to a report from CNN Money. The 10-year job growth for this occupation is estimated at 24.4%.” 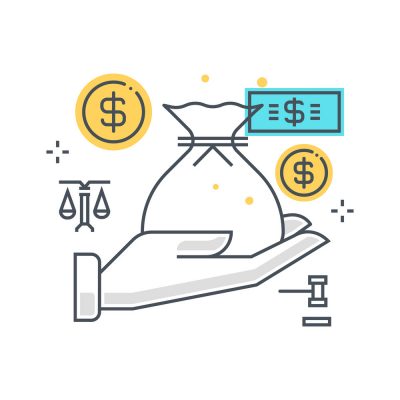 After my dreams of becoming a Marine Biologist or a Veterinarian were squished, my grandmother put the idea of becoming a lawyer into my head.

To her, success came with a suit and a briefcase. Period.

Specifically, she wanted me to become a “Philadelphia Lawyer.” Why Philadelphia? I have no idea. Perhaps she saw it in a movie.

I considered this idea and decided to major in business my Freshman year of college.

So, how much do lawyers make?

Here’s the deal, not everyone wants to go to post-graduate school to land one of these top-paying jobs. If you’re like me, the four years you spent getting your bachelor’s degree was enough. Let’s not drag this out!

Many people think that once you become a doctor, pharmacist, plastic surgeon, or lawyer, it’s just fat city. The money starts rolling in like an avalanche. However, many of these professionals have racked up a huge amount of student loan debt and spend years and years clawing their way out!

While their peers were already earning money, they were racking up the bills in school. Unless, of course, they were one of those smarty-pants who got a full ride to school (and I happen to know a few of those).

Not interested in becoming a doctor, pharmacist, plastic surgeon, or lawyer? Here are some alternatives to those standard jobs that make the most money.

In my opinion, these are the fun options.

Unique Jobs that Make the Most Money

A freelance writer in a specialized niche can make 6 figures. I have a friend who does this.

Being a freelance writer means you get to set your own schedule and work when you want based on how much money you want to make. The more you do it, the more you can charge because of your experience. 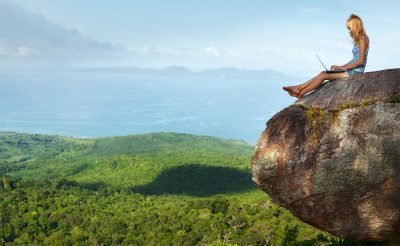 Blogging can sometimes be thrown into the category of “jobs that make the most money.” I know several 6-figure bloggers who love what they do.

Before I knew much about blogging, I thought blogs were just online journals. Bloggers were people who typed their deepest feelings on their blog that no one read.

That couldn’t be further from the truth!

All the bloggers I know dig deep into SEO, copywriting, Google algorithm updates, keywords, and competitive research. From a personal perspective, becoming a blogger who earns a lot of money isn’t for the faint of heart. However, the opportunity is out there if you work hard and the payoff can often be a lot of relatively passive income.

Related: How to Start Your Own Blog

What is a copywriter? Well, if you’ve ever read a brochure, a convincing email from a large company, a billboard, or had a catchy slogan stuck in your head, then you’ve experienced the work of a copywriter.

I could go on, but the point is that copywriters get paid a lot of money to convince people to do or buy things, and the need for them is growing.

You can even be a freelance copywriter and set your own pace.

According to Full Time Nomad:

A highly skilled copywriter on their part could earn over $300,000 per year. Now the best part about being a freelance copywriter is that you can work as much as you want and with more work comes more money.” 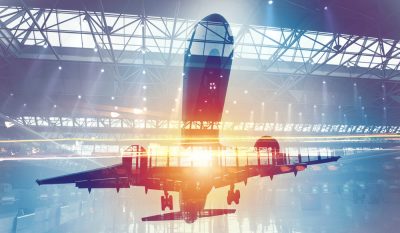 There is always a need for pilots, and they get paid well for their work.

An engineer is a job that makes good money…but what in the world is an engineer?

Career Explorer helps us out with this one:

“Engineers design machinery, build skyscrapers, and oversee public works, but they address society’s needs and problems on so many other levels as well.

At a molecular level, they work on drug delivery systems that work inside cells. At a macro level, they look at the particle flow of pollutants through soil to clean up oil spills, abandoned industrial sites and other biohazards. At a galactic level, they design spacecraft for other-planet exploration. At an atomic level, they develop data storage that focuses on the spin of electrons in atoms. Clean drinking water, safe food storage, and the protection of our environment are also under the engineering umbrella.”

There is a wide range of jobs you can have under the engineering umbrella and that makes the salary range quite wide as well.

I love how this career field has so many options. There is something here for almost everyone.

I know several electricians who love their jobs because they don’t have to sit in an office. Being an electrician is a physical job that gives you the freedom to move. The pay increases with experience and according to your location. 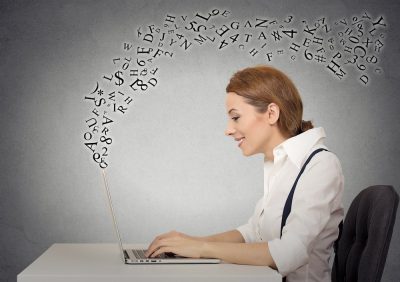 If writing is your thing then consider becoming a ghostwriter! No, your name won’t be published on the cover of a book, but you’ll get the fun of writing and also earn a very good paycheck.

According to Career Track:

“On average, an experienced ghostwriter can make $20,000 per project and well over $50,000 if the client is a celebrity. Beginning ghostwriters average around $5,000. Depending on the topic and length of the book, the average completion time is six months.”

The roles of virtual assistants vary just as much as the salary does.

Your salary will depend on your level of expertise. I have heard of some virtual assistants who make six figures a year.

According to Indeed, though:

“The average salary for a virtual assistant is $19.03 per hour in the United States.”

We all kind of know what a real estate developer does, but Fortune Builder helps clarify our suspicions:

You don’t have to be famous to be a good real estate developer. You just need good management skills and an eye for detail.

“The national average salary for a Real Estate Development is $114,788 in the United States.” 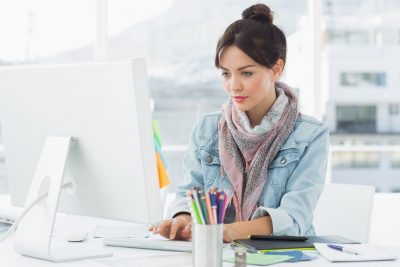 Various colleges teach the field of software development. According to Rasmussen:

“Software developers are the creative, brainstorming masterminds behind computer programs of all sorts. While some software developers may focus on a specific program or app, others create giant networks or underlying systems that help trigger and power other programs.”

Basically, they are the guys and gals behind all the apps and computer programs we use every day. They also develop software for military and medical use.

If you like digging into details and creating something useful, this might be the career for you!

In a recent article, Forbes explained:

“According to the BLS’s Occupational Employment Statistics, the mean annual wage for software developers of applications is $108,080, while for developers of systems software, it is slightly higher at $114,000.”

Jobs That Make the Most Money – In Conclusion

The main takeaway here is that there are good paying jobs out there other than the standard doctor, lawyer, pharmacist, and plastic surgeon options.

I have friends who are doctors, lawyers, and pharmacists and they love what they do. But those fields aren’t for everyone.

So, what’s the rest of my story? After Freshman orientation, I decided that the business world wasn’t for me. Instead, I decided to be an elementary school teacher. And with that decision, I think I made my family cry. 😉

There went the suit, briefcase, and Philadelphia Lawyer paycheck! Now, I’m a SAHM, freelance writer, and blogger. And you know what? I absolutely love every minute.

Of the jobs that make the most money above, which one would you choose? Or is there a better option? Tell us in the comments below!