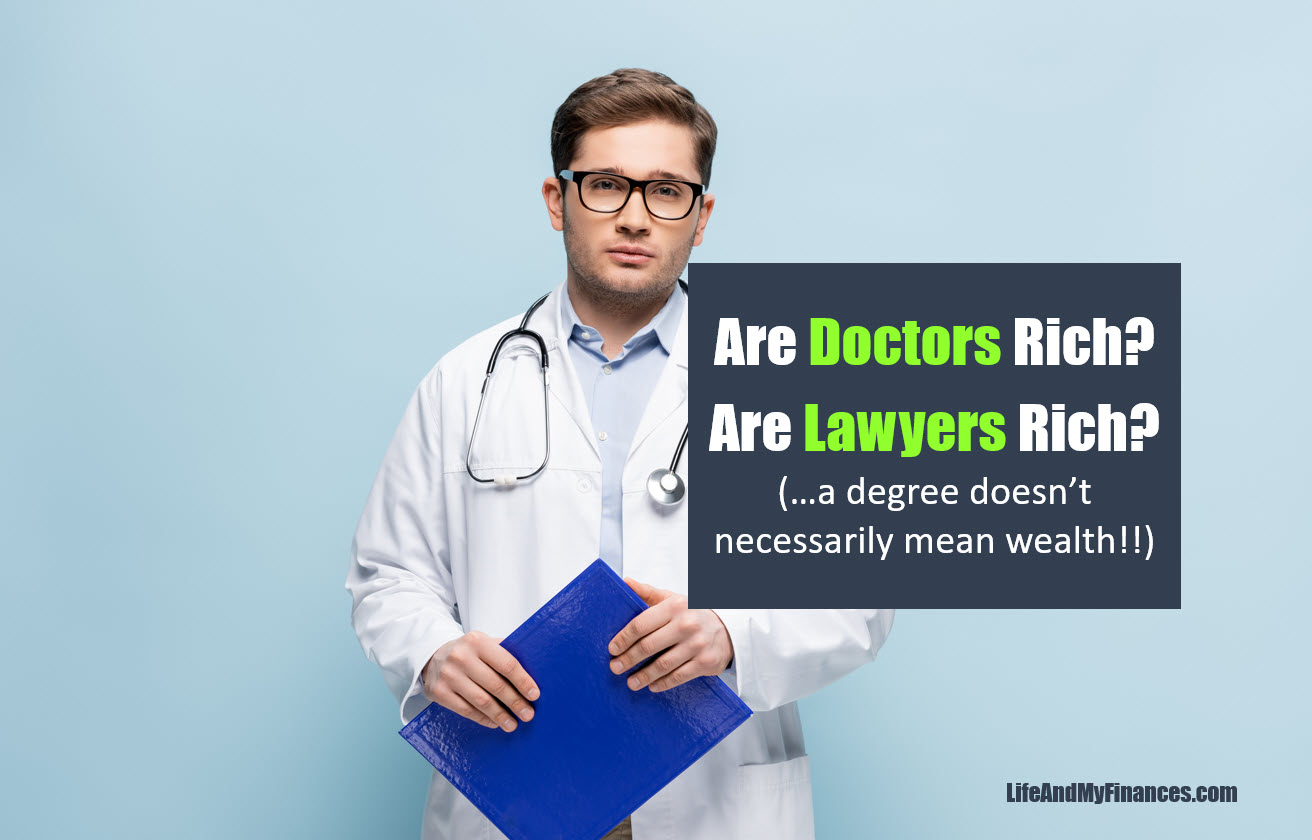 Are doctors rich? What about lawyers? People will often lump lawyers and doctors together when describing “successful, wealthy people.” But if you look at Forbes wealthiest people list, there are relatively few, if any, doctors or lawyers among them. Instead, investors, business leaders, property owners, and oligarchs fill the ranks.

Will Being A Doctor Or Lawyer Make You Rich?

So many people ask the question, “Will being a doctor make you rich?”… 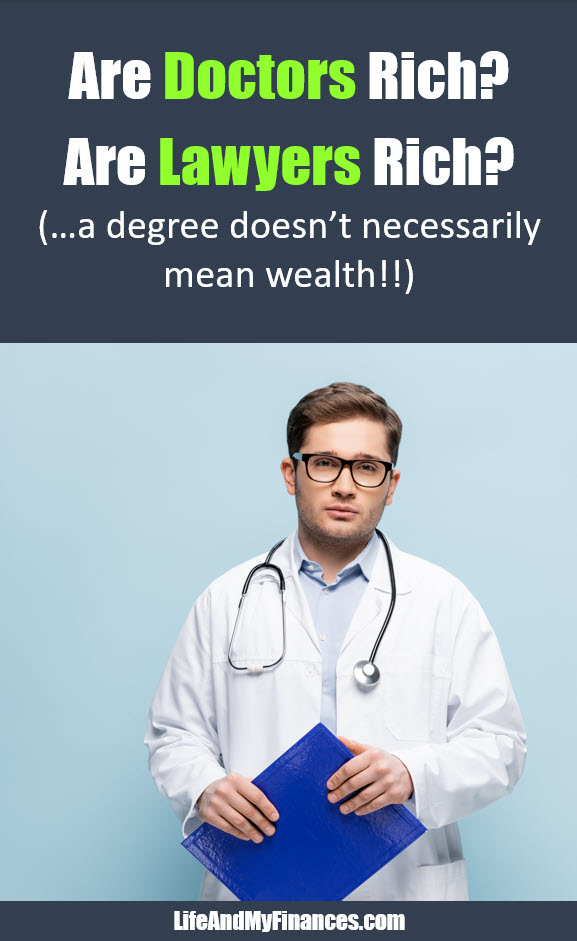 Doctors and lawyers can indeed have a high net worth. And many doctors and lawyers make 6-figures a year. However, it’s important to remember that it can also be extremely expensive to become a lawyer or doctor.

But if you Google “are doctors rich?” or “how much does a lawyer really make”, you’ll find that more often than not, many are average earners or have a smaller net worth.

Both professions require higher education degrees, test fees, and so much more to even get your foot in the door. In fact, the average debt for medical school alone is over $200,000.

Doctors and lawyers can be high earners, especially the farther they get in their career. But, the majority of them have about the same net worth as the average American, even well into their 50s.

Is The Average Lawyer Or Doctor A Millionaire?

Surprisingly, the average lawyer and doctor isn’t a millionaire, at least not before their later years. In fact, statistics show that less that about half of doctors have a $1 million net worth.

This doesn’t mean that you can’t be wealthy as a lawyer or doctor?

It just means that being a lawyer or doctor doesn’t automatically equal wealth.

Related: Average Net Worth in America By Age – How Do You Rank?

What is the correlation between income and wealth?

Having a high income, like being a lawyer or a doctor, is great. It means that you can save money faster and possibly retire earlier.

However, income and wealth are two entirely different things.

When you ask, “Are doctors rich?”, sure, they might have a high income, but they also may have no money saved or invested!

Here are two truths that doctors and lawyers need to understand:

For most people, that’s a fantastic salary. It puts you in the top five percent of earners in the US. It means that you’re able to buy a property in a good area, get full medical cover and drive an expensive car.

Related: Which Income Class Are You In? How Do You Rank?

But income is only one side of the equation. The other side is your expenses.

You might also have other expenses as well, such as…

At the end of the year, you might not have any surplus cash at all, forcing you to continue working. 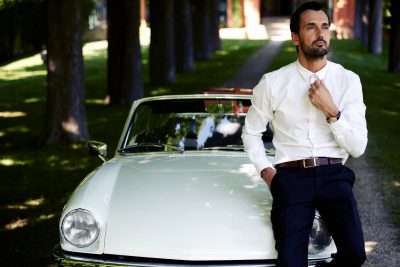 Wealth is a much more potent generator of money than work.

As a lawyer, you might be able to generate $300,000 per year. Some surgeons earn more than $500,000. Again, these are exceptionally good incomes. However, they pale in comparison to what wealth can achieve.

Let’s say, for instance, that you sell a business for $10,000,000 and have that money sitting in the bank. Then suppose that you use it to buy assets, such as stocks, private equity and property that returns 10 percent per year.

All of a sudden, you have an income of $1,000,000 per year, which is likely many times what you could earn working a regular professional job. What’s more, you didn’t even have to work for it. Instead, it came to you in the form of profits and rent.

Related: What is the Interest on 10 Million Dollars? And Is It At All Necessary?

Compare that to relying on income alone. If you never invest, you will never generate more money than what you can earn. Instead, you will always have to sell your time for cash. And, ultimately, that could affect anyone, including a doctor or lawyer.

There is no reason why doctors and lawyers couldn’t build their wealth. However, it all depends fully on their financial literacy.

It turns out that doctors and lawyers are actually in a very good position to increase their wealth. That’s because they can easily generate surplus income — income over and above their basic requirements.

Let’s go back to our lawyer earning $120,000 per year after tax. He decides to live a simple life.

His expenses are now $20,000 a year, implying a savings of $100,000. Now suppose he invests these savings in property and the stock market and earns 10 percent per year.

Furthermore, by year ten his annual interest payments from his investments are running at $135,000 – higher than his lawyer salary!

They certainly can be! They just need to get their money working for them and not against them! 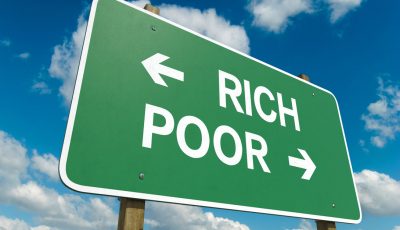 The Power Of Compound Interest

What’s interesting about this calculation, is how interest affects returns.

That frugal regular worker winds up with $478,000 after ten years under the same arrangement, only slightly less than what the lawyer gets after five years.

It’s all to do with the power of compounding. Even though the regular worker only invested 30% of the amount, interest payments added to their principle over time, helping them build their wealth faster.

Today, there are many resources on the internet geared towards helping doctors and lawyers improve their careers and, by extension, their incomes. Practical Law from Thomson Reuters, for instance, provides information that professionals can use to specialize in particular areas.

But does investing in your career make much of a difference?

Well, it all depends on how much wealth you have right now. Why isn’t Elon Musk going back to university to finish his PhD? Because doing so probably wouldn’t make much of a difference in his wealth.

Related: Investing In College: Is Going Back to School Worth It?

However, suppose our $120,000-a-year lawyer doesn’t have any investments and he is fresh out of law school. Now, the value of education goes up. With the right training, he could potentially double his pay to $240,000 after tax – and that would dramatically change his wealth trajectory.

Earning more money can make a difference. But overall, you will build wealth faster if you invest more than you spend, no matter your income.

So what does all this mean to people on high incomes, such as doctors and lawyers?

Essentially, it means that doctors and laywers can join the ranks of the super wealthy (particularly if they keep saving and investing for decades). But they need to understand how savings and investments work — and many don’t.

If you have no wealth, earning a salary of $120,000 feels like a lot of money. However, it ceases to matter as much when you earn the same amount or more in interest. In fact, if you knew you could reliably earn $120,000 per year from your investments, you might decide to retire.

Are Doctors Rich? Are Lawyers Rich?

So, are doctors rich?

Or what about lawyers?

Doctors and lawyers can become wealthy, but it all depends on their mindset.

If they are willing to put away money for the long-term then, yes, they can build tremendous wealth like anyone else. However, if they don’t do that, then they are essentially stuck on the same wage treadmill as everyone else. Again, it’s not about how much money you make, but how much you can save.

Do you know any doctors or lawyers that often flash cash, but are actually broke? You may not know it, but I bet you do!