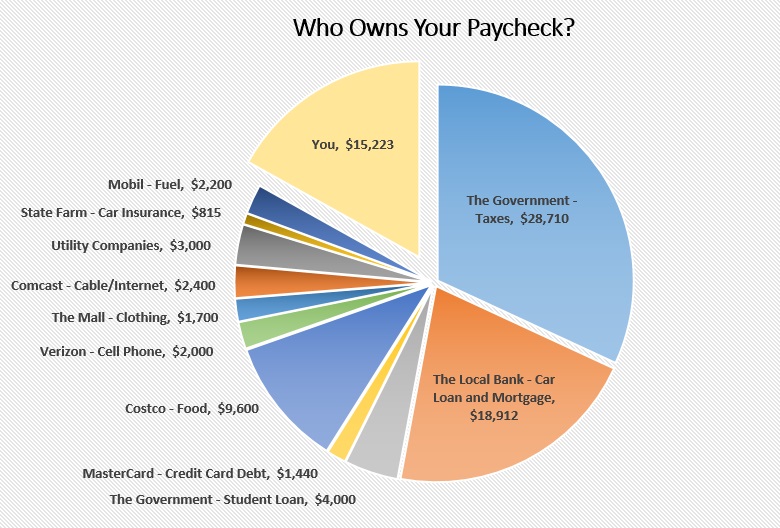 It sounds like a silly question. “Who owns your paycheck?” Well, you do of course! Don’t you? I’m not so convinced….

We all work hard. We wake up before the sun, drag ourselves to the office, expel all of our brain power, and then come home defeated, day in and day out. All for that glorious paycheck. Only…it’s not nearly as good as we think it is.

Let’s say you have a household income of $90,000. Pretty good! Especially considering that the median household income is just $53,657. But how much of that money is actually making its way into your pocket?

Income tax, as we know it today, began in 1913. The government could no longer sustain itself and began mandating a tax on each individual’s income. In 1943, the Current Tax Payment Act took it one step further and allowed the government to actually take our money before we even saw it! This phenomenon still continues today and is simply a “Federal Income Tax” deduction line on each of our pay statements.

Of your $90,000 salary salary, how much does the government claim? Well, let’s take a look…

As you can see on the right side of the page, the government taxes individuals based on the size of their earnings. If you earn little, you are taxed at a low percentage. Earn a ton, and you get taxed at a much higher rate.

Using the Michigan rates, another $3,825 is removed from your dwindling paycheck.

Even though many of us will never benefit from this tax EVER, we’re still required to fork out 6.2% from every paycheck to fund the elderly that decided never to save for their own retirement… I’m not at all bitter about this…can you tell?

The government isn’t quite done taking money out of your pocket yet! They still have one more trick up their sleeve – Medicare Tax. This tax helps provide medical care for the elderly. While I’m definitely not in love with those Washington Fat Cats taking my money, this one isn’t quire as bad.

So who owns your paycheck now? Who benefits from that remaining $61,290? You do right?? Ummm…nope. Not yet.

The title might be a little harsh, but it’s not inaccurate. Because of your own stupidity, you are not the beneficiary of the remainder of your paycheck!

Mainly due to our “gotta have it now” society, many of us have decided to buy things that we can’t afford with a promise to pay it back over time. In other words, we have willingly agreed to make years of payments to experience something that we probably didn’t really need today. 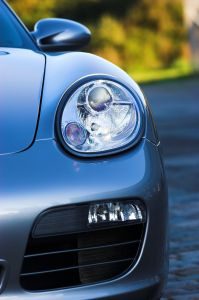 If the average American can make the $3,000 down-payment to buy the new car, then they officially have enough to buy a decent used car that could last them many years. Due to their own stupidity, they no longer own $6,036 of their paycheck. The bank does.

Kids can’t possibly go to school without loans these day, right? That’s one of the biggest lies floating around right now. It is STILL POSSIBLE TO GET THROUGH SCHOOL WITHOUT ANY DEBT. You just have to plan and be intentional about how to do it. Since no one is intentional with anything these days, it therefore becomes impossible…due to poor planning.

If you simply pay the minimum (which I would never recommend by the way), you would owe the credit card company $1,440 a year for a very long time… (it might cause you shortness of breath, but the staggering number is actually 25 years – scary huh??).

Who owns your paycheck? The government, the local bank, and Visa definitely have their hands on it, but who else takes a cut? Unfortunately, your paycheck isn’t yours yet. We still need to fund your survival on this planet! You know, things like food, shelter, water, clothing…

Americans like everything BIG, including their homes. The average home size in America is growing with each year…and so are the mortgages. According to The Motley Fool, the average mortgage payment for a 35-44 year old is $1,073 per month, or $12,876 each year. Ouch. 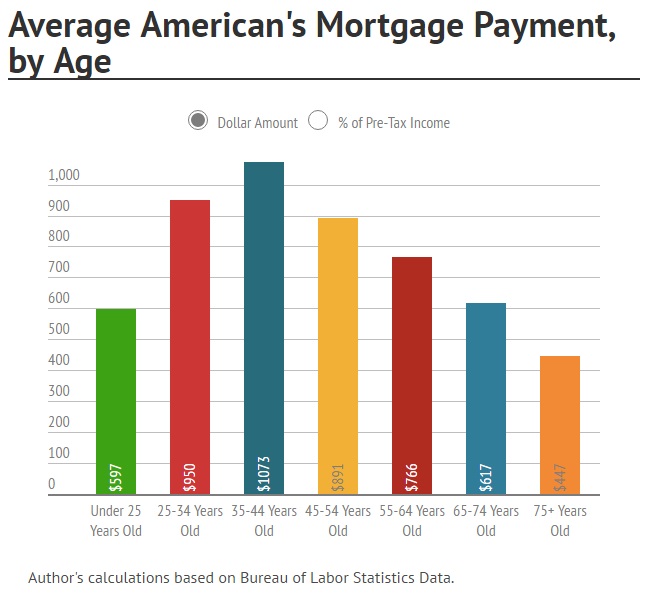 According to USA today, the average cost to feed a family of four is $800 a month, which takes $9,600 out of your paycheck each year.

In 2010, the Bureau of Labor Statistics found that the average family spent $1,700 a year on clothing. It’s honestly not as bad as I thought it would be, but that’s still $1,700 a year that you’ll never see again! Well…unless you’re looking in a mirror I guess… 😉

Ohhh Smartphones… You’re so fun, but you’re so freakin’ expensive!! The typical cell phone costs $200 if you sign up for a contract plan. Then, add on the average service plan of $150 a month for a family and you’re at roughly $2,000 a year! All so we can  take a Snapchat of what we ate for dinner…

Cable isn’t a necessity, but it seems like almost everyone still has it… Add internet to the mix and the typical family forks out $200 a month, or $2,400 a year!

In Michigan, we have to run the A/C in the summer and the heat in the winter, so our utility bills are pretty steady from season to season – somewhere around $250 a month, which includes water and trash pickup. Per year, this tears another $3,000 from our hard-earned paychecks.

A car is a necessary evil for a lot of people, which means that car insurance and fuel are too! According to The Simple Dollar, the average car insurance cost per year is $815.

The average cost of fuel each year….approximately $2,200. Sheesh! Who owns your paycheck? Your car is getting a hefty chunk of it!

After the government and your stupidity, you still had $49,814. Not bad. But then you had to pay for your real life… The mortgage, food, clothes, your phone, cable, utilities, and car related stuff cost you another…. $34,591.

Of your $90,000 paycheck, you own a whopping $15,223. Oh, and don’t forget, you still need to save up for your retirement each year too. So who owns your paycheck? Here’s the horrifying visual:

The sad reality is the typical American owns approximately 17% of their paycheck.

What Can You Do About It?

It might seem like we’re all stuck paying “the man” with taxes, paying the bank for our homes, and shelling out monthly cash for our car loans. But the truth is, we actually have a choice to stop paying many of these bills! No, you don’t need to live off the grid and learn about solar energy and poop bags…(is that the technical term?). You just need to start paying attention! Who owns your paycheck?!

About two years ago, I waged war on all of my expenses and today I live on less than half of what I was spending then. If you’re like many Americans today, wondering who owns your paycheck, and you actually want it to be you (crazy thought, huh??), then I would highly suggest the quality reads below. Take back your life and learn how to keep your hands on your paycheck!!