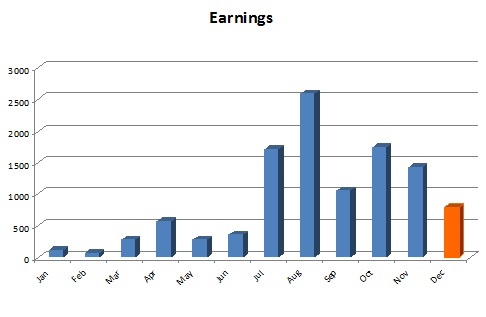 Do you ever wonder how much money this site makes per month? How does it generate the income? Where does it come from? All your questions will be answered in this post.

As expected, these earnings reports have been a big hit (I started doing this in April). Not only is it of great interest for my blogging friends, but I also believe that my readers have a right to know how this site is being funded. So, with no further ado, here’s the earnings report for December, 2011.

All I can say about this month is, “Ouch”. That graph is looking pretty sad. In August I had a break-through month with over $2,500 in revenue, and I have seen a slow decline ever since, which has led to an incredibly slow December (as seen by the graph above). So, what has changed? And, why is my revenue sliding back down toward zero??

Let’s first take a look at the break-down, and then we’ll begin to diagnose the decreasing revenue.

Breakdown of the Earnings: December 2011

I am actually pretty happy about my Adsense revenue last month. At $54.58, it was my best month ever! Two months ago, I switched from “text only” ads to “text and image” ads and it has consistently increased my revenues by 20%! Since the change seems to be working, I’m going to stick with it in 2012.

Also, I’m starting to put up Adsense ads on my new site, Creating A Passive Income, so I’ll expect to see an increase in my revenue for January and the months following. It won’t be a ton, but I bet I’ll get over the $60 for January.

I’m starting to get back into the swing of things with my Staff Writing. Since I started my new site, I’ve been given a little extra incentive to build it up with some high PR links, and what better way than to get paid for them with a staff post? It’s a win-win.

In December, I was able to write 3 articles for a total of $70. Expect to see this amount increase in January because I have some additional responsibilities – plus, like I said, I want to get some high PR links for my new site.

Since I don’t want to flood my site with links and image ads, I have increased my prices a little bit (until some of my existing link deals expire), which has inevitably reduced the interest from advertisers. That’s ok though. My #1 obligation is to my readers, not to the ad agencies. In December, I made one small deal for $175.

Typically, this is my bread and butter for my website earnings. There have been a couple of months where I earned almost $1,000 on sponsored posts alone! But, this month was a struggle. I did not receive too many inquiries via email and was only able to make 5 deals for sponsored posts that totaled $498.75. On a positive note, I did earn an average of $100 per post, which is really quite respectable.

I only have 3 affiliate links on my site, and they do not reside on the homepage. For that reason, there’s not always that much traffic coming through, and it gives me only a minuscule chance of making a sale with the link. So, in the month of December, I earned a whopping $0 via my affiliate links.

I think I’m going to consider bringing some of those links to the homepage since I do believe in the product very much – plus, they actually do pay very well.

So What Happened This Month? Why Are My Earnings Taking a Dive?

When I look back on the previous months, my decline in earnings is really not that complicated. I first got a page rank near the end of June, 2011, and suddenly, advertisers were coming out of the wood-work! It seemed like everyone wanted to throw money my way so that they could get their ads in front of all my readers!

Well, things have obviously slowed down since June, and I should have expected it. Now that my site has a few ads on it, there probably isn’t quite the draw that it once had when it was a blank slate.

Also, the holidays typically slow things down. My November and December were noticeably slower than the the previous months, which was somewhat expected. My January ad offers have already started picking up and I’m ready for a big month!

In the future, revenue will definitely increase because I’ll not only have the new deals coming in, but I’ll also be renewing some old ones. I think I can easily make $1,200+ per month without a ton of effort. If I make an additional effort to contact advertisers, I bet I can ramp this average up to $1,500.

What do you think about this report? Have you had a slow month in December?