A Double-Dip Recession For The UK

Do you remember the big news across the pond a few years ago? The UK was going into a recession and there were immediate plans on what they were going to do to work their way out of it. From what I recall, nearly 30% of the government workforce was laid off in an effort to balance the country’s budget. I remember seeing this news story, and I commended the UK for what they were doing. Of course, laying off government employees was not going to stimulate the economy, and actually, things were likely to get worse before they got better because of it, but the government was taking responsibility for their actions, which is more than we can say about our leaders here in the U.S.

Currently, Mr. Obama and the leaders in Washington are trying to figure out a way to stop the imminent “Fiscal Cliff”. Unfortunately for us in the U.S., our political leaders don’t tend to compromise well, which could invariably hurt the economy of the entire world.

The UK Takes a Dip… Again

The future unknowns of the U.S. certainly aren’t helping the future of the UK, but there are further issues that need to be addressed, which is why the UK is diving back down into their second recession in just 4 years. 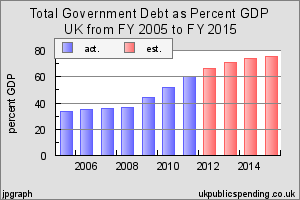 Take the image above for instance. The government debt in the UK as a percentage of their GDP is quite terrifying to say the least. This past year, the debt of the government equaled 60% of the nations GDP. By 2014 and 2015, the debt is projected to climb to approximately 75% of the GDP. It probably goes without saying, but if this percentage continues to climb, the UK will soon not be able to pay their debt, which will lead them into a downward spiral; that is, until something changes.

I have great faith in the UK’s government. They weren’t afraid to take drastic measures before, and I’m sure they’ll be willing to do whatever is necessary to survive and thrive in the future as well.

What About The Citizens of the UK?

For those of you that reside in the UK, I would suggest that you stash away some cash if possible. Save up regular currency, but also, if you have plenty of liquid assets, don’t be afraid to invest in some precious metals that have true value because of their material, not because the government says it’s valuable.

If you do not have cash reserves, you may need to apply for some short term loans to get by from week to week. If you are finding yourself in this predicament, you might want to look into gimmedosh.com.

While this transition is most likely going to be difficult for all of us, there is a light at the end of the tunnel. We survived the Great Depression of the 1930s, so I’m sure we can make it through this!

Do you have any opinions on what the UK or the U.S. needs to do to get through this recession? Let me know!