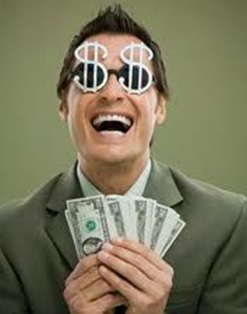 If you knew me at all, you would know within 0.01 seconds that I didn’t write this article. I am definitely a no-debt person and always do my best to steer clear of debt at all costs (in fact, I’m recently debt free again!) I do feel that it’s good to have an opposing view once in a while though, so let’s hear what Bob Richards, author of The Retirement Blog, has to say about why debt is good. I encourage you to leave your comments! I know I will! 🙂

Some people think that getting out of debt is good. This author disagrees.

It’s not that poor people are stupid; they just don’t think about money correctly. In fact, poor people are not necessarily people who have little money. You may have seen documentaries on television about people who win the lottery and are then broke in two years. These are people who at one time had money.  A poor person who gets money will end up poor because they have wrong thinking. Generally, poor people think that money is for spending.

Rich people are a different kind of cat.  Rich people do not use debt to buy consumables. They only use debt to buy assets that endure (e.g. businesses, real estate, other assets that will generate money). These are investments (poor people don’t usually grasp the difference between spending and investing).  Rich people don’t like to spend money (and thus, the stereotype of the billionaire who still clips coupons).  Additionally, they want debt because in many cases, they can borrow money at say 1% and then invest it to get 6% (this is how banks make money).  Poor people would also like to do this but they generally never accumulate much money because, well, they are poor people.

Note that a poor person can become a rich person.  They just need to adopt the right thinking.   You have read many accounts of people born in poverty that became rich.  This author had a very middle-income childhood; my father sold home appliances and my mother was a bookkeeper,
neither college-educated.  But their son went on to get a Harvard graduate degree and have a million dollar net worth at age 34.  See the move Pursuit of Happyness (a true story) with Will Smith.  It’s an example of a poor guy that becomes rich.  Of course, he takes actions that few
people are willing to take and most importantly, thinks like a rich person.

Back to why the right type of debt is good.  I like my house.  I have debt on it.  Had I not borrowed to buy it, I could not have purchased it years ago. I did not have all that cash.  So I live better because someone let me borrow money. The debt costs me about 3% and I can comfortably earn 8% on that money.  Where can you earn 8%.  There are many ways but one way is that I lend money to poor people.  I don’t know if they are
poor or rich but I lend money to people who have ruined their credit (i.e. they think like a poor person and have used bad debt) and cannot get cheap money at the bank.  So I lend them money on their homes at 8%.  They can pay me back any time so they are not forced to pay that rate.  I am not a vulture.  If it weren’t for me, they would lose their home. At any time they qualify, they can go to the bank and get the “rich person’s rate” of 3% and pay me off.

Another reason rich people like debt: most countries in the free world are democracies which results in elected officials spending more money than is raised by taxes.  This causes inflation over time and the devaluation of the currency.  So when you have debt, you pay off an item that has a lower and lower value over time. In other words, if a piece of real estate doubles in value over 10 years, the fixed debt on that property is paid off with money of lower relative value.  Here’s the example:

I have a business.  I have debt on it.  I was able to expand and grow my business by borrowing money.  I comfortably make payments because the rate I earn on the money borrowed is more than I need to pay each month.

The use of good debt (for investing) allows one to live better, have more things to enjoy and in general, live more prosperously.   The lack of respect for debt and using it inappropriately can easily lead to poverty.

I suggest you stop thinking about getting out of debt.  Rather, seek to get out of bad debt, get into good debt and start acting like a rich person.