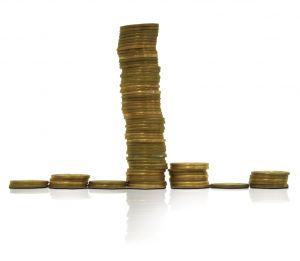 If I asked you right now, “What is your yearly salary?” could you tell me? Would you know within a few bucks how much you make per year? For most of us, the answer to this question is yes. Beyond this, our salary becomes our unit of measure between friends and their earnings. For many, talking about income is taboo, but for those of you that do discuss your earnings, you know whether or not your friends make more money than you per year. But, what you might not think about is how they actually earn their money and how hard they have to work for it before it goes into their pocket.

For many of us that live in Corporate America, this is how the pay system works. When we start out on the bottom of the totem pole, we earn about $35k per year, but our responsibilities are few. As we move up the ranks, our title starts sounding a little better and we might get paid a little more, but with the added responsibilities come more hours in the day to get them accomplished. So, our pay might be bumped from $35k to $50k, but our hours might have also gone up to 55 hours per week instead of 40. Between the increase in pay and hours, our relative income (our hourly rate) has barely risen at all.

When the rich view whether a job is worth the income or not, they do not think in terms of salaries or the lump sum pay, they calculate the absolute income of the project. In other words, getting back to our salary example. If they were working 40 hours for $35,000 per year, they would effectively be earning $16.83 per hour. One day their boss comes in with a big smile on his face because he’s going to give you a promotion! In your new role, you might have to increase your hours to 55 per week, but your pay will increase to $50,000 per year. Quite a jump right? Well, if you have a rich person mentality, you might not be so excited. With this new job, you’ll be earning a relative income of $17.48 per hour, which is not that big of a jump considering the amount of work you’ll be putting in.

You Need to Earn Enough to Survive

Now, it’s all well and good to talk about relative income and how it should be our only measure when it comes to your salary, but you also have to earn enough to put food on the table as well. You might have a great business setup that allows you to earn $150 per hour, but when you only work one hour a day, that $150 doesn’t look so awesome. Be sure to take a look at both your relative income as well as your absolute income when making important decisions about your earnings.

So Who Is Richer?

So let’s get back to your income comparisons between your friends. Let’s say you earn $50k per year by working 40 hours per week, but your friend earns $50k by working 20 hours per week. Who is richer? For those that think only in terms of absolute income, they would argue that both friends have equal riches, but I think that that’s dead wrong! The one that only works 20 hours per week is clearly richer than you are! They only have to work half as long to make equal pay, which means they have 20 hours more per week to do whatever they want! With this in mind, they clearly have more wealth.

Bringing It Back to Passive Income

If you have been reading regularly, you know that I have been toying with the idea of purchasing a quad-plex (down the road that is, not today). The reason for this is because of the difference between relative income vs. absolute income, but also because of passive income. At my job, I earn X amount of dollars and in order to get it I have to work X number of hours. With this set up I’ll always earn X number of dollars per hour and it won’t change much, even with pay increases and promotions. If, however, I start building up passive income (like the quad-plex), I can increase my earnings per hour severely because there are fewer hours per week worked.

This may be a little confusing, so let me try to illustrate. If I purchased a quad-plex and got it to a point where each of the units were being rented, I would most likely have little work to do throughout the week. At most, I would work 10 hours per week, which means that my income is fairly passive (compared to a regular job anyway). Each week, I would earn $600 from rent, which means that my relative income is $60. Since I have so much spare time on my hands, I am able to find another quad-plex that will earn me $900 extra dollars per week. Since they are right next to each other, my weekly work might only increase to 15 hours per week, while my earnings increases to $1,500 per week, which bumps me up to $100 per hour.

You might argue that my time might eventually run out as I purchase more and more rental properties, but nope, it’s not going to happen. Instead of continually managing my own properties (which would inevitably lead me to work 50 hour weeks again), it would be wise for me to hire a property management service. This will take my earnings down to $750 a week, but since I’ll only have to work 5 hours per week now instead of 15, my relative income actually increases to $150 per hour. Not only do I make more money per hour now, but I have more time to find my next investment property. See how important relative income is?

How will you increase your relative income?