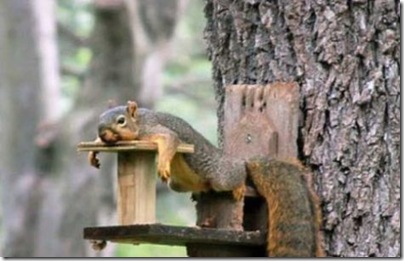 Nutty the squirrel didn’t really feel like gathering up nuts this fall. After all, he has worked hard for 20 seasons prior to this one. He deserves a break! Just this once he would like something good to happen to him, so this year he decided to be a little more proactive about his luck.

“Hey Rocky, how about we make a deal this year?” inquired Nutty. “I have worked hard all my life and really deserve to take a break this fall. If you gather nuts for me, I promise that I’ll gather yours for you next season. Plus, I’ll gather up a few extra for your wife as well. What do you think?”

Rocky wasn’t so sure at first, but he has been friends with Nutty for many years and knew he could trust him.

“Sure. I’ll do that. I’ll start working double-time tomorrow!”

If You Have Consumer Debt, You Are a Lazy Squirrel 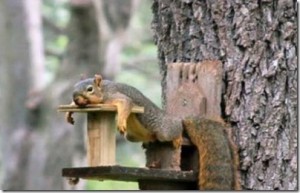 I hate to be blunt, but seriously, do you really need all of the stuff you have? If you have consumer debt right now, then I label you as a lazy squirrel.

Just like Nutty the squirrel, you at some point decided that you deserved to have something that you truly didn’t (because you didn’t have the money for it). Maybe it was furniture, a television, a car, or a vacation, but you could have done without each one of these things and put them off until you actually had the cash to pay for it. Plus, if you had waited, then you would have saved yourself money in two major ways:

We all know that buying something on credit will cost us some money in interest, but many times the additional payment isn’t really all that much to worry about. For instance, my friend once borrowed $5,000 for a vehicle, and over the course of 4 years he only had to pay back a total of about $5,250. That $250 wasn’t all that significant, but what really got him was his upgrade in his vehicle selection. He intended to pay cash for a $5,000 vehicle. Instead, the salesman talked him into a $10,000 truck that he didn’t really need. Both vehicles would get him to and from work with the same effectiveness (fun fact though, his $10,000 was the biggest lemon I have ever seen and often failed to get him to his job! – my $2,500 Honda has been 10 times more reliable), but we always want more don’t we?

Nutty the squirrel made a deal with Rocky that wasn’t all that crazy. Rocky would gather extra nuts this year and Nutty would return the favor by collecting double the nuts (plus a few interest nuts for the lady) next season. But, just like Newton’s First Law says, “An object at rest stays at rest.” That lazy squirrel is likely to stay lazy for another season.

Sure enough, Nutty liked his relaxing fall so much last season that he decided to reward himself with yet another one. Since Nutty isn’t a bad guy, he decided not to break his deal with Rocky. Instead, Nutty made yet another deal with a couple of ambitious squirrels, Sandy and Bob (my creativity is slipping on these squirrel names I know…). Sandy would provide nuts for Nutty and Bob would provide nuts for Rocky, and in return Nutty agreed to gather up their nuts next season (plus he agreed to collect some delicious berries for an additional incentive).

As you can probably already detect, Nutty is digging himself into a quick hole. Currently, he has two IOUs out there for gathering nuts. And, he still owes the interest on the extra nuts and the berries. One more deal like this and Nutty likely will never pay off his debts!

Why The Heck Do People Sign Up For This?

It was so incredibly simple for you to realize that Nutty was digging himself into trouble (pun intended – I’m hilarious like that sometimes). Why is it that we are so blind to realize the stupidity of our own debts? Three reasons, and you’re not going to like them:

For whatever reason, we all want to have what others have. We think it will make us happier, but typically it only brings more problems. Others of us have a bit of insecurity and immaturity. We want to have something because we think others will envy us and have a greater respect for us. If we feel like a big shot, surely we will become happier, right? Typically, no. And finally, many of us simply can’t wait to have something. Saving $25,000 would take way too long, so we just hop into the vehicle today and promise to make payments over the next 7 years (with some interest of course). Each one of these emotions end up driving us into debt. And as if that weren’t enough, there’s more.

Just like Nutty the squirrel, we often don’t stop at one debt. Instead of just using debt once to satisfy a single “need”, we end up getting comfortable with it. We use it to buy our car, and then some expensive furniture, and then we start loading up our credit card with many unnecessary purchases, certain that we’ll be able to pay off the debt at a later date. Unfortunately, instead of paying off the debt, many of us are left trying to tread water with a couple of cinder blocks tied to our ankles. Somehow, many of us manage to do it for years at a time, but are we having fun? Certainly not. Do we wish we were debt free? Absolutely. So why not stop buying crap now and get started paying off those debts? The only thing stopping you is you.

Were you once a lazy squirrel that is now in the fight to get out of debt? Tell me about it in the comment section below!