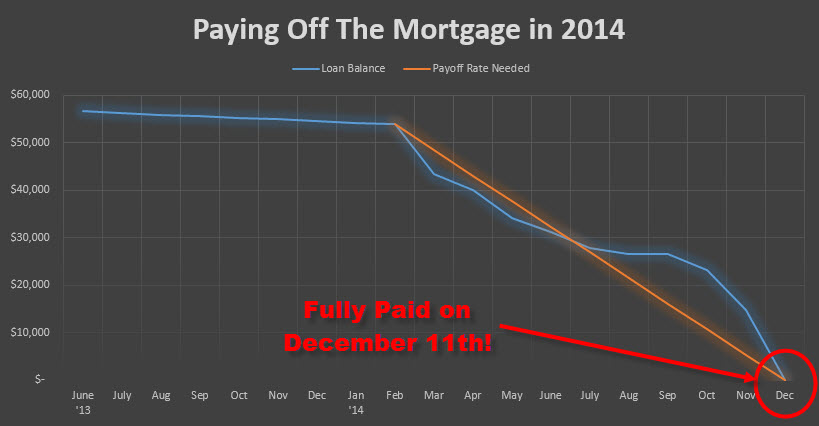 No credit card debt, no student loan debt, no house debt – they are all paid off in full.

How did I get here? Through careful planning…and then through a whirlwind of hard work and sleepless nights when those careful plans went to crap. It still feels a bit surreal, but as of December 11th, 2014, I am completely debt free (and I intend to stay that way for life).

It was about one year after my wife left me. She had demanded $22,000 and I was miraculously able to come up with all of the money in just six months. Sure, I was frugal before and enjoyed saving money, but I had no idea that it was possible for me to acquire such a large sum of money in such a short period of time!

This emotionally draining experience lead me to a bright and exciting idea – “If I can come up with $22,000 in six months, I wonder if I could pay off my $54,500 mortgage in less than a year’s time!”

And the bug was planted. In December of 2013, I decided to tackle my last debt head on. My mortgage would be dead by December 2014.

How I Paid Off My Mortgage – The Plan of Attack

So here was my plan all added up:

How I Paid Off My Mortgage – How It Actually Happened

Here’s the month by month breakdown of how the mortgage actually got paid off:

In January and February I already broke away from my initial plans of paying down the mortgage. Instead, I decided to beef up my emergency fund to $15,000 just in case I had a catastrophic occurrence (like losing my job or something). Oh, and I found an amazing deal on a 2008 Chevy Malibu, so I decided to buy it, drive it, and then hopefully sell it for a profit when I got tired of it.

The blessed windfall came in March. First, I discovered that I paid in way to much for taxes for my business earnings and was set to get $4,700 back. Then, with all of the snow we had, water leaked into my house from off the roof, so my insurance company cut me a check for $2,850 (I still haven’t repaired my ceiling with this money – soon though). And finally, I was able to sell the Malibu for $6,000, which netted me a $650 profit. All in all, I was able to beef up my savings account to $15,000 and pay $10,000 off of the mortgage loan. The debt payoff train was finally starting to get some traction.

In April I really decided to cut back on my expenses. I called the phone company and got my monthly bill reduced, I stopped paying the bank to take care of my escrow for me (which they always messed up anyway), I shopped smarter for groceries, and I switched insurance companies to get a better rate. With all of these savings, I was able to take another $3,500 off my mortgage.

In May, my plans were crushed. Google thought I was doing something suspicious and penalized my site. My web income came to a halt. Without this income I would never be able to achieve my goal of paying off the house, so I decided to start writing for other sites. I reached out to all of my blogger friends and asked them if they would like me to write articles for them. The response was overwhelming. In the four months following, I wrote over 200 articles for a total of $2,500 or so. This didn’t make up for all of my lost income, but it did still give me a chance to pay off the mortgage. By August I had the mortgage down to $26,656. Continuing my scrimping and saving wouldn’t quite get me to my goal – I needed something else – perhaps another car to flip.

In September, I found my next money-maker – a 2001 GMC Sierra. The whole purchase was a little sketchy, but in the end I cleared $1,350 when I sold it in November. I was suddenly back on track and had a great chance of paying off my mortgage by the end of the year.

By December I had $14,799 left to pay and I had about $15,300 in my bank account. With one more paycheck I vowed to make that final payment. This happened on December 11th, 2014. My bank account rose to over $17,000 and I headed straight to the bank. With interest, my final payment was for $14,814.62. The money was transferred from my savings and presto! I was now mortgage free! And what a sweet feeling it is! 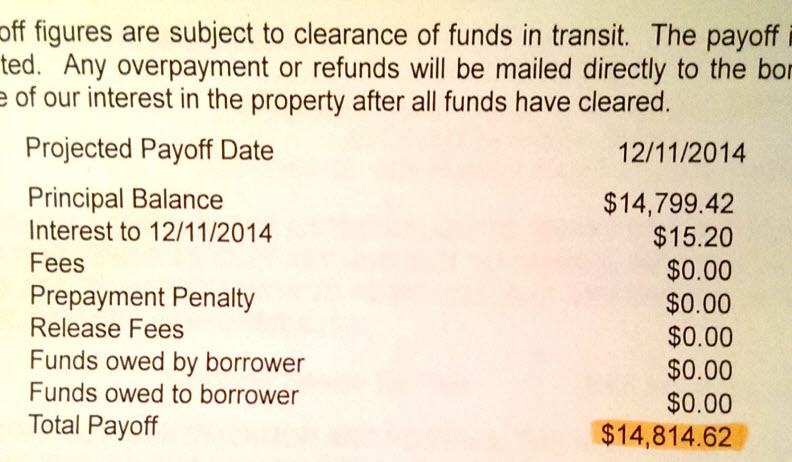 You Can Do It Too

I have had so many emails and comments from my readers saying that I have inspired them to get their money in order and pay off their debts. These emails always make me smile! By making this final mortgage payment I hope that this challenges you to do even more! Save more, earn more, become more determined. At the end of it all, you will be glad that you worked as hard as you did to take care of your debts. I know that I have no regrets! My mortgage has been slain and I couldn’t be happier!