Will I Pay Off The Mortgage This Month? 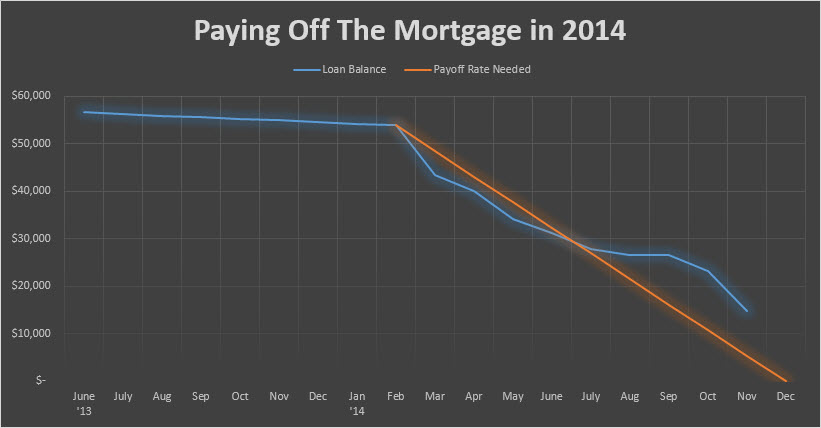 I have spent the last 11 months aggressively paying down my mortgage with the hopes of making the final payment here in December. So am I going to pay off the mortgage this month? It actually looks promising! Before I get too far ahead of myself, let me show you how I’ve gotten to this point.

From the Beginning: Pay Off The Mortgage in 2014

After paying my ex the $20,000 she demanded in 2013, I realized how quickly I could actually accumulate money! This got me thinking about the mortgage I hated, and I soon began to wonder if I could make it disappear inside of a single year! To do this I would have to come up with $54,500 in 12 short months – not an easy task, but I rolled my sleeves up and dove in.

From the very beginning I cut down on my bills, spent as little as I could, and worked incredibly hard to earn a large income. By focusing 100% of my efforts on paying off the mortgage, I was able to do the following through October:

This wasn’t exactly the way I envisioned paying off the mortgage. Some months I barely paid off anything, and others I was able to take off $10,000! As I should have guessed, nothing happens perfectly or linearly, but in the end I hope to come out completely debt free!

What Happened in November?

November was a little crazy – in a good way. If you remember, I bought my truck back in September and finally received the title toward the end of October. Since I had already spiffed up the truck and had it ready to flip, when I got the title I put it up for sale immediately. In total I had about five calls on it, had one looker, and they ended up driving it home with them!

While there was nothing standard about this buy and sell process, this truck is the most profitable flip I have had! And, the day after the truck sale I immediately put the $5,650 toward the mortgage, which brought it down to $17,700 or so.

After the truck sold I hopped back into my trusty gas sipping Honda and kept my expenses low the entire month. I also wrote a few extra articles during the month for some extra income, and my website earned a little more income than normal which was a nice treat! All in all, I was able to put another $2,900 or so toward the mortgage on top of what I had already paid off with the help of the truck sale.

At the end of November I was able to pay another $8,535 toward the mortgage! Here is a chart of my progress so far this year:

Like I said before, the payoff isn’t necessarily that pretty, but I think it will still allow me to pay off the mortgage by the end of this year! I have 25 more days and I am going to fight to the finish!

My Hope For December

December is looking pretty good so far. My mortgage balance is $14,799 and I have $15,300 in the bank. I don’t have any known large expenses coming up and my website is earning some pretty good money already in December. And, I might even get a bonus from work which would add a couple hundred bucks to my bank account. All signs at this moment point toward paying off the mortgage by the end of this month.

The way things are rolling I expect to grow my bank account to $18,000 (at minimum) by the end of this month. If I used a chunk of this money to pay off the mortgage, I would have approximately $3,000 left and absolutely no debt. Do you think I should do it? Should I pay off the mortgage? My vote is absolutely yes. With zero debt, my living expenses will be about $500 a month, which means that my $3,000 “emergency fund” is actually 6 months’ worth of expenses. And, if all continues to go well I can bank $2,500 a month into my savings account and quickly ramp it back up over $10,000. So what do you think? Should I pay off this stinkin’ mortgage before the month is over???