The Ultimate Recipe for a Financial Breakthrough in Your Marriage 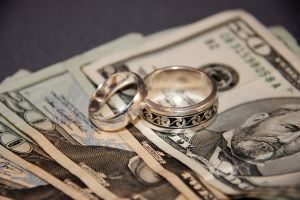 Over the last few years, I’ve gained a number of insights into the world of marriage and money – first, as a wife living on a budget with my husband, and second, as a financial coach. I am a far cry from the leading expert in my field, but if you’re looking for a financial breakthrough in your marriage, then I’d like to share what I’ve learned with you. Namely, the key ingredients to get you started.

When you think of a breakthrough, think of that first step toward change, not the entire journey. That’s what we’re focusing on here. It’s the subtle “aha” moments.

A single mother of two sat with me, organized her debts, and calculated, for the first time in her life, an estimated debt payoff date. Her eyes widened as she realized the end of her burden of debt was closer than she thought. A fire lit deep within this woman that carried her on to pay off her debts quicker than ever before.

In marriage, the dynamics always vary. I won’t pretend to understand your specific situation, but I do know that three out of every four married couples are experiencing financial stress, according to the American Psychological Association. Before we launch headlong into the steps that could lead to a financial breakthrough in your marriage, remember that the only person you can ultimately change is you. Keep that in mind as you read through this list.

6 Step-Recipe for a Financial Breakthrough in Your Marriage

People living paycheck to paycheck make up 76% of the American population. I used to be one of them. What changed for my husband and I was our willingness to make some changes. We took a class called Financial Peace University and figured out how to budget. All of a sudden, we had a budding emergency fund instead of credit cards burning holes in our wallets. That was one of our first “aha” moments.

I tell my coaching clients that their willingness to walk through those doors and meet with a coach (AND their spouse if they’re married) about their finances is a major step. Simply put, willingness takes courage.

A DOLLOP OF TRANSPARENCY

Once you’ve decided that you’ll face the financial facts with your spouse, you need to be honest about a few things: Your past actions, your feelings, how your spouse’s actions affected you, and what you’re willing to do differently in the future.

One of the biggest burdens a spouse can carry is the burden of an unspoken grudge. I recently met with a couple who thought their communication skills were fine until we began discussing how they give their money. This couple was significantly behind on their bills, but only the husband fully understood the gravity of their situation since he did the budget.

His wife felt stressed and anxious that they weren’t tithing to their church, and her husband said they couldn’t afford it. A grudge developed between them and only after being honest with one another during our appointment did they realize the damage this one issue was causing. The wife admitted that she didn’t want anything to do with the finances in the past, so she didn’t understand how serious their situation had become. The husband didn’t fully understand how important giving was to his wife.

We created a 90-day plan to catch up their bills and begin giving to their local church again. A financial breakthrough in your marriage might simply mean opening up about how you feel, and being open to hearing his or her honest feelings right back.

When I met with one woman, she was facing financial burnout. She’d just taken on a second job after her divorce was finalized and she needed to provide for her son. The stress of her financial situation was evident on her face and body language. We began discussing goals that she could set as a way to focus on the positive future and not just the negative here and now.

We discussed creating some cutbacks in her spending to reduce the monthly stress of running short on funds. One cutback mentioned was cable. She admitted how it made her feel like a failure when she compared her situation to that of her friends. “I can’t even afford my own cable,” she said. That’s when I told her that this cutback would allow her to provide a higher quality life for her son by giving him clothing, food, shelter, outings to the park, etc. When she shifted her gaze away from how her friends might perceive her, she saw the opportunities with her son and was greatly encouraged.

The same goes for your marriage. What’s one goal you can set that will add a positive value to a potentially negative step (i.e. Eating out less frequently so that you can apply an extra $100 to your mortgage payment, shaving off thousands you’d spend in interest down the road).

If you’re willing, transparent, and goal-oriented, then it’s time to add grace. At some point, someone’s going to mess up. Forgiveness is just as good for your soul as it is for your spouse’s. What does that look like?

Grace is a wonderful thing, but sometimes tough love is needed for a financial breakthrough in your marriage.

When I met with one young couple going on their third month of unemployment, the husband vehemently promised to get a job as soon as he could. His wife had stepped up as the sole provider for their family of four by waiting tables as often as she could. They were going to lose their house soon if something didn’t change. This young wife knew the truth about her husband’s job search. During our appointment, she finally confronted him about making false promises when he continually avoided searching for jobs and failed to show up to scheduled interviews. He confessed that she was right.

That opened a door of communication throughout the rest of our appointment and led to some tighter accountability on the husband’s job search. Within a few weeks, he was hired as a car salesman and they were able to stay in their home. Sometimes, help is needed, whether it’s in the form of a marriage counselor, financial coach, or trusted friend. There’s nothing wrong with that.

After you’ve mixed each of these ingredients together, like any good recipe, serve it. By serving your spouse, you’re focusing less on you and more on him or her. It’s not always easy (OK, it’s never easy), but if it leads to even one financial breakthrough in your marriage, then it’s probably worth it, don’t you think?

Which one of these steps would encourage you the most in your marriage today? Share in the comments below!