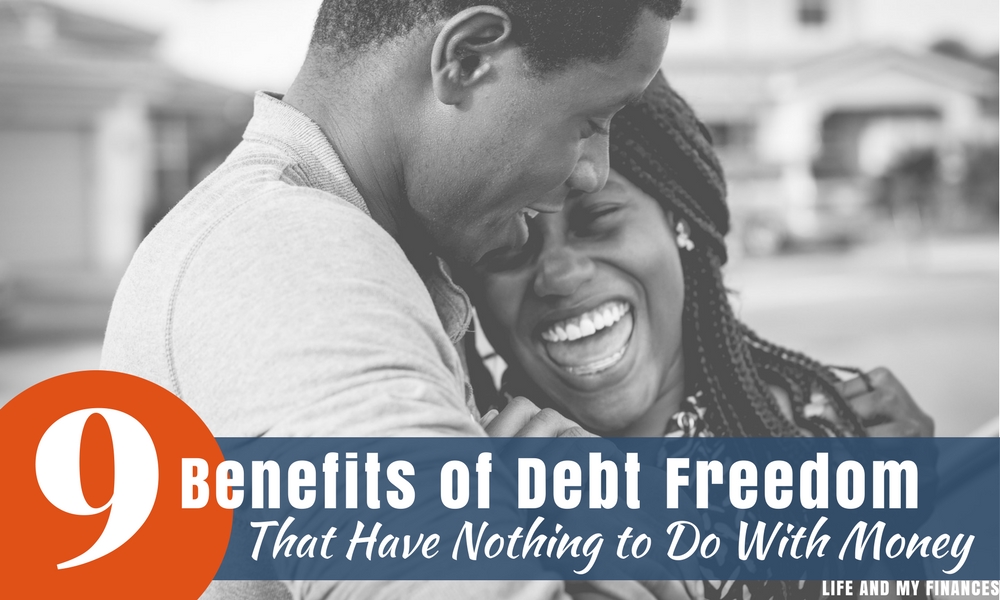 You know those emotionally moving videos on Facebook where the gruff old guy gets gifted with those special glasses so he can finally see color? He opens the box, glances up at his wife and kids and gives the look of, ‘Yeah, right. This isn’t going to do anything. Nothing’s going to look any different.’

…and then he puts on the glasses and everything changes.

He can suddenly see green, orange, red, yellow. It’s vibrant, it’s breathtaking, and even that gruff beat-down old man can’t help but break down and cry at the beauty that’s in front of him! The glasses made all the difference in the world.

I feel the same way today – but not about color – about the benefits of debt freedom.

It’s like everyone in this world is color blind, but has no special glasses. I’m actually the only one that has a pair, and I’ve been wearing them for three years. I continually talk about how amazing they are…

“Hey, look through these glasses! The world is different than you know; it’s actually more beautiful than you can imagine! You absolutely need to put on these glasses!”

They glance up at me with that look…

“Ummm, no thanks, Derek. There’s nothing wrong with my eyes. I’m just fine with my debt and there’s really no need for us to change what we’re doing. Sure, we could have more money in the bank, and yes our cash flow situation could be a bit better, but we’re doing just fine.”

They think that it’s all about the money, but in reality, that’s only about 25% of the equation.

These 9 benefits below – they’re the real reasons to get out of debt.

One of the biggest benefits of debt freedom is that you’ll start to give without even thinking about it. And I’m not just talking about money. Since you’re no longer chasing your tail to pay the bills, you’ll finally have a chance to slow down and give more of your time. Giving in all areas will soon become a natural thing, and man it always feels good to give.

Pretend you’re sitting in a meeting at work. Your boss stands up, explains how ‘difficult times call for difficult measures’, and elegantly explains how you should pull forward some revenue into the reporting quarter so that the numbers don’t look so bad. After all, it would be better for the shareholders, for the leaders of the company, and for you too.

You get the sense that if you don’t do it, you’ll lose your job.

But what if instead, you’re completely out of debt, have $100,000 in the bank, and could survive without work for 3 years if you had to? You’d probably think for a second, realize that this is exactly how Enron fell, and refuse to go down that road. You might get fired, you might get promoted for having a backbone, who knows? It doesn’t really matter  because you’re debt free and you’re just doing what you know is right. 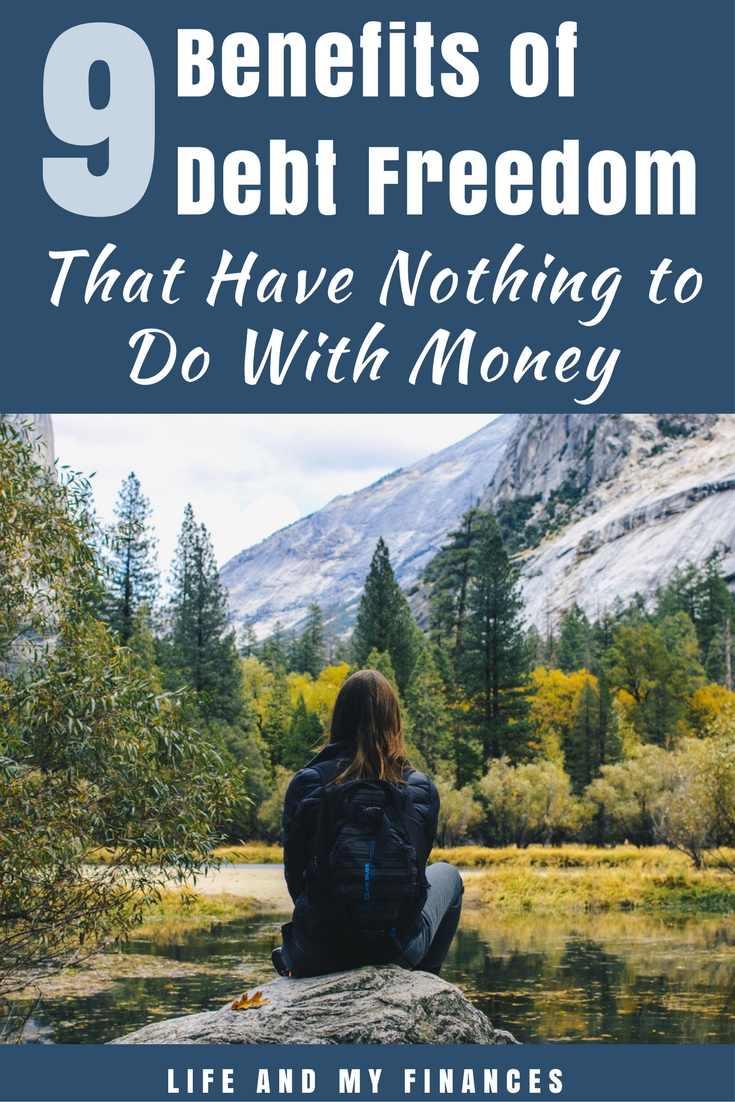 Work in a Job You Love

According to the Daily News, approximately 70% of Americans think negatively about their jobs. You might think, “If you hate your job so much, why wouldn’t you just quit and work somewhere else?” In my humble opinion, it’s because most Americans today are shackled by debt. They know that without the income their financial lives would implode, so they just keep working that job they hate…forever.

Another one of the best benefits of debt freedom: to open your mind about what you want to do, not what you have to do. When you don’t owe anyone anything, suddenly a career change or self-employment doesn’t seem like that big of a risk after all. I don’t have any fancy data to prove it, but I can almost guarantee you that the majority of people that are actually doing what they love are probably debt free.

Related: Run Toward What You Love, Not Away From What You Hate

Be More Respected and Admired at Work

I can tell you from experience, you’re not going to get more respect because you’re completely out of debt…in fact, you’ll probably get a ton of heckling from your co-workers for paying off your house (everyone’s a critic…especially broke people). The respect will come from your attitude and your unshakable presence at work.

We’ve already stated it. Getting out of debt will lead you to a job that you love and will improve your ethical barometer. With these two changes, you’ll start to notice a difference in the people around you. They’ll look up to you, they’ll listen when you speak, and they’ll perceive you as the leader you’ve become. You probably don’t recognize the difference because it’s just happened over time, but there’s a definite difference in you and that difference has created a difference in others.

When my co-workers go on vacation, they take their laptops and they check their cell phones constantly. Some of this is just because they’ve become work addicts, but most of it is because our go-go society has developed a bunch of nervous, high-functioning yes-men that no longer understand the power of stillness.

Of all the benefits of debt freedom, I think this one is the toughest to attain, but it can definitely be found more easily when you’re without debt than when you’re drowning in it.

There’s nothing to worry about. You’re out of debt and you’ve got a nice cash buffer. When you’re on vacation, put all the electronics away and actually take a vacation.

What’s the leading cause of stress today?

According to a recent CBS news report, it’s money:

“Financial worries served as a significant source of stress for 64 percent of adults in 2014, ranking higher than three other major sources of stress: work (60 percent), family responsibilities (47 percent), and health concerns (46 percent).”

Not that big of a shocker, huh? When you’ve got no money, life can be stressful.

This stress, according to WebMD.com, can lead to:

..as well as a plethora of other undesirable issues.

Want to reduce stress and disease? It’s pretty simple. Get out of debt.

Related: Why Obesity and Poverty Often Go Together

Have an Increased Satisfaction in Life

When I was getting out of debt, something happened to me that I didn’t expect. I got a heavy dose of those “colored glasses” that I mentioned earlier in this article.

I distinctly remember riding my bicycle back from the store (I picked up riding again to save more money on gas) and I started to notice the stressed-out, pedal to the metal driving patterns of everyone around me. Just seconds later, my attention was diverted to the puffiest, most beautiful clouds I had ever seen – so beautiful that I stopped my bike just to stare at them for a few minutes.

At that time, I pretty much owned nothing. I had no living room furniture, no bedroom furniture, and my car was worth about $2,000. It was pretty much as simple of an existence as you could get without being homeless, and yet I was more satisfied in that cloud-watching moment than I had ever been in my entire adult life.

Being debt free won’t guarantee satisfaction, but it’ll definitely help you get there.

A fantastic benefit of debt freedom that pretty much no one considers or speaks of is the ability to think of yourself less.

The people that are the most in debt today all share the same love; themselves.

The more you think of yourself, the more stuff you’re going to want to please yourself, and therefore the more debt you’re going to find yourself in. People that are in debt have plenty of compassion for themselves, but rarely think about others. After all, they’ve got their own mess to take care of – how could they possibly help someone else?

Once you get out of debt, you’ll start to think more about what life is all about. Obviously, it’s not just about ourselves, so we naturally begin to think about others and consider how we could make a true difference in this world.

Naturally Strive to Be a Better Person

When we begin to consider others and what we can do for them, we naturally begin to realize that we’re not all that we can be.

Another one of the untold benefits of debt freedom: self-improvement.

Get out of debt, start helping others, and then you’ll just want to do more. And, if you truly want to impact the masses, you’re going to have to work on yourself. That’s just the way it is. None of us are ‘born leaders’ and we all certainly have more to learn about ourselves, about life, and about others. Sometimes it just takes getting out of debt for us to become humble enough to realize it.

The Benefits of Debt Freedom – Are You Ready?

I talk about debt freedom all the time – about the benefits to your cash flow, about eliminating interest payments, and even about a kick-butt retirement – but unfortunately, I usually just get that glazed over look that lets me know they stopped listening pretty much when I started talking…

People get into debt because they love stuff and think very little of the future. But you know what? It’s not all about money, and I think people can really resonate with that.

Get out of debt, and you could:

So what about it? Are you ready to experience the untold, non-financial benefits of debt freedom?