The Average Credit Card Debt is Skyrocketing… Why? How to Fight the Trend

The reports on the average credit card debt are all over the map:

Nobody really seems to have the exact figures, but that’s really not the point here anyway. The story I’m driving toward is the trending of the average credit card debt.

The trend on debt is most certainly rising over the last few years. In fact, not only is it rising, it’s skyrocketing.

Why is this? Is it necessarily a bad thing? And what does it really mean for you?

Elite Personal Finance put together a nice chart of the total credit card debt in America. Do you remember all the stories in 2010 and 2011 about:

Well…according to this chart, those common sense tactics are apparently a thing of the past… 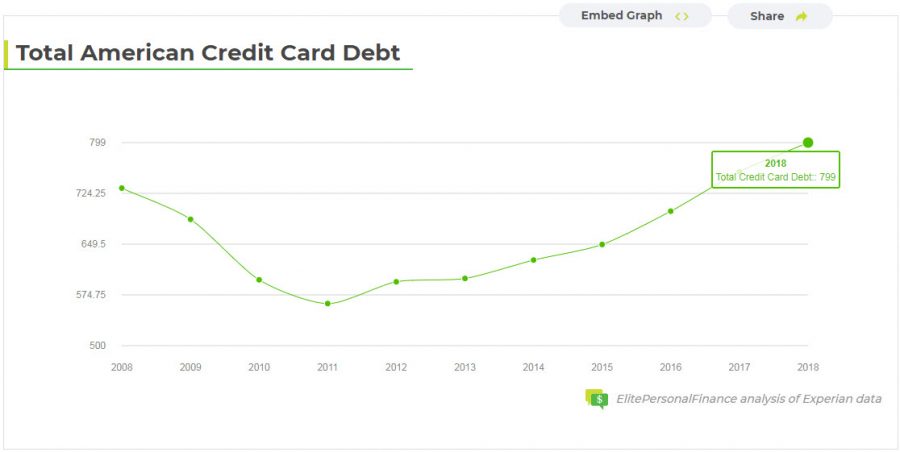 Why is the Average Credit Card Debt Skyrocketing?

So what’s the reason for this?

You’d think this would be the case…but according to the numbers it’s obviously not.

So what’s going on? Why is the average credit card debt skyrocketing?

1) The Bad Memories are Fading

You know the saying, “History repeats itself?” We can point to it again and again in the history books – certain mistakes have had dire consequences, and yet, leaders continue to make them and continue to see the same old disastrous results.

As time goes on, memories of the past grow faint and stories of history become lost or ignored. We fail to remember the past and then find ourselves digging the same problematic hole from years ago.

Historically, there are often decades or even centuries between major mistakes. Today, we seem to forget history much faster – perhaps it’s because our world is now moving at a lightening pace when compared to that of our ancestors…or maybe it’s just because we’re that much more ignorant…

Whatever the case may be, we’ve forgotten about those tough times in 2009 and are somehow certain that those times will never affect us in the same way again….

From 2003 to 2007, the United States GDP grew at a strong rate – approximately 3% each year. During that time, the average credit card rate was on the rise as well (much like it is today).

When the economy is growing, people apparently get more bullish on the future economy. They’re certain that since things have been going well economically, they’ll continue to go well, and therefore their caution on their current financial moves becomes less important.

The trends today are identical. The economy is incredibly strong and there’s no end in sight to the amazing growth that we’ve seen.

So why not just live lavishly in the moment? Good times are ahead! (or so we all think…)

With the continual economic growth and the reduction in unemployment rates, people that were previously unemployed now have jobs, a steady income, and can get approved for credit cards…where previously they may have been denied. This is leading to growth in the number of credit cards issued, and is also inflating the average credit card debt per household.

And, it can also be assumed that those who were previously denied credit cards (and therefore have questionable spending habits to begin with) may go into more debt than the average consumer.

While nearly all of us are employed and experiencing wage increases every year, it’s a proven fact that we can’t really buy much more than we did decades ago.

In other words, the cost of living is inflating just as quickly as our wages are… and according to Pew Research, this has been the case for nearly four decades… 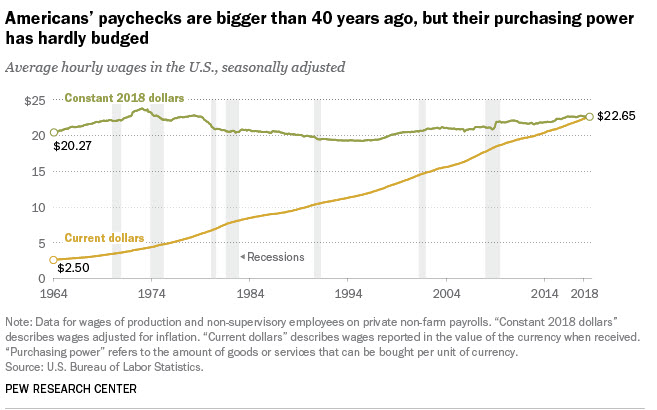 So, while it may seem like we’re better off than in years past, money is just as tight as it has always been…making credit card debt an understandable story.

The longer you’ve got something, the more likely you’ll assume it will be there in the future.

Ever read the book, “Who Moved My Cheese?” It’s about mice who live in a maze and always get fed cheese in the same spot every day. Life was good and there was no reason to move away from the cheese. After all, they had food, shelter, and a carefree lifestyle. Life as good…until it wasn’t.

One day, the cheese stopped coming. The mice never saw it coming and weren’t prepared for the change (curious what happened next? The video below will give you the quick answer, but it’s not the point here so I’m sorry, but I’m going to leave you hanging! ;)).

This is incredibly common. When we’ve had a job for a while and have received consistent pay raises, we just assume that good times will continue.

We spend our money and have fun in the present assuming we can always make more in the years to come (which is why the average credit card debt continues to rise when times are good). The only problem is, the good times rarely last. There’s always a looming bubble these days, and it’s just a matter of time before it bursts…

Today, credit card companies are telling you that you deserve more AND you can earn money while you spend. Sure, it’s only 1% or 2% (while they earn 19%+ APR when you can’t repay them right away), but it’s prompting all of us to use our credit card for everything – even a quick Dollar Store purchase that costs us just $1.06 after tax…

By using our credit card for everything, we’re spending more, tracking our money less, and shelling out more dollars to the credit card companies as we continue to add to – and increase – the average credit card debt.

When I first started this website in 2010, I had companies reaching out to me, asking if they could place a small banner on my hardly-ever-viewed sidebar for $400 a pop (man those were great days! ;)).

They just knew there was a market online and that they needed to get something out there to hopefully attract customers to their product.

Today, companies have become master marketers – both in physical locations and online.

And, with all this information, they can put products and services in front of you that you simply can’t resist. You think you need what they’re offering and they’re undoubtedly getting you to spend more money…which of course means that you’re putting more dollars on the credit card and have a harder and harder time paying it off each month.

Eventually you carry a balance on that card, then have a few unexpected “emergencies”, and before you know it, you’re right at the average credit card debt that you used to shake your head at. 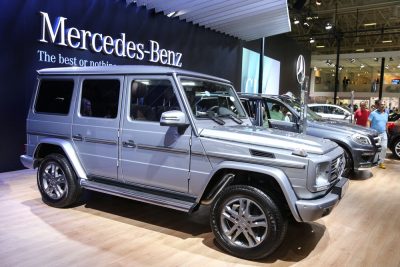 8) Keeping Up With the Joneses Has Gone Viral

After World War II, the economy boomed, subdivisions went up everywhere, and for the first time in history, people were living just a few paces from one another…which enabled them to see…

Soon after, ‘Keeping up with the Joneses’ became a real thing.

Neighbors saw other neighbor’s actions and lifestyles and they wanted the same thing for themselves. Spending inflated and the race for the best life was on.

This desire to live a life that’s just as good as (or better than) someone else prompted overspending, but back then it was a rivalry among similar wage earners that lived in the same parts of town. Today, social media has taken us all on by storm and has taken the Joneses to a whole new level.

Every day, you take out your phone and scroll through Facebook or Instagram (not just once a day…more like 80 times a day). In a matter of seconds you see your friends and acquaintances living their fantastic lives:

You want it too…only, your salary is 1/20th of theirs and you should have no business doing any of these things…

This is the danger of social media today. It inflates the Joneses from the normal salary earner to the top 1% earners… And, if we try to keep up with that, the average credit card debt will certainly continue to skyrocket like we’ve seen it doing in just the past few years.

As Dave Ramsey occasionally puts it, ‘some people worship at the alter of the great FICO score’. They do anything to improve their credit score so they can buy a nice car, a large house, and purchase a few fancy things on credit once in a while.

They do this by first getting a credit card so they can build their credit history and prove themselves as a worthy borrower.

So what’s the big deal? Why is this often portrayed as a bad thing? Two reasons:

If you want to be wealthy someday, you’ve simply got to stop taking on credit card debt.

The Average Credit Card Debt…Are You Ready to Buck the Trend??

Even though the economy is strong, your wages are soaring, and there’s no end in sight to the good times ahead, it’s not time to buy a bunch of stuff and take on the quick debt that you’re certain you’ll be able to pay back in just a few short months.

Resist the urge. Buck the trend.

Instead, heed the advice of your grandparents and ‘make hay while the sun is shining.’ When times are good, don’t spend like you’ve never spent before.

Instead, use your extra money to:

It’s not the sexy choice, but it’s a path that you’ll likely never regret when you get older!

Want to get started today? Follow this link to learn about the Debt Snowball method and download your free debt snowball calculator to see how quickly you could pay off your debts! Many have used it, and a massive number of them have slain their debts. It’s your turn to do the same!

Credit Cards Get Out of Debt Money