“Should I Pay Off My Mortgage?” Depends on the “X” Factor 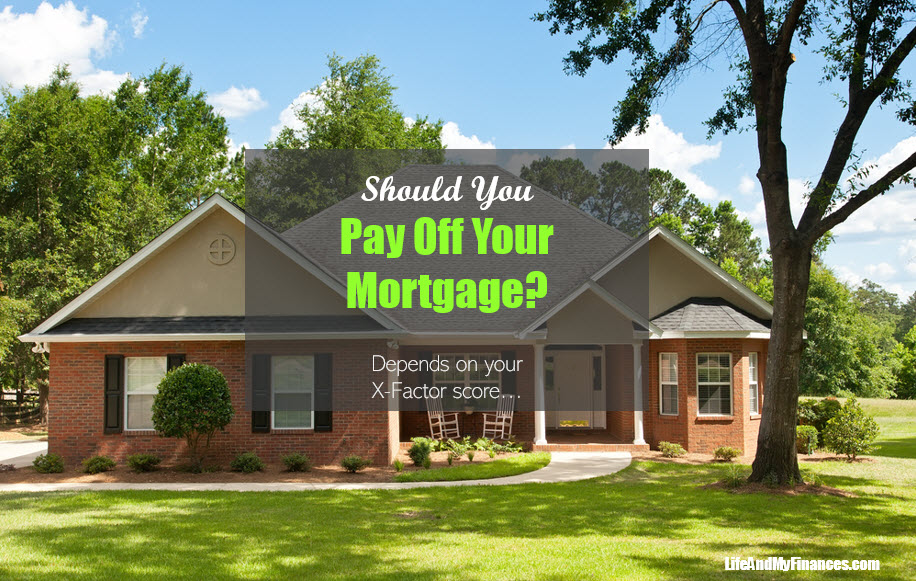 Man, nothing lights up Twitter like the question, “Should I payoff my mortgage?…Or should I invest?” People are either on one side of the fence or the other and there’s no in between! And, based on all the responses over the years, I’d say most (like…70%+) are in the camp of keeping the mortgage payments and using any excess money to invest in the stock market.

Is it really smarter to keep debt and invest excess money? What’s the logic behind this? Should everyone just keep a mortgage for as long as possible?

“Should I Pay Off My Mortgage?” Depends on the “X” Factor

I’ve thought about this question for many years now. I’ve always been in the camp of paying off your mortgage early, but I couldn’t really explain why. My argument always seemed to be missing something.

I’ve found that missing variable in the equation. It’s the “X” factor that will perhaps prompt you to pay off your mortgage, but could dissuade your buddy Bob from paying off his. We’ll dive more deeply into this in a minute.

First, I want to touch on the advice of the so-called “experts”. 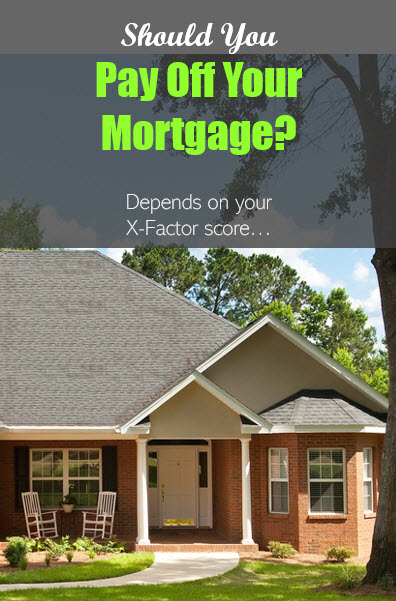 Reasons ‘Experts’ Argue Against Paying Off The Mortgage

When I search for reasons not to pay off a mortgage, the top results come from the biggest players in the finance world:

As a whole, their reasons for not paying off the mortgage can be summed up into 5 bullet points:

While all of these make some sense (emphasis on some), the main reason that people site for not paying off your mortgage is #2 — you can make more by investing instead. It could be true, but it also may not be… I find it’s best to elaborate on this with my personal story.

My Story of Paying Off The Mortgage

When I mailed out that last payment, I was flying high!

Somehow, some way, I did it.

I don’t know if I was quite sure exactly how I did it, but I felt empowered. And I was ready for the next challenge!

Soon after this debt-payoff victory, I decided it was time to tackle the mortgage 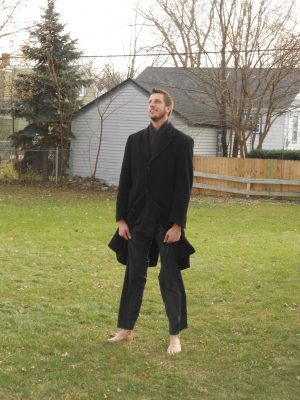 Again, realize that I was still earning $60,000 at my day job and mayyybe $8,000 via my blog. And that was before tax! It really made no logical sense to make this a goal for myself, but I HATED that debt.

That mortgage debt was. going. down.

Related: Free Mortgage Payoff Calculator – How Fast Could You Pay Off YOUR Mortgage?

The Difference Between Paying Off the Mortgage and Investing

When I made that goal for myself to pay off the house, I knew I’d need to do something extra. Here’s a list of some of the crazy stuff I did:

I paid off $54,500 in just over 11 months. That was insane. It made absolutely no mathematical sense for how I did it, but I did it. It happened.

And here’s the kicker question that I have asked myself time and time again:

“What if, instead of paying off my mortgage, I decided to invest instead? How much would I have invested?”

At that time, I was investing about $5,000 a year. If I’m honest with myself, I maybe would have kicked this up to $12,000 a year – this while making minimum payments on the mortgage. In other words, if I didn’t tackle my mortgage debt, I would have bumped up my investment by $7,000 in one year.

By choosing to pay off the mortgage, I earned and paid off $54,500 in that year.

Which would you say is the better way to go?

If you can seriously sit there and tell me that I should have invested, I need you to do two things for me: 1) Leave this site, 2) Never come back.

The obvious answer is the mortgage payoff.

I was SO emotional about getting rid of that debt, I would have done anything to make it go away.

And that’s exactly what I did.

And, at that time I really wasn’t all that passionate about investing, so I probably would have moved my contribution percentage from 10% to 15%, called it good, and then continued to live my life as usual without much change.

The “X” factor was my emotional response when it came to my mortgage. On a scale of 1 to 10, from “not really interested in paying it off” to “I want this thing gone, like yesterday!!”, I was a 10 for sure.

My emotions carried me to an extreme that I didn’t even know was in me, and it made paying off the mortgage the absolute right choice for me.

Related: Pay Off The Mortgage Fast (Like Us) With This Free Tool!

“Should I Pay Off My Mortgage?” Let’s Figure Out Your “X” Factor Score

If, on your debt journey, you have already:

…then it’s time to ask yourself the question, “Should I pay off my mortgage?”. And, it’s going to depend on your X-factor score.

How Badly Do You Want Out of Your Mortgage?

If debt really doesn’t bother you and you’d rather just keep your mortgage because you believe in the benefits that may have for you, then you’re probably a 1 or 2 on the Mortgage Payoff “X” Factor Scale.

If you’ve considered paying off the mortgage, but you do like the idea of keeping future savings stashed away as a just in case (or you’re still tossing around the idea of renovating the house instead), then you’re probably a 4 or 5 on the scale. Paying off the house debt isn’t right for you either.

But, if you absolutely love the idea of calling your home YOURS (and not the bank’s), and you think you’d scale up your earnings to pay the house off faster, then paying off the debt is totally for you. You’re an 8 or more on the scale.

Related: The Real Reason You Should Be Paying Your House Off Early

Should I Pay Off My Mortgage? Is My “X” Factor Score an 8?

If you’re not an 8, don’t even bother trying to pay off the mortgage.

The only thing you’ll accomplish is “earning” 2-3% on your mortgage interest, while missing out on 10% returns in the stock market. Not a great trade.

However, if you’re absolutely juiced up to get out of mortgage debt and you literally can’t think of anything else, you’re going to:

In the end, you’ll pay off your house 10 times faster than it was originally scheduled. At 2-3% interest, this is kind of like earning 20-30% on your house pay-off! Then, once that’s gone, you can aggressively invest in the market because you no longer have that mortgage payment!!

So where are you? Take the poll below and leave a comment as well! We always love to hear from you!

Get Out of Debt Housing Money Mortgage Payoff