Yearly Interest on 1 Billion Dollars: What Does it Look Like? 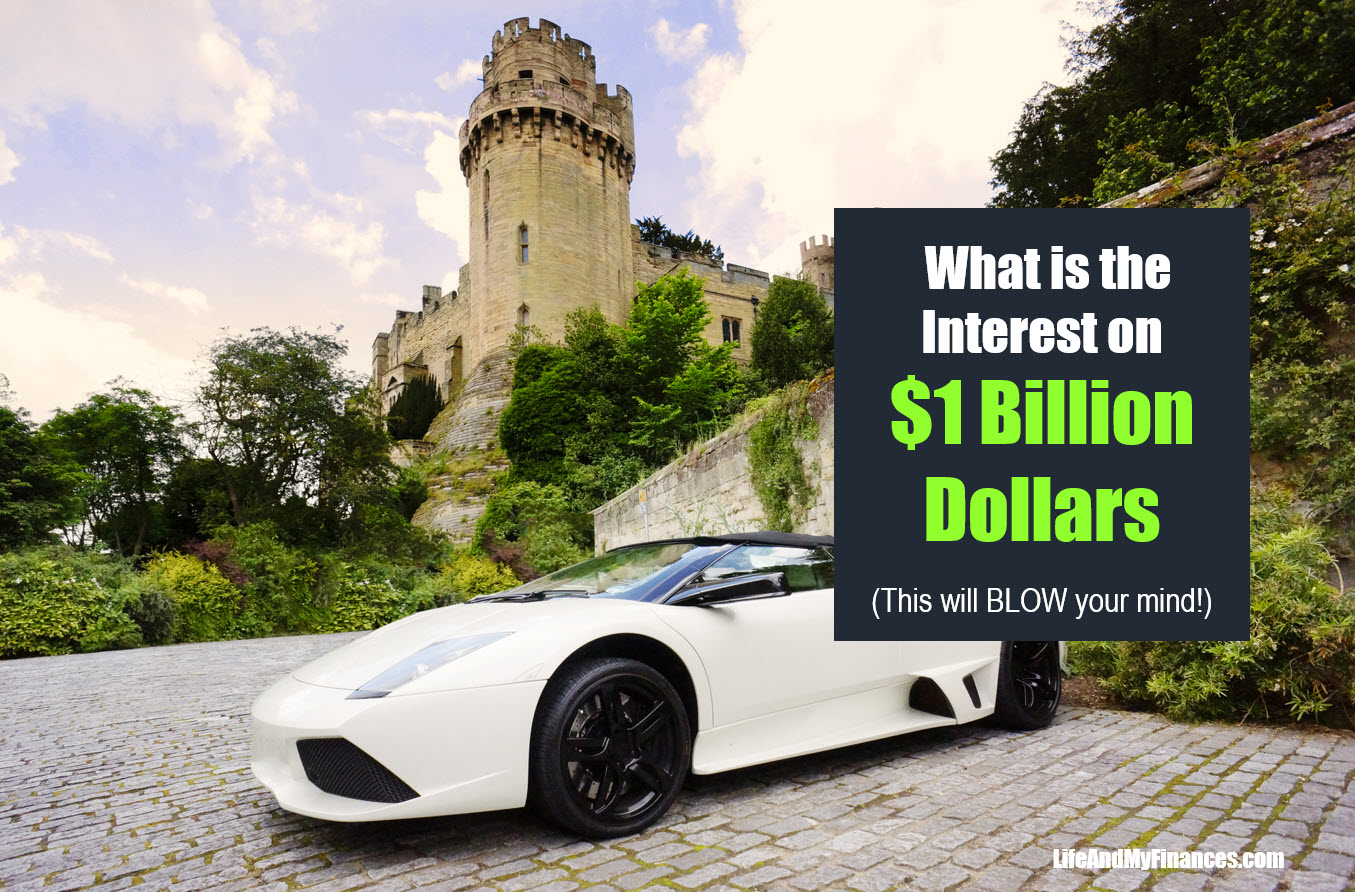 Let’s talk about it and see what it would be like to have a billion dollars!

Can you live off a billion dollars?

The first question that’s circling the internet right now is, “Can you live off a billion dollars?” 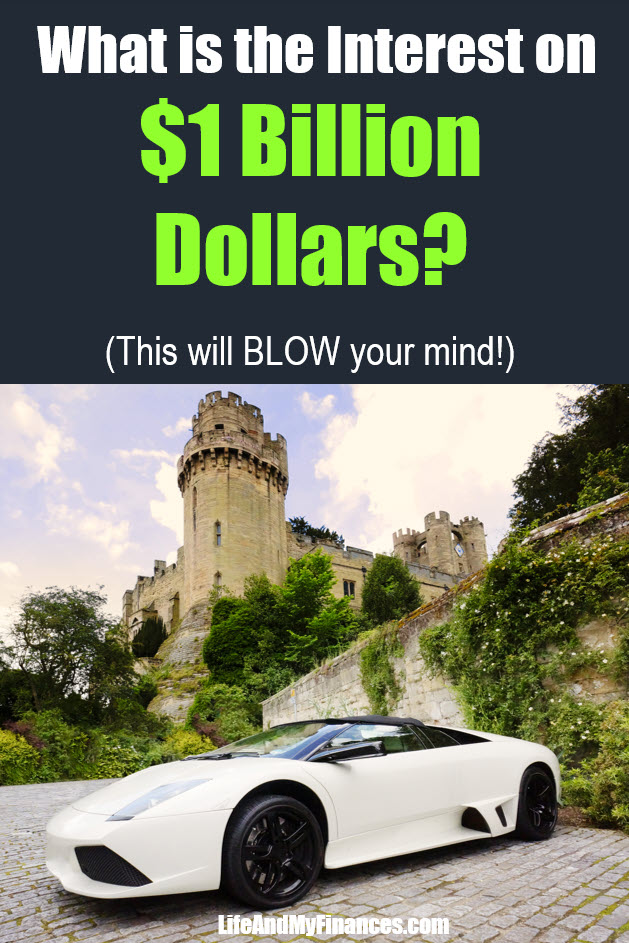 Let’s take a look at what you could spend a billion dollars on.

Besides your regular cost of living, healthcare, etc., you could also:

And that’s just a start.

How long would it take to spend 1 billion dollars?

Let’s say you decided to spend $10,000 a day for the rest of your life. How long could you live on 1 billion dollars before you ran out of money?

Even if you earned no interest on your billion dollars and spent $10,000 every single day of your life, you could still live for 270 years on 1 billion dollars! In other words, you’d NEVER run out of money!

What do billionaires invest in?

Billionaires don’t often put their money in index funds and step away. They like to make things a bit more interesting. Instead of dull slow-growing investments, they might invest in real estate, art, or collectibles.

Want to pretend you’re a billionaire for a second? The platforms below make it possible. AND, they’re even quite profitable.

What about a million? Can I retire with a million dollars?

Okay, maybe the billion dollar goal isn’t quite right for you. The second question many are asking (once they realize they’ll never earn a billion dollars…) is “Can I retire with a million dollars?”.

Just because you’re not a billionaire, that doesn’t mean you can’t retire and live comfortably. Many people retire with a million (or less!) and are able to keep up with their current lifestyle.

The key is to be able to spend your money wisely and not let “lifestyle creep” start to affect you.

Related: Can You Retire With 1.5 Million Dollars? (Hint: You Can!)

Do billionaires have billions in cash?

“An individual with assets or a net worth of at least one billion currency units such as dollars, euros, or pounds”.

Related: What Can I Do With 5 Million Dollars?? (Retire? Buy a Ferrari? A Yacht??) 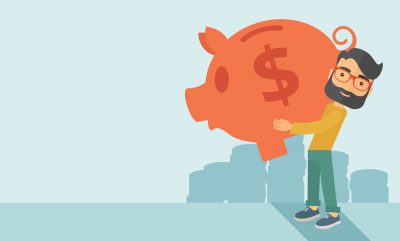 What is the annual interest on a billion dollars?

What would be the interest on 1 billion dollars per year?

Based on some research, here’s what the average interest rates look like currently:

Those are the interest percentages, but what does that mean in terms of dollars?

What is the interest on 1 billion dollars per year?

So what is the answer? What is the income on $1 billion dollars per year?

Related: Wondering How Much Money You Need to Retire? (The Formula is Easy!!)

What is the interest on 1 billion dollars per day?

If you invested a billion dollars with the interest rates below, here’s how much you would earn each day:

If you had a billion dollars, you could earn more in a day than most people do in an entire year!

What is the interest on 2 billion dollars?

So, what is the interest on 2 billion dollars? Well, you would just double what we discovered above!

Related: What Is The Interest on 4 Million Dollars? (…And Will Your Money Last??) 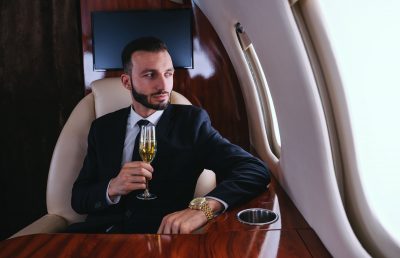 How to Earn $1 Billion Dollars

Alright. So how do people do it? How on earth do they earn $1 billion dollars?

You’re not going to earn a billion dollars by investing $1,000 a month into mutual funds. Sorry, it’s just not going to happen.

If you want to be a billionaire, you’re going to have to start a business, work your butt off, and constantly re-invest the majority of the profits back into it.

Related: How to Become a Billionaire Family

How Long Would It Take to Make 1 Billion Dollars?

The only way to truly earn a billion, without interest or inheriting any money, would be to earn $20 million dollars a year. Even then, it would still take you 50 years to earn $1 billion. 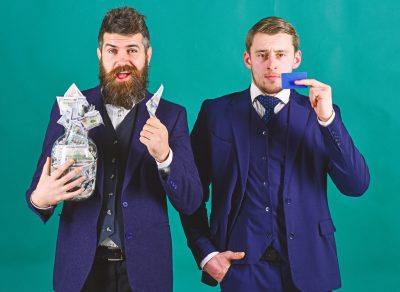 How Long Would It Take You to Earn 1 Billion Dollars With Investing?

As Einstein supposedly once said, “compounding interest is the 8th wonder of the world”. So what if you consistently invested a fair amount of money? Then how long would it take to make 1 billion dollars?

Then how long would it take to make a billion dollars?

If you invested $2,000 every single month, never spent a dime, and always earned 10% a year, you would become a billionaire on your 100th birthday!

With the scenario above, it would take you 84 years to become a billionaire via simple investing.

That’s actually not too bad!

Sure, you’d never get to enjoy your money, but you’d leave a tremendous amount of wealth to your family!!

Investing a Billion Dollars – Where Do Billionaires Put Their Money?

As we said before, most billionaires are business men and women.

They work tirelessly. They love what they do. Heck, they simply live and breathe their businesses.

And, it should come as no surprise that much of these individuals’ wealth is tied up in those businesses! Where do billionaires invest? In themselves! In their business! 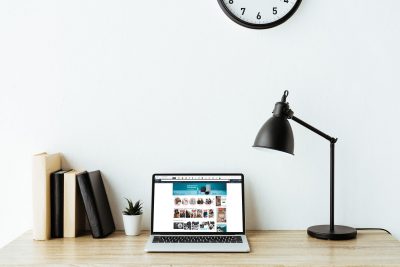 Where is Jeff Bezos’s money stored?

Around 90% of Jeff Bezos’s fortune is in Amazon stock holdings.

And, as we already stated above, the same goes for most of America’s wealthiest individuals. But why?

The answer is quite simple.

If they cashed in on their holdings, that would make their wealth “realized” and they would be taxed on their gains. BUT, if they just leave their wealth in the value of their business, they aren’t personally taxed on those gains!

So, if they don’t need the money (and, as we established before…no one needs 1 billion dollars), then why take it out and pay taxes on it?

You may as well just be a well-known billionaire and enjoy the fame while it lasts!

Other Questions People Ask When Thinking About Billions of Dollars…

When researching the data for this post, I quickly realized that people have quite the array of questions when they ask about billions of dollars!

Most questions came back down to earth a bit and revolved around saving up millions of dollars, which is totally fine! No one needs a billion dollars. For many, saving up a couple million does the job quite nicely!

What is the yearly interest on 2 million dollars?

And, what is the yearly interest on 2 million dollars? Considering that many millionaires reach 1 to 2 million before retirement, you may be wondering how much you could earn on your money.

The yearly interest on $2 million would be $160,000 a year (when assuming an 8% earnings rate). That could easily be money to live on year after year!

Related: What Is The Interest on 2 Million Dollars? (Is It Enough to Retire??)

What is the interest on 10 million dollars?

Now, with $10 million dollars, you obviously won’t earn as much in interest as you would with a billion.

The average 8% annual interest on 10 million dollars would result in about $800,000 a year. That’s still more than what many people will save in a lifetime though, so it could be worse. 😉

Related: What Is The Interest On 10 Million Dollars? (And Is It At All Necessary??) 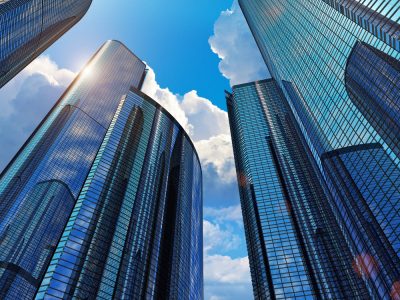 How many bank accounts should I have when building wealth?

Now that you know about interest and how much you could make with both a billion and a million or two, let’s talk about bank accounts.

How many bank accounts should you have when building wealth?

Experts note that you should have at least 4 bank accounts. These will be both for budgeting, saving, and building wealth through investing.

How would this work for the average person?

Related: Should You Share Bank Accounts With Your Spouse?

Should I keep all my money in one bank?

What about using multiple banks? You’ve heard that some wealthy people use more than one bank to house their money. Should you keep all your money in one bank? Or split it up?

If you have less than $250,000 dollars, sure! But, if you have more than that, it’s recommended to split it up. This helps ensure that you have full FDIC insurance coverage in case your bank fails.

Related: How Do Banks Invest Money From Depositors?

Where do millionaires keep their money?

Forget billionaires for a second. Where exactly are millionaires keeping their money?

Considering the fact that FDIC insured banks only insure $250,000 each person, they have to have the rest somewhere — right?

Well, that would be correct. Millionaires put their money in many different places and classifications. This includes…

Related: When Should You Get a Financial Advisor? A Question We’re Asking Ourselves…

What Is The Interest on a Billion Dollars? Summing It Up!

As you can see, the interest on a billion dollars is a lot. More than what most people could spend their entire lives.

If you would earn just 1% on a billion dollars, you’d earn $10 million a year. That’s simply insane.

Chances are, you’re not going to be a billionaire, but even if you save up just $1 million bucks, that’s still a heck of a lot better than nothing. And, you could still live a very fulfilling, happy life!

So what about you? Do you think you’ll be living off the interest of a billion dollars? Or something less?